Donald Trump is a hopeless cable news addict: Here's why that matters

Americans are abandoning TV news en masse, but our next president is about to make it more relevant than ever 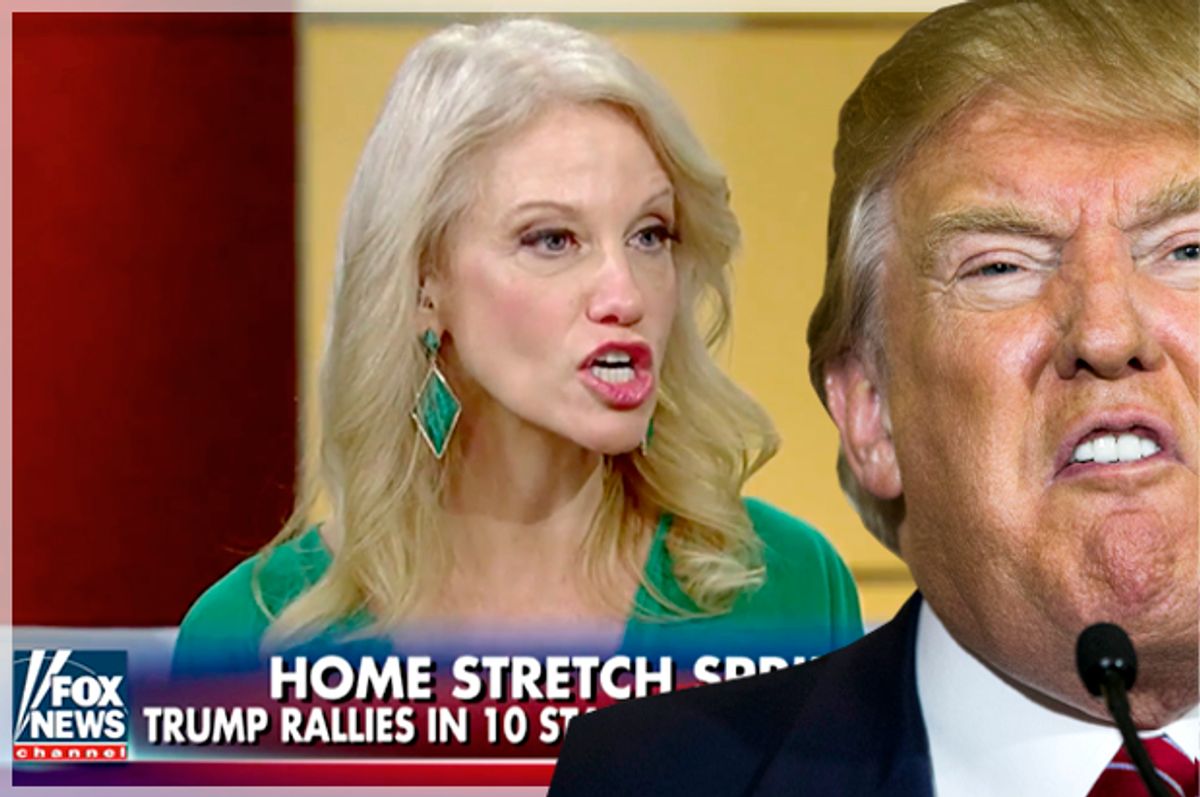 Whether you agreed with their policies or not, previous presidential administrations confined their internal policy battles to white papers and think-tank reports. It’s becoming clear now that the Trump White House will once again dispense with convention and venture into new terrain.

The biggest clue about how the incoming Trump administration will handle internal debates is to look at the fuss that started over Thanksgiving weekend after top Trump adviser Kellyanne Conway tweeted that she was receiving a “deluge” of complaints about the possibility that 2012 Republican presidential nominee Mitt Romney might become secretary of state.

Some political observers have argued that the idea of making amends with the former Massachusetts governor is simply a ruse meant to show just how much president-elect Donald Trump has conquered the feckless Republican elites who opposed him. Conway’s public campaign against Romney, in that reading, is nothing more than a preview of the further humiliation that Trump will administer later.

That seems unlikely, however. Trump’s biting criticism of past GOP foreign policy failures has apparently made it difficult for him to fill senior positions in the defense and intelligence bureaucracy. Hiring Romney, or at least leveraging his status as the de facto leader of NeverTrump conservatives, would certainly help end the alleged boycott. Even though Romney has drastically different foreign policy views from Trump, having his stamp of approval in some way might help the new administration woo experienced personnel.

The public overtures to Rep. Tulsi Gabbard, a military veteran who is a liberal Democratic congresswoman from Hawaii, also serve as a warning to recalcitrant Republicans: If you don’t get on board, the Trump administration might hire Democrats instead.

Conway’s public airing of what are usually private internal debates is almost certainly a preview of how policy is going to be formed within the Trump White House: via televised debate shows. For an insight into the veteran GOP pollster’s motivations, one need look only to an on-the-record statement she gave to New York magazine writer Gabriel Sherman just last month:

The key to managing Trump, she told me, is to let him feel like he is in control — always. “It all has to be his decision in the end,” she said. . . .

She tried to get him to improve his image with women by appealing to his business sense. “You have to find new customers,” she told him. Another strategy she employed with him stemmed from the fact that Trump is such an avid cable-news viewer: “A way you can communicate with him is you go on TV to communicate,” she said.

That strategy makes sense once you realize just how much television news the president-elect watches. According to Trump biographer Marc Fisher, the political rookie watches “enormous amounts” of cable news programming.

Last December long before he secured the GOP nomination, Trump told “Meet the Press” host Chuck Todd that he watched political-debate programs for military advice. “Well, I watch the shows,” Trump said. “I mean, I really see a lot of great, you know, when you watch your show, and all of the other shows, and you have the generals, and you have certain people you like.”

That remark could be construed as mere flattery, but later on in the same interview, the future president-elect said that he liked George W. Bush-era United Nations ambassador John Bolton, a Fox News staple who is now also in the running as a potential secretary of state. “I think he’s a tough cookie, knows what he’s talking about,” Trump said.

The soon-to-be 45th president’s view of TV is a pretty dramatic contrast from that of his predecessors. By his own admission, President Barack Obama watches almost no news television. Former president George W. Bush similarly didn’t watch TV news, preferring instead, like Obama, to restrict himself to sports.

Many of the policy professionals I’ve spoken to over the years can’t stand watching TV news; they perceive it as out-of-date and dumbed down. That’s frequently the case. Then again, one could argue the same about the one-page executive reports that presidents and other top officials frequently use to summarize voluminous briefing papers.

Trump and his staff have already come under media fire for ditching his traveling press pool and refusing to acknowledge concerns about potential conflicts of interest arising from his many business holdings around the world, along with the fact that he is apparently turning to his children for policy advice while also allowing them to run his companies. If other high-level staffers decide to pick up on Conway’s debating strategy, however, the Trump administration is likely to be much more transparent in at least one way.

Cable news, like the larger paid-TV industry, is losing subscribers like crazy. It may find a new lease on life, however, if the most powerful person in the world is still tuning in. The fate of the world may soon depend on what the talking heads decide to gab about.