Donald Trump is hiring Tom DeLay's lawyer as White House counsel: There are no words 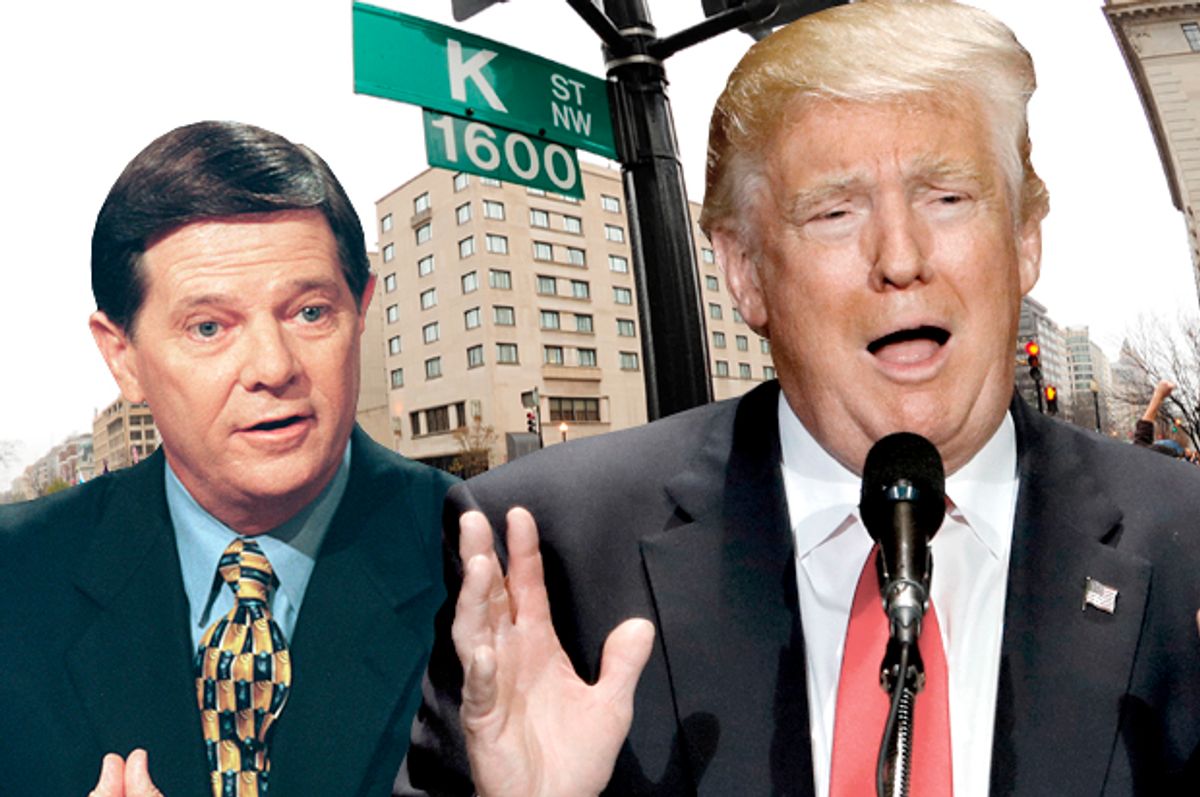 The news media finally seems to have caught up to the notion that Donald Trump's international business dealings just might create a bit of a conflict of interest when he's serving as president of the United States.

The New York Times published an investigation over the Thanksgiving weekend detailing some of Trump's business associates around the world and how they see his election as a "yuge" opportunity to make a lot of money by partnering with the president-elect's "brand" — with his family will undoubtedly sharing in the profits. At this point, it appears that Trump has no intention of doing anything more than superficially distancing himself from his business and pretending that's a "blind trust."

In his interview with the Times last week, Trump explained that he had thought he would have to "do something" and had since been told that "the president can't have a conflict of interest," immediately evoking memories of Richard Nixon's famous quote: "If the president does it, it's not illegal." It's a very similar notion. The idea is that the president's job is so unique that normal rules and laws do not apply. The full quote is even more incoherent:

Now, according to the law, see, I figured there’s something where you put something in this massive trust and there’s also — nothing is written. In other words, in theory, I can be president of the United States and run my business 100 percent, sign checks on my business, which I am phasing out of very rapidly, you know, I sign checks, I’m the old-fashioned type. . . . But in theory I could run my business perfectly, and then run the country perfectly. And there’s never been a case like this where somebody’s had, like, if you look at other people of wealth, they didn’t have this kind of asset and this kind of wealth, frankly. It’s just a different thing.

But there is no — I assumed that you’d have to set up some type of trust or whatever and, you know. And I was actually a little bit surprised to see it. So in theory I don’t have to do anything. But I would like to do something. I would like to try and formalize something because I don’t care about my business.

President Barack Obama tried to warn Trump that he needed to find a White House counsel who would give him strong, unbiased advice and help him navigate these treacherous ethical waters. Trump clearly didn't listen. In fact he went out of his way to name as his chief counsel one of the most notorious lawyers in Washington, Don McGahn, the man best known as the ethics lawyer to corrupt former House whip Tom "The Hammer" DeLay, a man who pretty much filled the swamp Trump promised to drain. As the architects of the "K Street Project," which strong-armed lobbyists into hiring only Republicans if they wanted to do business with the government, DeLay and McGahn were instrumental in institutionalizing GOP self-dealing and corruption during the George W. Bush years.

DeLay had Texas tear up its 2000 redistricting plan after Republicans won the majority in 2002, and McGahn defended him when DeLay was tried for illegally funneling campaign cash into a PAC to help Republicans win. (He lost the case, but it was reversed on appeal.) Of course, McGahn also had been the lawyer who advised him that the scheme was legal in the first place.

McGahn helped DeLay with a Russian pay-to-play scheme and a subsequent Racketeer Influenced and Corrupt Organizations Act lawsuit. As the in-house counsel for the National Republican Campaign Committee, McGahn oversaw the raising of more than $625 million from 2000 to 2008 with almost no oversight and no rules. The scheme finally ended when a Republican congressman insisted on an audit and the FBI indicted the treasurer on embezzlement charges.

Naturally, George W. Bush then made McGahn a member of the Federal Election Commission, where he did everything in his power to undermine the campaign finance laws — and succeeded — after which he went to work for the Koch brothers — of course. In 2016 he joined the Trump campaign, and he will now be White House counsel.

The idea that this man is going to give Trump guidance on how to deal with conflicts of interest in an ethical manner is laughable. His career has been spent counseling his clients on how to do the opposite. Like Steve Bannon, Michael Flynn and Jeff Sessions, it's yet another example of Trump hiring the worst person in America for the job. It's almost as if he's trolling America, just messing with our heads for the fun of it. And like nearly all forms of trolling, it's not funny at all.