I miss the old Kanye, too: Stop treating this breakdown like celebrity gossip — it's a cry for help

Kanye West doesn't need boycotts or social-media snark. He needs us as a community to take mental health seriously 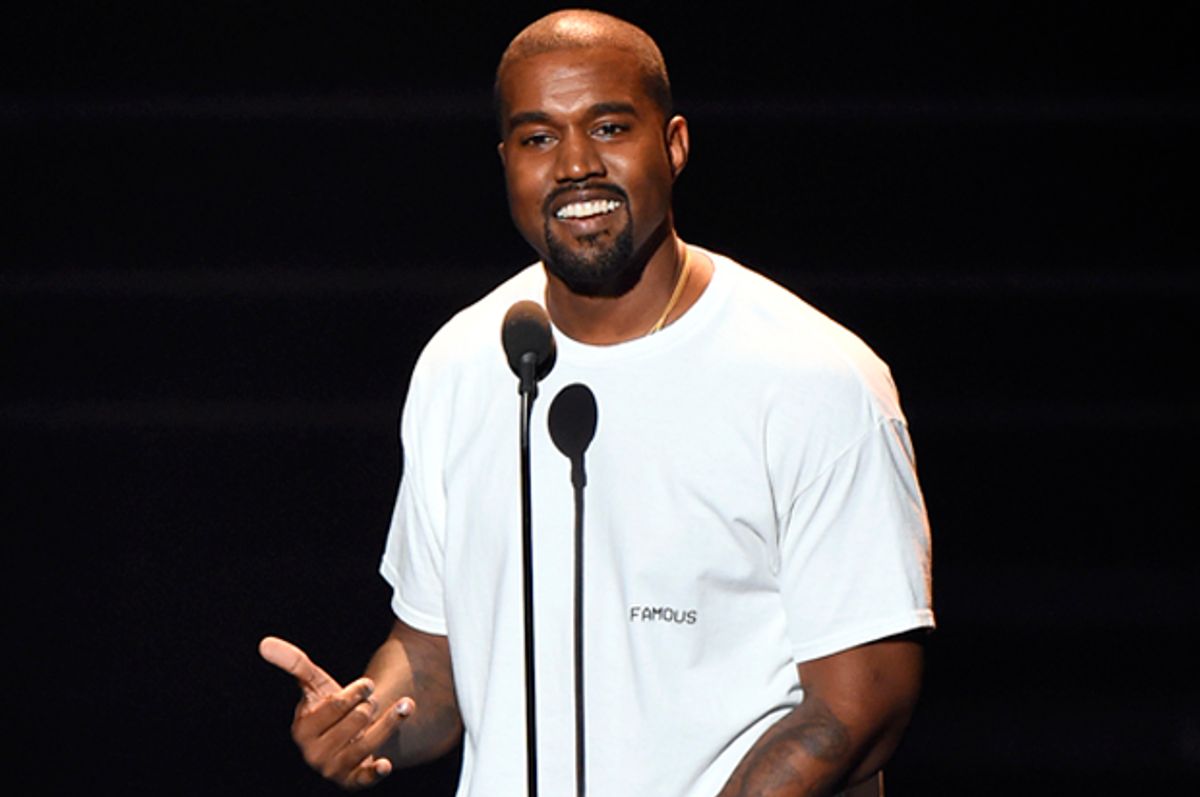 Earlier this month, Kanye West went on a major rant in Sacramento, California, during one of his $250-plus-a-ticket concerts before canceling that show, along with the rest of his Saint Pablo Tour, and being admitted to UCLA Medical Center where he currently is being evaluated. On stage, the 39-year-old rapper touched on a plethora of topics from the way DJ Khaled controls radio and how he loves Drake to the role that race plays in Barack Obama’s legacy. Oh, and he mentioned that he's a Donald Trump supporter and is ready to make America great again.

Ye’s fans were clearly irritated by his speech but really went crazy when he praised Trump and started talking about the wall. At a rally, Trump responded, “I’ll never say bad about him. You want to know why? Because he loves Trump. He goes around saying Trump is my all-time hero.”

Added Trump: “So to Kanye West, I love him. In a few years I might have to run against him, so I’ll take that back, but he’s been so nice to me. You people saw the scene,” he said. “I’ve been a counterpuncher. I only hit people when they hit me. Kanye West has been so great. I would never say bad about him because he says such nice things about me.”

I miss the old Kanye — the Kanye that Kanye rapped about in his song “I Love Kanye” on "The Life of Pablo":

I miss the old Kanye, straight from the go Kanye
Chop up the soul Kanye, set on his goals Kanye
I hate the new Kanye, the bad mood Kanye
The always rude Kanye, spaz in the news Kanye
I miss the sweet Kanye, chop up the beats Kanye
I gotta to say, at that time I'd like to meet Kanye

He was our champion, a conscious emcee for us millennials, the guy who gave us “College Dropout” and was brave enough to say on TV during a Hurricane Katrina fundraiser what we all felt: “George Bush doesn’t care about black people!”

Young West pushed his fans to embrace vulnerability. He put the ills of materialism on front stage with his video, “All Falls Down,” where he chases a confused Stacey Dash through the airport. You know, back in the '90s my uncle used to always say, “Live long enough D, and you will see it all.” Fast forward to 2016 and our champion is praising Trump, Stacey Dash is a Fox News pundit and Glenn Beck has become a MSNBC voice of reason. Yeah.

Twitter users have waged war on West, advocating for a boycott of his sneakers, music and everything else he’s affiliated with. Charlamagne Tha God, host of "The Breakfast Club," tweeted, “Kanye just trying to sell his sneakers he got coming out this week. If you really upset with him don’t buy his kicks.”

I see where the anger comes from. Any black person in this political climate, with the exception of Ben Carson and Omarosa, should be upset when another black or sane person starts singing Trump’s praises­­. But Kanye is obviously dealing with deeper issues than flawed politics and has been for a while. Like always in my community, we choose to ignore it.

A friend of mind recently made it to see 37. He didn’t want a party; he just wanted to kick it with the few of us who actually made it up out of the 1990s and early 2000s, too. Four of us watched him speak in awe because he actually made it to 37, which is like making it to 87 where we are from. Like an OG should, he sat at the head of the table telling us how we could achieve the same. “Drink a lot of water, cross your Ts, fall back from the fried fat, dot your Is, don’t sip every day and take vacations, lil’ bros,” he told us over a celebratory glass of Hennessy.

We held our drinks high and clinked the glasses together in honor of his life. As the night continued we traded war stories — the times we heard bones crack, saw guts, stitched contusions and the multiple times we were on the wrong the side of a gun. (None of us are or have served in the military.) We’ve never been to therapy and probably will never go.

That’s the issue — so many of us, including myself at times, are dripping in trauma while taking these mental health issues as a joke. Charlamagne has it wrong. People are always going to buy Kanye sneakers — he needs no help with that, as the brand has become iconic and stretches far past his musical accomplishments and annual outbursts — but Kanye needs help in dealing with his trauma and everything else that comes with losing your mom and constantly being discredited under a microscope.

And while we are mentioning boycotting Kanye over Trump rants, let’s acknowledge that he is just a dude with a sponsorship from a shoe company and not anywhere as rich or effective as corporations that have benefited from slavery in this country — corporations like Lehman Brothers, Aetna, JPMorgan Chase, New York Life, USA Today, Barclays and Brooks Brothers, to name a few. Ripping Kanye apart is easy. Let’s do the right thing and support all our fellow brothers and sisters with mental illness while directing the anger at the people who deserve it.