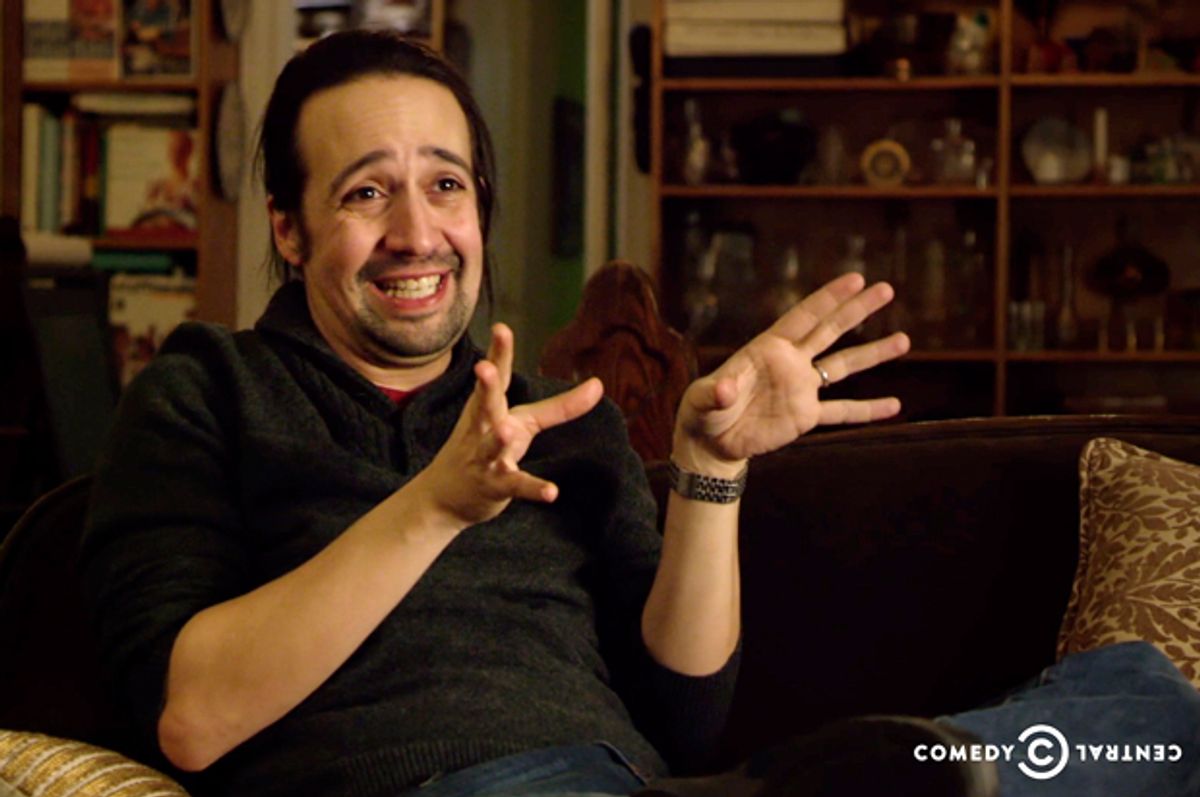 It’s safe to assume that at some point or another over the past year, someone you know intentionally treated her brain cells like rum cakes. That is, she soaked the senses out of them with booze. Is it really necessary to list the reasons for getting lit in 2016? Mass mourning (rest in peace, Shepherd Book and Carol Brady) and hard-earned exultation (Cubs win!) are fine excuses. Maybe a person simply wanted to give the ol' cerebral cortex a beach vacation from the insanity unfolding in front of our eyes. (See Salon’s home page. Also see “Idiocracy.”)

History’s accounting of this year will not be kind. But as personal histories go, this was an amazing year to be “Hamilton” creator Lin-Manuel Miranda and to witness his ascent to stardom.

Miranda’s latest stop on his fame tour is Tuesday’s episode of Comedy Central’s “Drunk History,” airing at 10:30 p.m., and fans have been anxiously awaiting the episode since it was announced over the summer. In it, Miranda once again tells the story of Alexander Hamilton’s legendary rivalry with Aaron Burr. Only here, he does it without the embellishment of song and dance and while under the influence of copious amounts of liquor.

Miranda has enjoyed a steady stream of success over the past year: He composed songs for Disney’s animated film “Moana” before “Hamilton” became a phenomenon, hosted NBC’s “Saturday Night Live,” and starred in PBS’ behind-the-scenes look at his Broadway smash, “Hamilton’s America.”

After Donald Trump targeted the cast of “Hamilton” for imploring Vice President-elect Mike Pence to honor diversity, Miranda became a symbol of grace and reason in the struggle to honor free speech and artistic expression. He has a lot of wonderful reasons to do a few celebratory shots, and it looks like he opted to do most of them for Comedy Central's benefit.

Currently in its fourth season, “Drunk History” evolved from a YouTube series into one of those addictive television baubles that’s legitimately hilarious and, weirdly enough, educational. Co-created by Derek Waters and directed by Jeremy Konner, the original viral videos were only a few minutes long and went on to find homes on FunnyOrDie.com and HBO, for a short time. Comedy Central acquired the concept as a full series that debuted in 2013, and each half-hour episode includes several stories — the equivalent of around three of those videos — that illustrate a specific subject.

In each "Drunk History" segment, a thoroughly hammered narrator slurs through an account of some lesser known person or event from the past that has shaped who were are today. While the designated sot stumbles through said tale, an assortment of familiar actors in period garb re-enact the story as described more or less exactly, flubs and all. And the star power the show attracts is impressive: Past episodes have featured Jack Black as Elvis, Laura Dern as pioneering journalist Nellie Bly and Weird Al Yankovic as Hitler.

Tuesday’s installment represents a departure from the usual format since Miranda gets the floor — or, rather, the couch — to narrate the full episode, which is a first for “Drunk History” and completely warranted. The man became a household name by creating an enthralling version of the story that runs around two hours and 45 minutes long. Asking him to tell it in around 22 minutes? No problem.

Miranda's "Hamilton" episode also represents “Drunk History” coming full circle, as it were. The series’ very first YouTube video featured comedian Mark Gagliardi discussing the dispute between Burr and Hamilton with a pre-“New Girl” Jake Johnson as Burr and Michael Cera playing Hamilton, and doing so with the anachronistic flourish of depicting the Founding Father as a man who wore Vans sneakers and used a mobile phone.

The cast of re-enactors in Miranda’s “Hamilton” episode is much larger than that of the first video, and includes musician Dave Grohl, Bokeem Woodbine and Cera’s “Arrested Development” co-star Tony Hale. Perhaps in a nod to Miranda’s intentionally diverse casting for the stage, the producers placed Alia Shawkat (also of “Arrested” fame) in the role of Hamilton and cast “Parks and Recreation” star Aubrey Plaza as Burr.

Other “Drunk History” storytellers have to bone up on their subject before they start tippling; Miranda, in contrast, is an Alexander Hamilton expert who immersed himself in the man's biography for several years. As such, he can recount Hamilton’s exploits while utterly stinko and manages to remain elegant nevertheless. And it turns out that he is the sort of inebriate who has to declare, “Oh, shit, I’m drunk!” before a viewer realizes that he’s good and sloshed. The man barely slurs.

Miranda’s drunkenness emboldens him to throw in a few details that he couldn’t bring to the stage, too, including the fact that the ship that brought Hamilton from the British West Indies to New York caught fire. “Like, 'Here comes sick-ass Hamilton on a flaming ship!'” Miranda shouts. “'Your ass will never be the same!'”

Miranda raises the bar for "Drunk History," without a doubt. But the ease in his execution also decreases a measure of the show’s disarming silliness. Simply put, Miranda doesn’t make any mistakes, and that’s a problem for a comedy that thrives on sloppiness.

A typical narrator's intoxicated giddiness adds to the goofy, childlike humor of the re-enactments, as do his tipsy flubs and asides. Those are nearly absent here, save for a moment when one of Miranda’s very famous friends calls in and the star answers because he failed to silence his phone. Waters incorporated this interlude into the episode, and it's quirky enough to earn a smile, at least. It also smacks of self-glorification.

Granted, a person could gain knowledge from far less reliable sources than Miranda and “Drunk History” itself. The truth is that most TV viewers haven’t cracked open a history book since they could legally purchase a six-pack. And the most memorable chapters of History 101 probably don’t include any mention of people such as Mary Phelps Jacob, inventor of the brassiere, or Claudette Colvin, whose arrest for refusing to relinquish her bus seat to a white person inspired Rosa Parks.

“Drunk History” has covered these stories with as much aplomb as Tuesday’s journey into the Burr-Hamilton duel. Of course, the stage production of “Hamilton” represents a finer coupling of history and art. You can buy a ticket to a show taking place months from now at insanely inflated prices, and if you don’t live in one of the cities where it’s playing, you’ll have to arrange for transportation to get there as well as lodging. “Hamilton” is worth the effort and expense, I’m told.

But for the time being, Miranda’s “Drunk History” turn provides a more affordable means of escaping from the horrors of the year that was, is, and for a little while longer, continues to be. Settle in, pour a glass, and bottoms up.