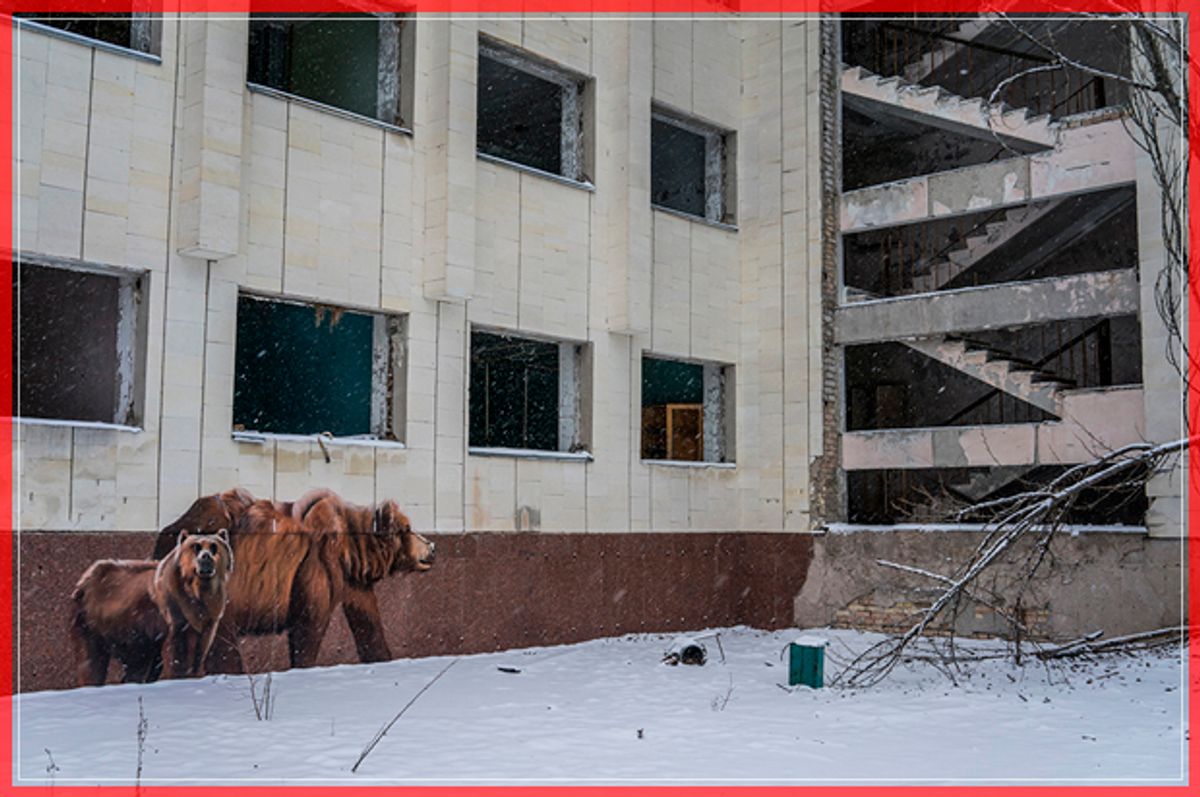 PRIPYAT, UKRAINE - NOVEMBER 29: Graffiti on a building on the main square in the town of Pripyat, which was abandoned following the Chernobyl nuclear accident, on November 29, 2016 in Pripyat, Ukraine. On April 26, 1986 workers at the Chernobyl nuclear power plant inadvertantly caused a meltdown in reactor number four, causing it to explode and send a toxic cocktail of radioactive fallout into the atmosphere in the world's worst civilian nuclear incident. More than thirty years later, the New Safe Confinement sarcophagus has been constructed and slid into place over the old reactor, an event being marked today by a ceremony including Ukraine's president. (Photo by Brendan Hoffman/Getty Images) (Getty Images)
-- A charter plane carrying the first-division Brazilian football team, Chapecoense Real crashed in the Mountains of Colombia late Monday, killing as many as 76 people. Among the dead were 21 journalists traveling with the team to the final match of the South American Cup tournament against Atléticao in Colombia’s second city, Medellín. There were 6 survivors, including 3 players, 2 members of the crew and 1 journalist. Associação Chapecoense de Futebol, as the team is formally known, returned to the first division of Brazilian football in 2014 and was holding its own against fabled global clubs like Corinthians and Santos in league play. The team was on its way to the biggest game in the club’s history. The cause of the crash has not been confirmed.

London, England   Daniel Lee Olivas/Getty
An employee poses next to an art piece entitled 'Monogram 1955-59' at the Tate Modern in London Q: What do a goat head, a tire, and rainbow splatter paint have in common?

A: Together, they constitute an art exhibition.

My first, confused exposure to modern art was Marcel Duchamp's Fountain, the famous urinal turned readymade sculpture. Later, on a trip to the MoMA in New York City, I realized that modern art comes in all shapes and sizes, from a Kikkoman soy sauce dispenser to van Gogh's Starry Night. On the same trip, a friend and I decided to experiment by dropping a used tissue on the floor of the museum to see if people would walk around it and observe it as a legitimate work (they did).

The paint splattered face of a goat that appears to be emerging from a tire is a Robert Raucschenberg piece entitled "Monogram 1955-59." It will soon be on display at the Tate Modern in London, where many, like the woman pictured, will knit their brows wondering what exactly it means. The caption provided with this photo refers to the art merely as "graffiti," while completely ignoring what is actually depicted. I've taken it upon myself to correct this grave error. The art shows two beautiful brown bears, a mama and baby. Chernobyl was a devastating event, and these fake bears are probably the closest thing to real life this area will see for a long time. Still, it's somewhat sweet.

Havana, Cuba    Dario Lopez-Mills/AP
A man walks his daughter to school past a mural of the late Fidel Castro Over the weekend many reflected on the late Fidel Castro's legacy and projected how Cuba will relate to the United States in the future. But in Havana life goes on. A father takes his daughter to school on Monday. And an impromptu mural hints that the singular communist leader will not easily be forgotten, brandishing what Castro once said in Spanish: "Fight against the impossible and overcome."