Stand down, #NeverRomney conservatives: Trump's pick isn't a betrayal — and you might thank him in 2020 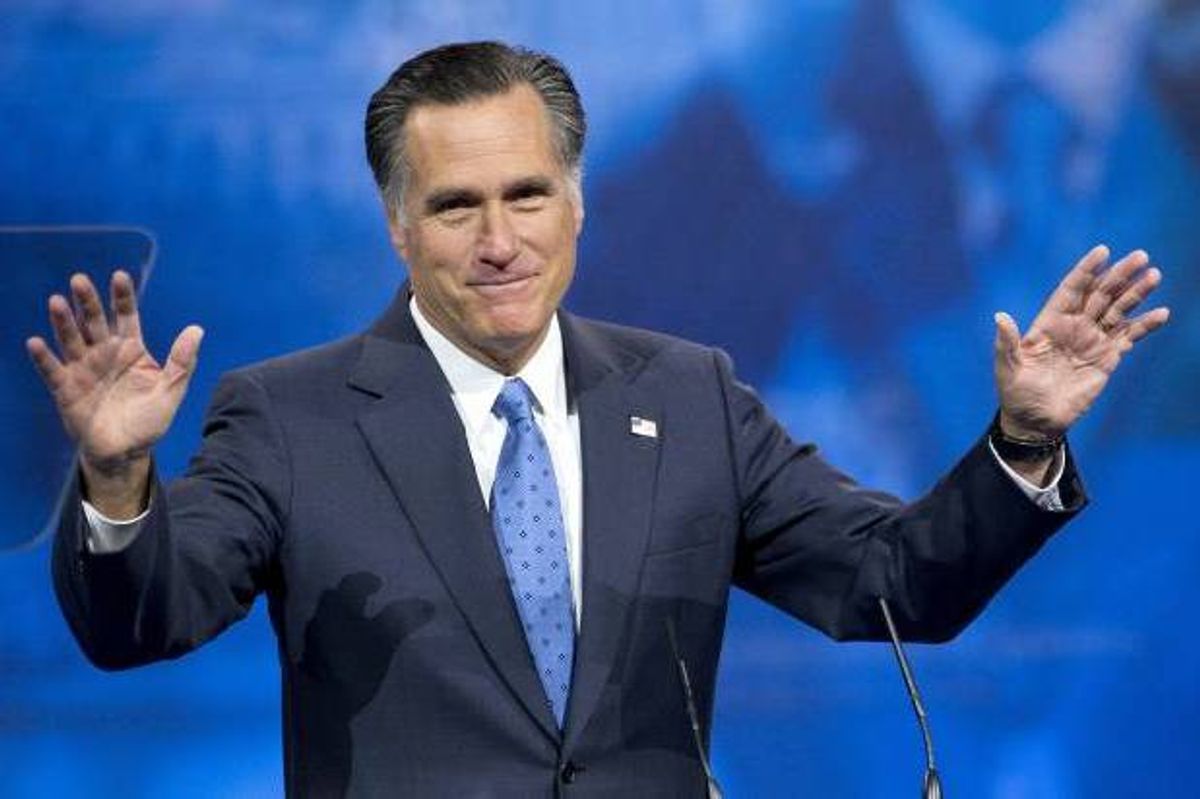 President-elect Donald Trump’s reported courtship of Mitt Romney for secretary of state signals a pivot to the normal, a move that should make millions of Americans sigh with relief. Even liberal TV host Bill Maher has openly pined for Romney in the age of Trump, disturbed by grandiose and pernicious campaign trail language from the blue-collar billionaire.

By picking Romney, an able businessman who saved the 2002 Olympics from the brink of bankruptcy, the Trump transition team is moving as one led by a shrewd businessman should: pragmatic and efficient and willing to move past grudges held on the campaign trail. President Barack Obama noted this when speaking to the press about the transition process, saying that he believed Trump would be driven by pragmatism, not ideology, as he governs — even as Obama expressed concerns that Trump’s temperament could be problematic.

If Romney jumps on board, Trump’s administration may marry establishment Republicans with "the Make America Great Again" faction of Trump’s base. A Romney in Trump’s Cabinet would satiate traditional conservatives, just as his pick of Mike Pence for running mate did months ago. In many ways, Pence, who served 12 years as a U.S. congressman before winning the Indiana governorship, is also a consummate establishment figure. While perhaps more conservative than the average GOP congressman or -woman, Pence also embodies the traditional backbone of grassroots conservatism, getting high marks on the American Conservative Union scorecard, for example, yet also serving as a smooth D.C. operator who knows how legislative sausage is made.

For as much as Donald Trump’s grassroots supporters rightfully lampoon millennials, as the “Snowflake Generation,” for their embrace of intellectually weak and irrational “safe spaces,” it appears that Trump supporters' knee-jerk opposition to Romney may make them guilty of the same hypersensitivity. During the bruising presidential campaign, Romney spoke his mind, and like South Carolina Gov. Nikki Haley, wasn’t afraid to challenge Trump.

It speaks highly of Trump’s leadership that he’s willing to name Haley as U.N. Ambassador given her past, sharp criticism of Trump. Haley is a solid choice on many levels. Bringing Romney aboard his administration would be another signal that campaign trail fights won't necessarily set the agenda of Trump's presidency.

Romney was elected as an executive in a deeply blue state and would mollify the National Review wing of the conservative movement iced out from the Trump train tracks. By naming smart, thoughtful public servants like Romney, Trump could put states like Nevada, Virginia and New Hampshire into play, along with traditionally blue states like Illinois and Maryland that might be open to voting Republican in 2020, especially since they recently elected Republican governors.

By publicly undermining the Romney pick, Trump campaign manager Kellyanne Conway, an otherwise brilliant campaign strategist and communicator, risks putting cronyism ahead of qualifications. Fortunately, Trump appears to be maintaining his independent vantage point, though in some respects the “palace intrigue” resembles a made-for-TV drama.

The Romney schism appears largely driven on personal loyalty grounds, and scuttling a Romney pick would violate the conservative mantra by appointing some other less-qualified secretary of state (or in the case of possible rival nominee David Petraeus, one who has compromised national security under similar circumstances as Hillary Clinton) simply because of obsequiousness. Conservatives aren’t suppose to dole out jobs based on gender, race or nepotism. They shouldn’t start now.

Fluent in French and an experienced multinational businessman, Romney astutely foresaw in 2012 the geopolitical threat posed by Russian President Vladimir Putin (despite mocking from President Obama). Romney would be the perfect complement to Trump, whose coquettishness in a bromance with Putin has raised red flags among those worried about Trump’s singular rise. Romney would also be a levelheaded patrician presence, providing a much-needed cooler hand that wouldn’t fight for Trump’s spotlight.

While electoral war wounds understandably bolster the idea that Trump would betray his supporters by potentially tapping Romney, the #NeverRomney crowd would be wise to recognize that if Trump hopes to expand a 2020 electoral victory beyond his current 30 states — the way former president Ronald Reagan expanded his lead from 44 states in 1980 to 49 states in 1984 — he needs to be expansive leader rather than simply surrounding himself with people who fall in line.

While it’s true that Trump’s clean victory in the Electoral College system, along with holding Congress, gives him a launch pad for his agenda, it’s also true that by losing the popular vote, Trump is operating on weaker populist mandate than he claims. He won in part because Americans want a change, and they want a government that works. Romney, who spent his life turning around large institutions, has the perfect skill set needed to successfully represent American interests abroad.