The "War on Drugs" is rigged: Now that the face of addiction is white, will anything change?

To poor black communities, the heroin epidemic is nothing new — and only the 1 percent have been winning this war 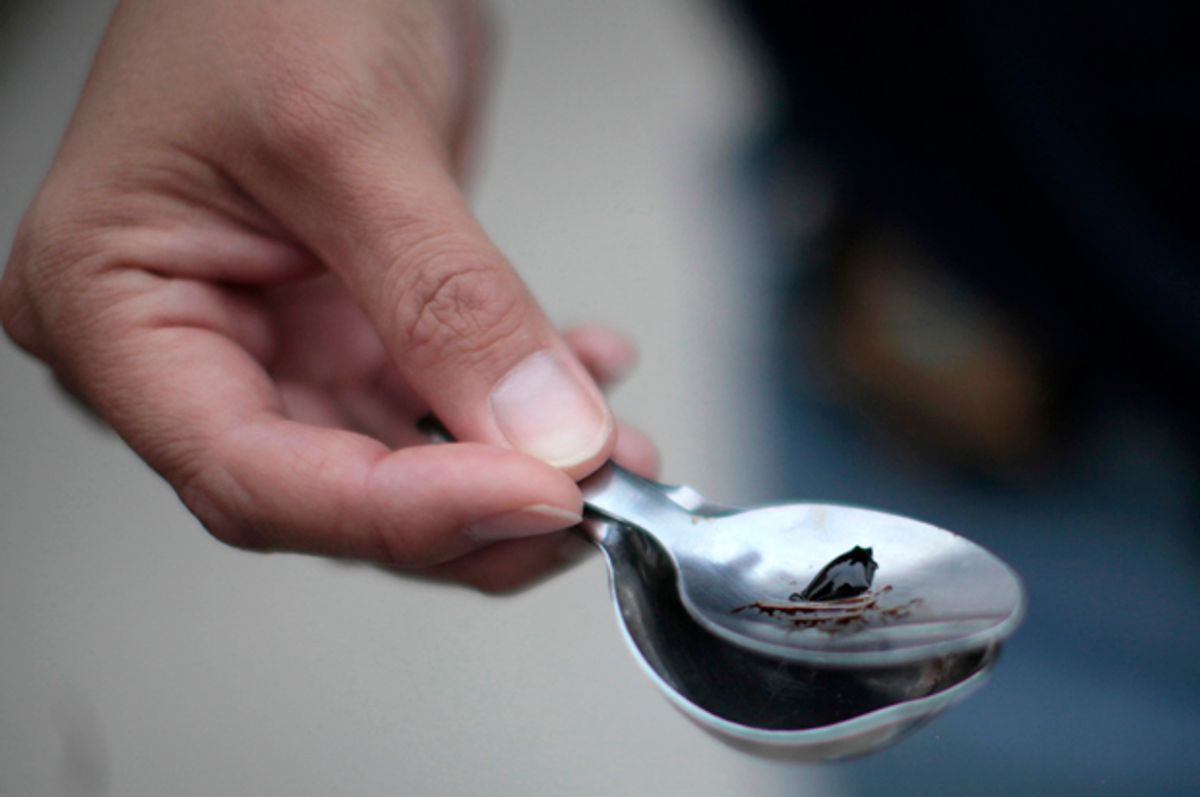 The "War on Drugs" is bullshit; it’s just another way for the top 1 percent to benefit off the pain that accompanies poverty. A bullet wound, a life sentence or an overdose for us is a paycheck for them. But alas, there’s hope­­: The new wave of white-suburban Rice-Krispies-treat-after-school soccer-program drug addicts may bring the change we all need.

I teach an English class at the University of Baltimore. We cover a range of topics dealing with culture and the way it’s documented. Somehow drugs came up in class. “There’s an awful heroin epidemic sweeping across our country,” a small white woman wearing big frames said, bursting into tears. “Our kids are quickly becoming addicted and dying!” She removed her glasses to wipe her face, before saying how she never thought her suburb would mirror a drug-infested city.

“Maybe it’s new to you,” I replied. “But if you’re black and poor, the heroin epidemic has been around.”

I showed them the '90s by telling them about Yellow Face Kerry with the short cornrows and how he liked to carry the same things to the park every time: a lighter, a tablespoon, a hypodermic needle, a belt that doubled as a tourniquet and a sack of dope when he could swing it.

Kerry would strangle his calf with his belt until a few veins blushed and popped, then he’d flick, flick , flick the lighter until a sturdy flame hung under his tablespoon. His eyes would flare as the fire made the spoon glow orange and the liquid contents inside bubbled enough until it reached a temperature that only he could eyeball. Then he’d dab the tip of his needle into the heated solution until it filled the syringe. The next stop was in that rose-bruised calf vein where he sank the needle and pushed until a little of his own blood flushed in. One more push returned that glob of dope-mixed blood back into his system as he loosened the belt and slipped into an easy nod.

He’d float away to wherever dope fiends float to, as the rest of us preteens would play basketball next to the bench he leaned on. Kerry didn’t scare us because his presence was normal: Junkies, dope fiends, sales, shooters, baseheads or whatever your region calls them were normal.

I’ve been a professional writer for two years now and away from the drug game for more than a decade. It feels like eons since I parked European cars smack dab in the middle of poverty, jumped out like a pop star with pop-star clothes on and received all the praise from the other dealers, the ladies, the fiends and basically everybody but the cops.

Today I walk those same blocks as an advocate­­, a person who pulls kids away from the drug game — not by demonizing their actions, but by exposing them to other options that kids like us don’t normally get and telling the truth about selling drugs­: how the money doesn’t match the risk and how it’s a vicious trap that has captured them, me and the dudes that came before us. Again, this isn’t new; it has been like that for decades.

Back in the '70s, Nixon’s drug war planted the seeds that then were fertilized by Reagan and Bush in '80s and that grew into the field of mass incarceration harvested and cosigned by Bill Clinton in the '90s. John Ehrlichman, Nixon’s domestic policy chief, told Harper’s magazine that Nixon’s "War on Drugs" was meant to target black people.

“We knew we couldn’t make it illegal to be either against the war or black, but by getting the public to associate blacks with heroin, and then criminalizing both heavily, we could disrupt those communities. We could arrest their leaders, raid their homes, break up their meetings, and vilify them night after night on the evening news,” explained Ehrlichman. “Did we know we were lying about the drugs? Of course we did.”

Their plan worked. America watched the number of African-Americans being incarcerated soar past that of whites and then blacks were released into society only as partial citizens. Drug polices can easily make you unemployable, leave you ineligible for financial aid for higher education and ineligible for public housing or welfare. You are basically like a slave — a captured human with partial rights. What do you do for money? How do you assimilate? This is America, and everything has a cost. Having nothing drives a person crazy and pushes them towards two realities  —  one of a user or that of a dealer.

I use art to explain these things, and admittedly at times it’s difficult. The drug game has changed. I’m a dinosaur, a house phone, a walking tombstone­­. Friends mentioned in my first book “The Cook Up,” some of the guys who even made it to the book launch, are now dead and gone: RIP to Cheese and Pretty Boy Kory. There’s a shortage of us 30-somethings who barely crawled out of the '90s, leaving me to be one of the few cats from that era with positive insight.

And trying to define those harsh times to these new dealers with their dyed dreads, painted-on jeans and drug habits worse than the junkies they serve is tougher than an MIT algorithm. I don’t understand their language, their moves, the selfies they take with their weapons or even the point of them slangin’ with the money being even less now than when I was active.

But when the young bulls do listen I explain that in Baltimore, 97 percent of the people born into poverty die in poverty, and I understand that heroin dealer is one of the few jobs that's always hiring. It’s been like that in our inner cities and will continue to be like that until those unfair drug policies are changed. The government and big business profits off of those same policies, so they aren’t excited to change anything — which means it’s up to us. We are responsible for getting guys like Yellow Face Kerry the help he needs and kicking the drugs out of our communities.

What my student didn’t know is that white addiction is not a new wave. Many articles have been published on the rampant drug use in white communities and how it surpasses that of African-American communities, even though the media and stereotypes would lead you to believe the opposite. The wild card is held by these opioid-slinging pharmaceutical companies that couldn’t wait to have doctors prescribe the drug for anything from a slightly scratched pinky to a bad day. I fully understand that addiction because they had me, too; luckily, those pills weren’t half as easy to get in the early 2000s as they are now.

When so many people in white communities went Percocet crazy that doctors were finally being called out for their role in creating the epidemic and forced to lessen the large amounts that they were shelling out, it was too late. Percocet is like synthetic heroin, so if the doctor cancels your prescription, you can get the same feeling from the street pharmacist, and that’s exactly what the white kids are doing. As a result, treatment centers are popping up everywhere, I hope this leads to us effectively addressing this issue.

I well up with depression when I think about Yellow Face Kerry and his battle with addiction. White people and those in more privileged areas are starting to feel the same way. And even though I’d never wish that pain on anybody, I’m glad this problem is finally getting the attention it needs. I hope books like “The Cook Up,” along with artists like Jay Z continuing to speak out and raise awareness, helps bring about change. But the first step is acknowledging that the "War on Drugs" is bullshit, and only the top 1 percent are supposed to win.