Childish Gambino's “Awaken My Love”: What happens when a rapper releases an album containing no rap at all 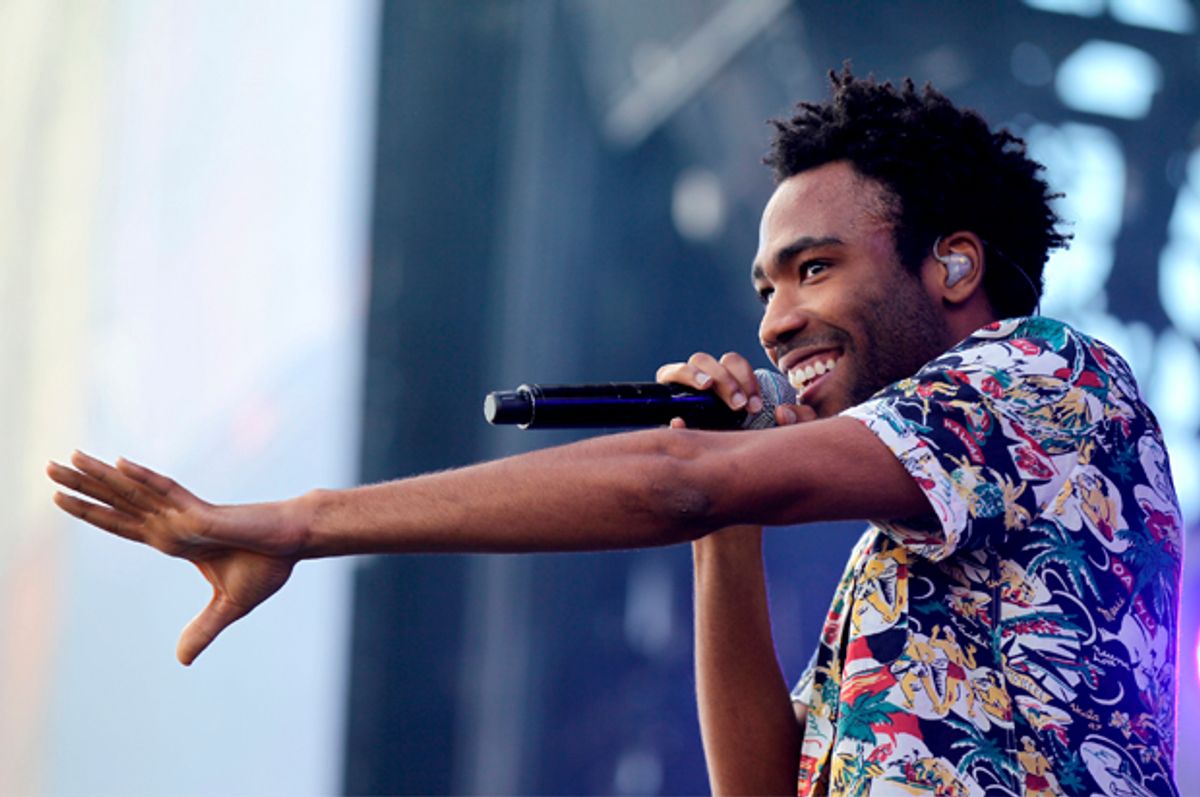 This year the lines between category have continued to blur, particularly when it comes to the role of rock sounds in popular music. The year’s best rock music (Car Seat Headrest, Mitski, Teen Suicide) has again been relegated to “indie” and “alt” status, but rock’s staples, in the music’s attitude and instruments, have become pronounced in much of the year’s best hip-hop and R&B — if you can still call it that.

Take for instance this week’s biggest release, The Weeknd’s “Starboy.” It is, like previous Weeknd records, nocturnal, pulsating R&B. The Weeknd’s voice animates an alluring underworld lurking in the shadows of a refurbished 1980s metropolis. Familiar Weeknd themes, such as sexual dominance and drug use, are reintroduced. But sonically the album takes more cues from '80s rock music. “There are new inspirations on this album,” The Weeknd told Zane Lowe in a recent Beats 1 interview. “The production feels aggressive but still sexy. The Smiths, Bad Brains, Talking Heads, Prince, and DeBarge play roles. . . . It’s hard to label the sound because, when I first came out, nobody would label it R&B. I just want to keep pushing the envelope without it feeling forced.”

The songs that listeners would have been most hesitant to label R&B when The Weeknd began releasing music in 2010 come halfway through the record. Lana Del Ray sings hauntingly on “Stargirl Interlude,” a song powered by a slow, heavy bass and drum kit pulse that vaguely recalls Can’s “Vitamin C.” And that song gives way to “Sidewalks,” which in structure and instrumentation (a fluttering electric guitar in the fore, bass and percussion providing tempo) is a traditional rock song. But the Weeknd sing-raps in the style of Drake and Kendrick Lamar also raps. This is one of the moments on the album where things get aggressive, delightfully so.

There’s a lot happening within this sequence, but it manages not to feel forced. Maybe that’s because of The Weeknd’s vocal versatility — not to be mistaken for vast range. Or maybe it is because such hybridization has become standard in pop. This is not, after all, the first time that Kendrick has rapped on a rock song made by a rock outsider.

Elsewhere, one of the last Goliath, guitar-wielding capital “R” rock stars, Jack White — Who that comes after him in rock’s lineage can fill a stadium? — has played a critical role on two of the year’s best albums, Tribe Called Quest’s “We Got It From Here. . . Thank You 4 Your Service” and Beyoncé’s “Lemonade.”

White’s collaboration with Tribe came about last year, when White, a Tribe fan who is conscious of rock’s debt to the blues, asked Q-Tip for permission to play one of their old hits, “Excursions,” in a live show. Q-Tip’s appreciation of White was mutual; he agreed and joined White in his Madison Square Garden stop.

The joint performance was loud, rollicking, full of testosterone and swagger — reminiscent of Run DMC’s 1986 remake of Aerosmith’s “Walk This Way.” White’s guitar brings some of that same energy to the three songs he had a hand in on “We Got It From Here. . . ” In particular, he sets the mood on “Ego” with a foreboding bump-a-bump beat; and midway through the song he uses his guitar solo like a defibrillator, delivering an electric jolt.

Though White plays a different string instrument, the bass, on Beyoncé’s “Lemonade,” the effect is similar, if not more pronounced. He joins her on the album’s third song, “Don’t Hurt Yourself,” deploys a titanic Led Zeppelin-sampled drum beat (which is itself taken from a Memphis Minnie song) and sets the stage for Beyoncé to, you know, wreck shit. Her singing is frayed, simultaneously furious and prideful: “I am the dragon breathing fire/ Beautiful mane, I'm the lion/ Beautiful man, I know you're lying/ I am not broken, I'm not crying, I'm not crying,” she sings. And on the hook, “When you hurt me, you hurt yourself/ Don't hurt yourself.”

“Don’t Hurt Yourself” is Beyoncé at her most defiant. The song is intensely personal — a response to her husband’s infidelity — but there’s also more than a whiff of the political. It's a female empowerment anthem, one piece of a bigger, beautiful black female empowerment album — and, simply, a fantastic work of art. Beyoncé, like The Weeknd and Tribe, reclaimed rock chords, pumped them with fresh swagger and built an exclamatory moment within her album.

It's not a new feat, the fusion of rock and hip-hop, rock and R&B. But presently the comingling of these different genres sounds less clunky and more pointed than in past incarnations (just listen to past tries by Lil Wayne, Kid Cudi, or Linkin Park and Jay Z). These rock samples have emotional context and purpose: They beam with confrontation, pride, and, sometimes, a sense of the dark unknown.

Speaking of which, on Friday, Donald Glover, who raps under the name Childish Gambino, will release “Awaken My Love,” an album which does not seem to include any rapping. Instead, Jonah Weiner, who heard an early slice of the album at Glover’s Pharos festival, said Gambino “leaves rap behind for trippy funk rock indebted to ’70s visionaries like Funkadelic and Sly & The Family Stone.” In one of the album’s two pre-released singles, “Me and Your Momma,” Gambino wails over heavy bass riffs.  It’s a beautiful, murky song and a new direction for an artist whose past records have been composed mostly of clever, word-dense rap. While it may be indebted to funk, it’s not funky. It’s something more unknown.