Obamacare's would-be destroyer: Donald Trump's pick for health secretary has long been gunning for the ACA 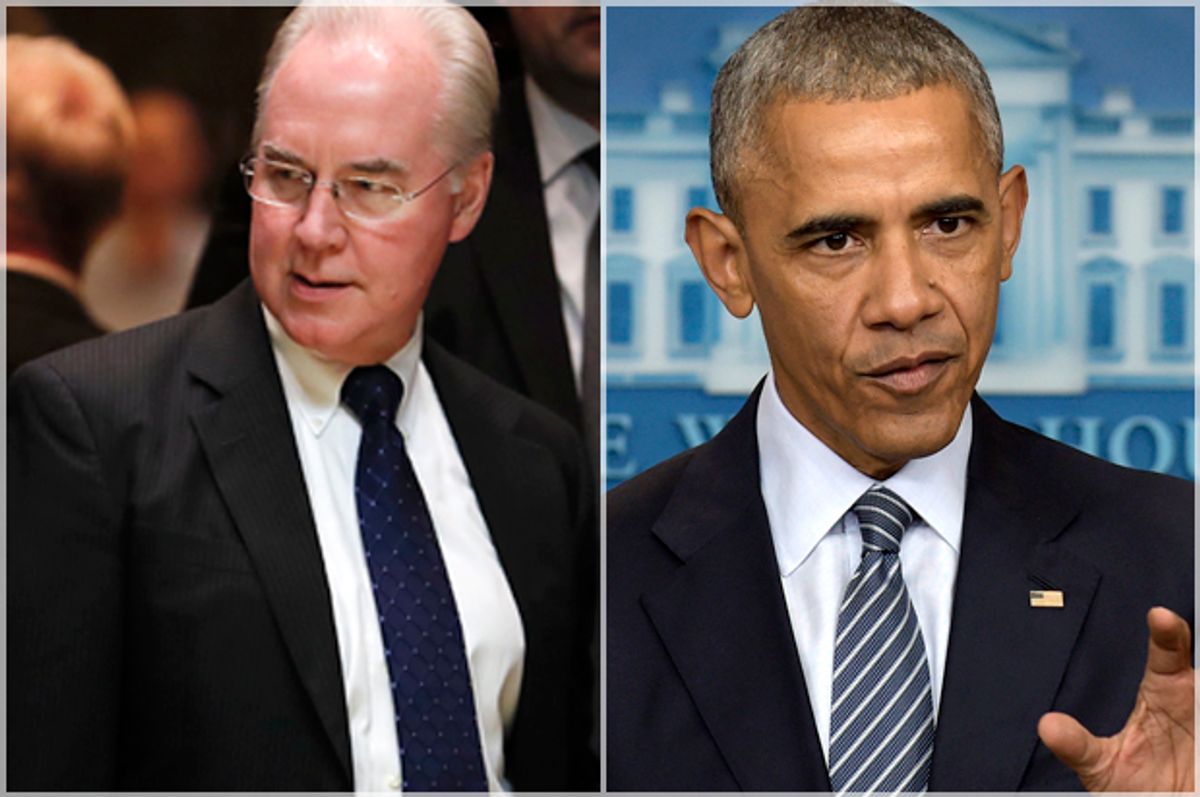 Unless Senate Democrats make a huge stink about him in the confirmation hearings, and unless they filibuster the confirmation vote, it appears that Rep. Tom Price, R-Georgia, will be Donald Trump’s secretary of Health and Human Services.

You might not immediately recognize the name, but you’re probably aware of his signature legislation. Price is responsible for the first bill aimed at repealing the Affordable Care Act, and versions of that repeal legislation have been reintroduced every year since the ACA was passed. Price is also a vocal supporter of House Speaker Paul Ryan’s plot to privatize Medicare — a profoundly foolish idea that would bankrupt seniors and balloon the cost of health care.

On top of all that, Price is anti-choice on abortion and has introduced a bill to defund Planned Parenthood, while enjoying a 100 score from the National Right to Life Center. And he supports allowing employers to legally discriminate against LGBT citizens.

So now we know the name of the man who, if confirmed, would be in charge of dismantling the ACA and possibly Medicare, thereby stripping more than 20 million Americans, including me, of our health care. As if that weren't bad enough, Trump, Price and Ryan will move forward with their plan to dump elderly Americans into the private insurance market, forcing rates through the roof, with tax credit vouchers that barely cover the colossal premiums. In a word, it's a hell-scape.

First on the chopping block, however, will be the congressional “exemption” from Obamacare, involving the most deceptive claim about the ACA made by Republicans across the board. Let me cut to the chase: If you’re a congressional staffer who receives insurance through your job, you’re about to be totally screwed by the new administration and its incoming secretary of health and human services. It’s almost certain that Trump, with Price’s support, will rescind President Obama’s rule that continues the government's policy of covering 75 percent of the monthly premium rates for members of Congress and their staff.

Let’s rewind to 2009 when the ACA was being hotly debated in Congress. In an effort to flimflam the Democrats, Republican Sen. Chuck Grassley proposed an amendment that would force members of Congress and congressional staffers to abandon the existing Federal Employees Health Benefit Plan and instead sign up for an ACA policy via the health insurance marketplaces (often called the "exchanges") just like ordinary Americans. The point was to illustrate the allegedly shoddy and undesirable nature of the ACA and to compel Democrats to balk at the notion, thus undermining their pitch for how great the law would be.

But the Democrats called Grassley’s bluff and accepted the amendment. So members of Congress and staffers who want employer-based health coverage must acquire health insurance through the marketplaces. Here’s the problem: Like most employers, public or private, the government has always paid about 75 percent of the cost of the monthly premiums for its employees as a fairly typical salary benefit. But when members of Congress and their aides were bumped over to the exchanges, they would have lost that benefit, which would have amounted to a significant pay cut — one especially brutal for low-wage staffers.

During the summer of 2013, the Office of Personnel Management corrected the problem by creating a rule that let the government continue covering 75 percent of the new Obamacare marketplace insurance premiums. As an employer, the government naturally has the prerogative to do this, just as  Trader Joe’s or Walmart could offer the same benefit.

But Republicans twisted and bastardized the Office of Personnel Management's rule into what they called “an exemption from Obamacare” for Congress. This was insane, especially because none of this would ever have been an issue if a certain Republican senator, namely Chuck Grassley, hadn't monkeyed around with the healthcare reform law in the first place. In a strange way, it’s good he did so. Because now, in addition to giving congressional workers some options, this new arrangement ultimately reduced the cost of insurance for the federal government. Premiums under the ACA are lower than they would be otherwise, thus making the government’s 75 percent contribution lower, too.

Now here's the rest of the story: It turns out that former House speaker John Boehner worked extensively with outgoing Senate minority leader Harry Reid and other leaders from both parties to re-establish the government premium subsidy for Capitol Hill workers and members. In fact, according to Politico, Boehner and Reid scheduled a secret meeting at the White House to convince President Obama to re-establish the premium coverage. In the meantime, draft legislation was circulated to repeal the marketplace requirement for Congress, but it never advanced beyond the planning stages.

Eventually, congressional pressure convinced the personnel office to authorize the rule — the so-called exemption from Obamacare. The duplicity and dishonesty by the marketers of this lie, especially Boehner, was astonishing. There is no congressional Obamacare “exemption," and there never was. Congressional employees have to buy insurance via Obamacare — by law. And the rule that Boehner tried to contort into an “exemption” was a rule he personally lobbied for, in cooperation with his nemesis in the Senate. Making matters worse, House Republicans ended up suing the White House over the implementation of this rule.

And the alleged exemption will likely be killed someday soon by the Trump-Price-Ryan regime. All it will require is Trump’s unilateral executive order. Once it's gone, debate will commence over the repeal of the rest of the law. No one yet knows what rules Price might eliminate or change if he, one of Obamacare's most committed opponents, is in charge of the national Healthcare.gov exchange, through which 9.6 million Americans get their insurance.

With 51 votes in the Senate, Republicans can repeal the Health Care and Education Reconciliation Act of 2010. Removing that prong of Obamacare would eliminate the mandate, the Medicaid expansion, the incremental closure of the Medicare Part D “donut hole” and, of course, the subsidies. Unless the health insurance lobby steps in to block the escalating mayhem this would spark, the rest of the ACA would fall apart, chiefly because without the mandate and the subsidies, millions of customers will be jettisoned into medical limbo.

All of this will begins on Jan. 20. Oh, and millions of Americans who voted for Donald Trump will unquestionably be caught in the undertow — one they helped make possible.