The swamp gets a bit murkier, adding a Goldman Sachs alum who was his top fundraiser 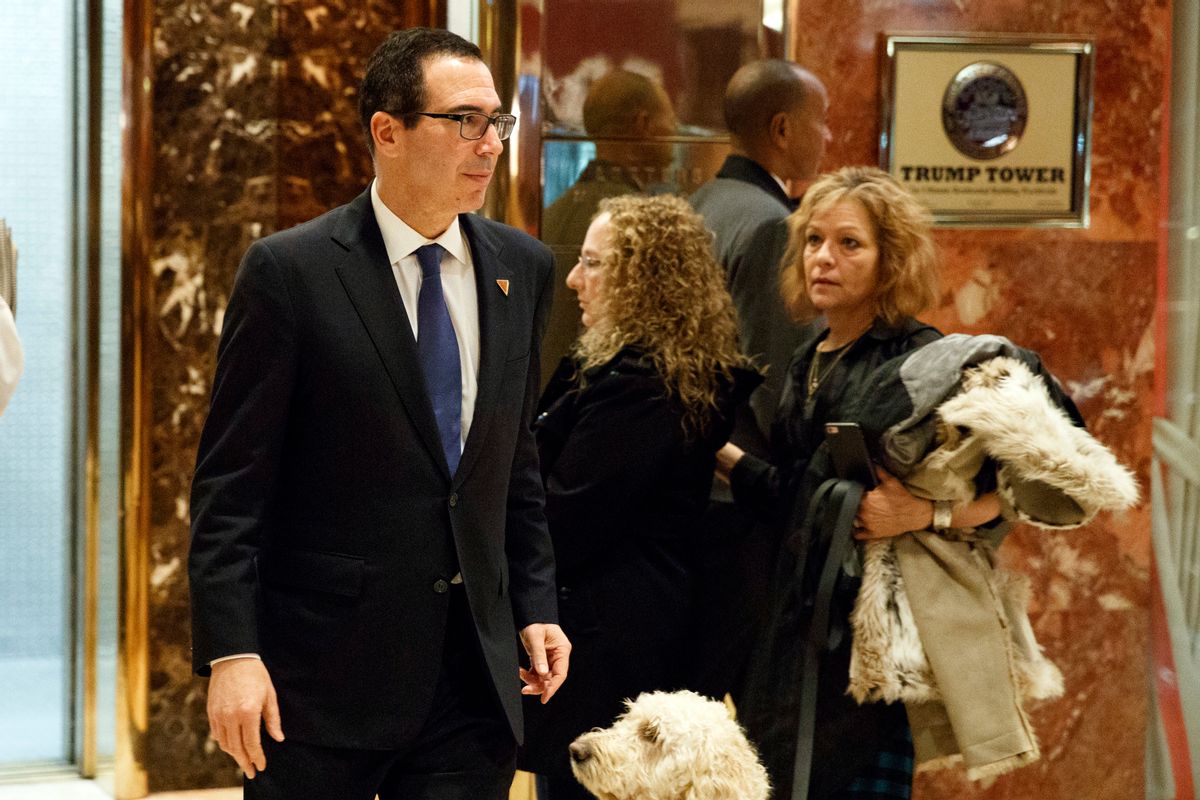 Steven Mnuchin, President-elect Donald Trump's expected choice to be the nation's 77th treasury secretary, has had a long history as a successful financial executive and a shorter but significant period in a job that ushered him into Trump's inner circle: head of Trump's campaign finance operation.

When Mnuchin, 53, was chosen by Trump as his national finance director in May, he told The Associated Press that the two men had been friends for 15 years. Through his work as finance chairman, Mnuchin (pronounced meh'NEW'-chen) is close to Trump's children and son-in-law, Jared Kushner — a top adviser to Trump — and worked with them on fundraising events.

The campaign raised at least $169 million, in addition to the $66 million that Trump spent out of his own pocket. Though that was far short of what Hillary Clinton raised, it represented an impressive haul given that Trump didn't begin fundraising in earnest until the end of May.

A person familiar with Trump's decision said Tuesday that the president-elect will nominate Mnuchin to the Treasury position. The person would only discuss the nomination on condition of anonymity because the person was not authorized to reveal it ahead of the official announcement.

If approved by the Senate, Mnuchin would follow in the tradition of two previous treasury secretaries — Robert Rubin in the Clinton administration and Henry Paulson in George W. Bush's. All had vast Wall Street experience gained from years spent working at powerhouse Goldman Sachs.

Yet unlike Rubin and Paulson and unlike President Barack Obama's two treasury secretaries, Timothy Geithner and Jacob Lew, Mnuchin would bring no government experience to Treasury, something that could prove a hurdle in navigating the tricky politics of Washington.

The younger Mnuchin amassed his own fortune at the firm and then left in 2002. He worked briefly for Soros Fund Management, a hedge fund led by George Soros, before starting his own investment firm, Dune Capital Management.

As head of this firm, Mnuchin and other investors participated in the purchase of failed mortgage lender IndyMac in 2009 and renamed it OneWest. The failure of IndyMac in 2008 with $32 billion in assets was one of the biggest casualties of the housing bust.

Mnuchin became chairman of OneWest, which was sold to CIT Group in 2015. Before the sale, OneWest faced a string of lawsuits over its home foreclosure practices.

This month, housing advocates filed a complaint asking the Department of Housing and Urban Development to investigate OneWest for possible violations of the Fair Housing Act. The lender failed to place branches in minority communities, provided few mortgages to black homebuyers and preserved foreclosed properties in white neighborhoods while allowing similar homes in minority communities to fall into disrepair, according to the California Reinvestment Coalition and Fair Housing Advocates of Northern California.

CIT declined to respond directly to the complaint but stressed in a statement that it is "committed to fair lending and works hard to meet the credit needs of all communities and neighborhoods we serve."

Mnuchin also became a major investor in Hollywood, helping finance a number of movies, including the 2009 blockbuster "Avatar."

As treasury secretary, Mnuchin would be the administration's chief economic spokesman, serving as a liaison not only to Wall Street but also to global investors, a critical role given the trillions of dollars in treasury bonds owned by foreigners. In addition, it would be his job to sell the new administration's economic program to Congress.

Mnuchin will also oversee a sprawling bureaucracy that includes the Internal Revenue Service and the agency that issues millions of Social Security and other benefit checks each month. Treasury also runs the agency that wages the financial war on terrorism.

Even before his nomination was announced, he was being attacked for his ties to Wall Street.

"It's difficult to think of a nominee who better embodies the culture of Wall Street greed than the former Goldman Sachs partner," the Communications Workers of America, a labor union, said in a statement. "Naming Mnuchin as treasury secretary would be a slap in the face of millions of working families who will be victimized by this Wall Street-rigged economy."

During the campaign, Trump complained about the Dodd-Frank Act, passed in 2010 in response to the 2008 financial crisis and intended to prevent another crisis by tightening financial regulations. He called the increased regulations on banks a "disaster."

Mnuchin, in an interview with CNBC in July, said he thought Dodd-Frank "needs to be looked at." But he has not spelled out what changes he would like to see. Yet if Trump decides to back Republican attempts to rewrite the law, Mnuchin could be expected to lead the administration's effort.

Analysts said Mnuchin's years of experience on Wall Street and in managing an investment firm gave him real-world skills that likely appealed to Trump, a business executive who also has never served in government.

Sohn and other economists, however, suggested that Mnuchin's lack of government experience could prove to be a drawback in selling the administration's economic policies to Congress.

"People who come from Wall Street quickly find that they can't just make a decision and have it happen," said Stanley Collender, a longtime staffer on House and Senate budget committees and now an executive vice president at Qorvis communications. "It's not like being a CEO. There is a lot more compromise involved."