Shepard Fairey on street art: "It has the ability to reach people who are not a captive audience"

The artist talks about a new book about a New York street-art event, Obama and fighting corporate control 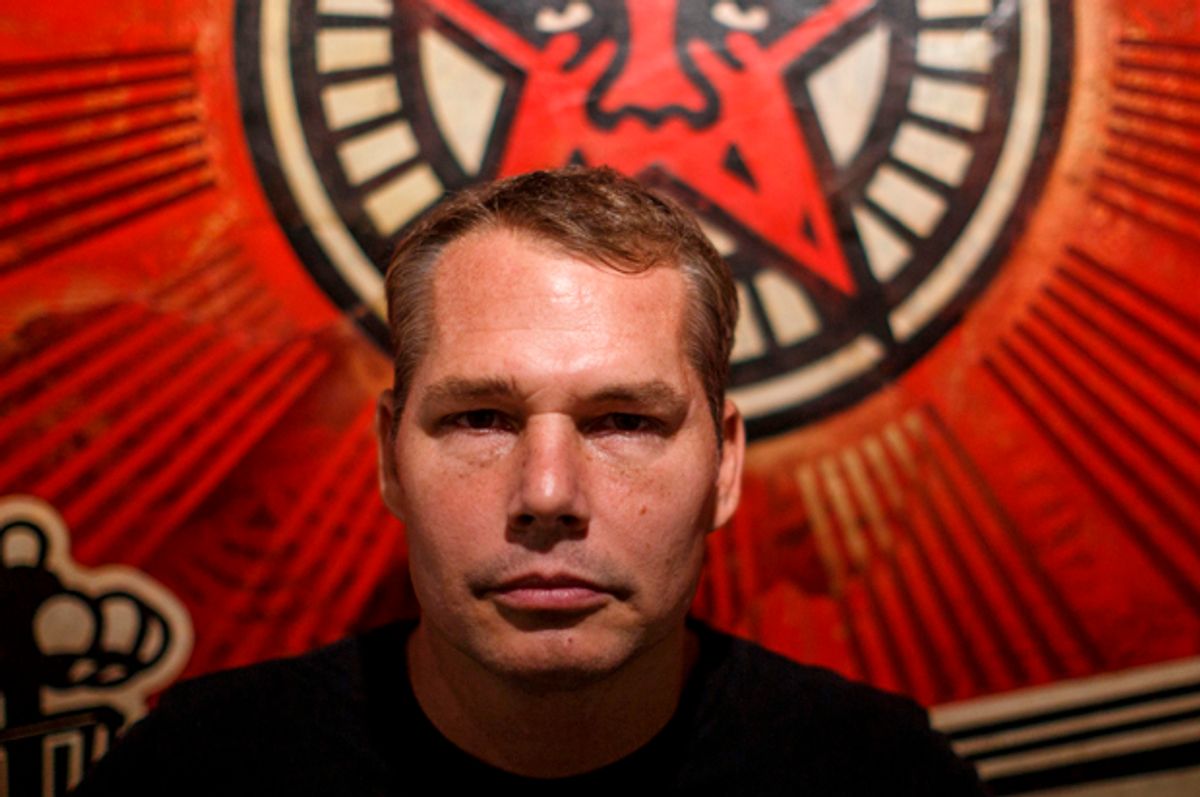 Shepard Fairey was once a young underground street-artist familiar only to fans of graffiti art and California’s lowbrow movement. In recent years, though, he’s become an internationally known figure who did much exposed posters supporting Barack Obama’s 2008 run for the presidency: His work can be seen not only on telephone poles and the sides of buildings but in the Smithsonian, The Museum of Modern Art and the Los Angeles County Museum of Art.

Fairey is one of a handful of street artists represented in a new art book called “Eleven Spring,” which captures an important street art show in Lower Manhattan organized by the Wooster Collective website. The show, which took place on just three days in December 2006, drew artists including The London Police and Lady Pink, who sprayed or painted work before a building near New York’s Bowery district was turned into condos. Besides contributing work to the exhibit, Fairey also writes one of the book’s introductions.

Salon corresponded by email with Fairey while he was traveling between Los Angeles, where he is based, and Hong Kong, where he was working on a project. The interview has been lightly edited for clarity.

Tell us a little about this show on Spring Street — what was the idea behind it and why was the art there worth capturing in a book like this one?

Eleven Spring was a constantly changing surface for unsanctioned street art for years, so the opportunity to allow street artists to cover the walls inside made sense because of its exterior authenticity and history. The art was worth capturing because Wooster Collective curated a group of the most influential and talented artists from the movement.

Wooster had been showcasing many of these artists on their site and were extremely familiar with street art culture. Street artists are competitive by nature so bringing the group together meant that everyone wanted to do strong work to rise to the top of the field.

Street art, in general, has come a long way since you started doing it as a college student around 1990 — the cult of Banksy, gallery shows like Eleven Spring, the Museum of Contemporary Art “Art in the Streets” exhibit in 2011, your own fame around the Obama posters. Does street art seem as exciting and full of possibility as it once was, or does it risk becoming blunted from popularity and exposure, like punk rock or something?

I’m still excited about street art because it has the ability to reach people who are not a captive audience. If you are going to an artist’s gallery or museum show or website, you might find something interesting and new, but it’s not the same as the visceral experience of encountering something unexpected on the street.

I still enjoy putting work up on the street because I know there’s the possibility of connecting with someone that is not already a fan of the genre for my art in particular. All cultural movements have the potential for bandwagon jumpers and oversaturation, but in my opinion, good work always breaks through even when someone thinks they’re a jaded hipster.

You’ve expressed some disappointment with the Obama presidency. With him close to leaving office, have you reconsidered at all? How does he stand up in general?

I’ve been very happy with Obama’s communication and forward movement on issues like climate change, protection of Planned Parenthood, gun safety, and marriage equality for the last two years. I think Obama is a very very high-quality human being who has the right concerns but was met with a lot of obstacles. I think the long view of his presidency will be very favorable.

Have you followed the current political race closely, or has it just been too harsh and ugly to handle? Have you done any public art about it?

I have followed it very closely. I made some art for Bernie Sanders and some art against Trump includ[ing] poster kits that were distributed to swing states. Unfortunately, Trump was still elected. We’ve done some public work around Make America Smart Again.

You’ve been through some rough stuff over the last few years — copyright suits over appropriation, charges of vandalism. Do the existing laws, and the way they are enforced and interpreted, limit what artists in the public sphere can do? How would you like to see things change?

A lot of the laws have broad latitude for interpretation which means that a corporation with an ax to grind or a police department with an ax to grind can make my life or any other artist’s life difficult if they choose to. I respect copyright, but I don’t always agree with the corporate interpretations of copyright law. Obviously, I think the police would be using their time better worrying about things other than public art, but regardless of my feelings about those specific issues, having and expressing an opinion always has its risks.

Street art is associated with a few big cities — New York, Los Angeles, London, maybe San Francisco or Oakland. But today you are, I think, in Asia. Has it spread around the world by now, or has it been in these places for decades?

The Internet has allowed street art and graffiti culture to grow globally because even people who don’t travel can see a vast array of examples online. I think the impulse for people to create indoors and out is ageless but now there are many more ways to find inspiration and accelerate the technical learning curve.