Donald Trump "saved" a few hundred jobs by bribing the company with tax breaks. That's a grift, not a policy 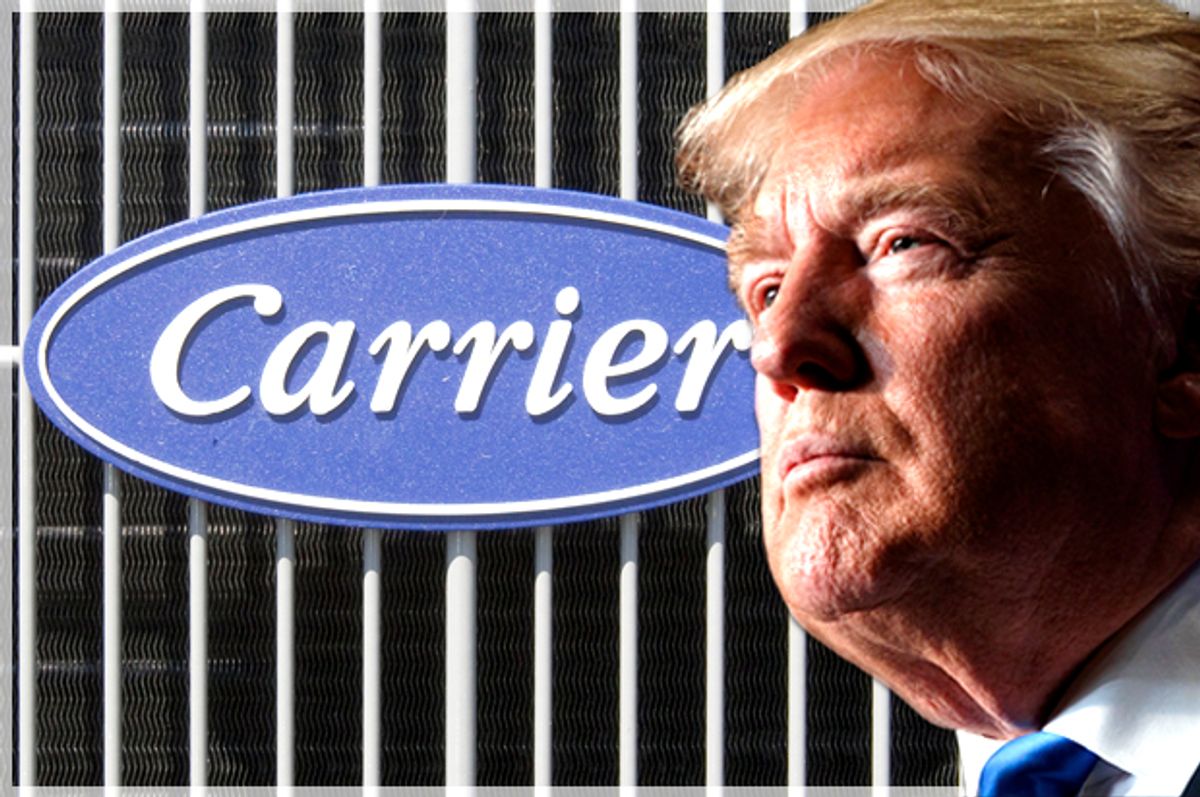 The more we learn about the agreement that Donald Trump reached with Carrier Corp. for the manufacturer to keep 1,000 or so jobs in Indiana instead of moving them to Mexico, the more the whole shaky edifice looks to be propped up by positive spin and Trump’s own immense self-regard. In other words, it is your typical Trumpian public relations coup.

In this, it is not unlike the type of hype the mogul might once have used to invade Atlantic City or Las Vegas. Announce you have reached a “tremendous deal” to build a giant casino or keep open a manufacturing plant, stand in an empty lot or on the shop floor to brag about it, then luxuriate in the hosannas tossed your way by local leaders whose constituents will soon be able to apply for jobs dealing blackjack or keep the ones they already had building air conditioners. By the time anyone notices all the ways the locals got screwed, you’ll be on to building your next building or starting a nuclear war between Pakistan and India or whatever.

Basically, the deal amounts to short-term ego gratification for Trump but does nothing to address the long-term problem of manufacturing decline in the Rust Belt or honestly level with blue-collar workers about the future of factory jobs that are growing ever scarcer in America. Trump has no more idea about how to do that than anyone else in his party — assuming it is even interested in doing so — beyond bribing companies with tax breaks. Which is not a long-range sustainable model for the manufacturing sector.

Here is what we know about the Carrier deal. The company had planned to close its Indianapolis plant and ship about 2,000 jobs to a new facility in Monterrey, Mexico, where it can get away with paying workers $19 a day. On the campaign trail this year Trump had been railing against the move as an example of the creeping globalism that has hollowed out America’s manufacturing industry and he promised to reverse it. If he couldn’t, he promised his voters, he would slap a 35 percent tariff on any products that Carrier made in Mexico and then tried to import into the United States.

After the election and a call to its CEO from the new president-elect, Carrier’s parent company, United Technologies, hammered out a deal with outgoing Indiana governor and Vice President-elect Mike Pence. In exchange for tax breaks that will cost the state of Indiana $700,000 a year for an unspecified number of years, Carrier will keep 850 manufacturing jobs in the state, along with 300 headquarters and engineering jobs that slated to move to North Carolina. About 1,300 jobs will still relocate to the glorious workers’ paradise of Mexico.

In addition, Trump supposedly promised an overhaul of the corporate tax code and an easing of regulations that will save Carrier many times the $65 million it had planned to save by moving its plant and 2,000 associated jobs from Indiana.

In short, after promising severe consequences to Carrier, Trump saved fewer than half the threatened manufacturing jobs in exchange for a multiyear hit to Indiana’s treasury and vague promises to roll back regulations and reform the tax code sometime in the future.

Of course it feels like a victory to the 850 people whose jobs were saved, along with their families. And no one wants to downplay the importance of that — though it should be noted that, rather ominously, the steelworkers union that represents the plant’s workers was completely shut out of the negotiations between the company and the government. Who knows if the company will later claim that the remaining workers need to take a pay cut to make the deal’s numbers work?

But at the end of the day, what a deal like this does is incentivize other CEOs to threaten to offshore their companies unless the United States president offers them a specific deal to stay. The companies that spend the most on lobbying will gain access to such negotiations. The president will negotiate with individual CEOs, one at a time, instead of working on policies that might create conditions for all companies to stay in the United States. The workers still won't have a seat at the table and will be subject to the whims of the wealthy executives — same as it ever was.

None of this will matter to Trump’s fans, who will only see him as fulfilling a campaign promise before he is even sworn in. But nothing he has done here has in any way changed the broken links between businesses and communities or done anything to create a society where companies look on their workers as people and not entries on a balance sheet. Trump has incentivized hostage taking by multimillion-dollar conglomerates that are determined to create more value for shareholders. How is that a different state of affairs than what we already have?