Donald Trump's poisoned planet: The Bush-era EPA set back climate-change progress by decades — this could be worse

Our next president can't end the EPA, as he promised, but he can use legal chicanery to render it toothless 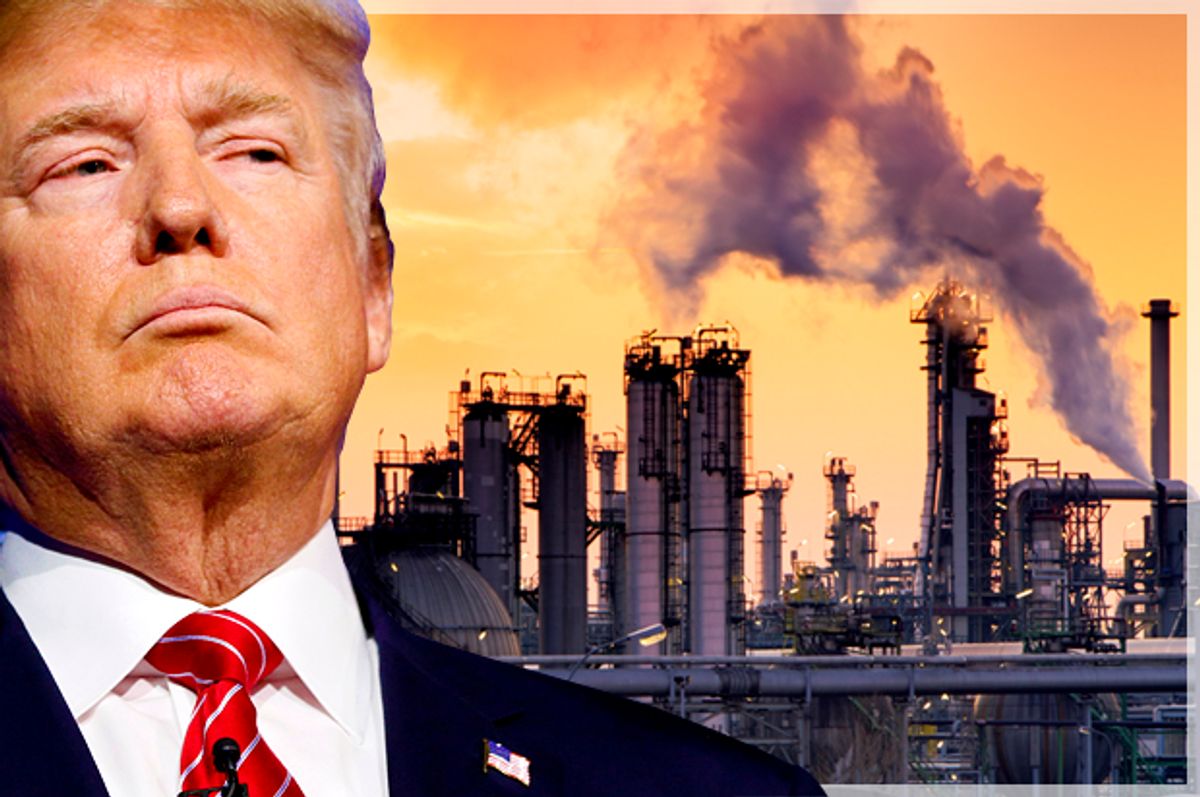 One thing that seems absolutely certain about President-elect Donald Trump is that he is an anti-environmentalist. During the Republican presidential debates, Trump lavishly promised to "get rid" of the Environmental Protection Agency "in almost every form."

On the campaign trail, he repeatedly boasted that he would repeal as much environmental regulation as he could get his hands on. Over the weekend Trump's incoming chief of staff, Reince Priebus, assured Fox News viewers that Trump continues to be a climate-change conspiracy theorist, saying, "he has his default position," which is that most climate science "is a bunch of bunk."

But getting rid of the EPA and environmental regulation isn't that simple. For one thing, a lot of it has been established by legislation such as the Clean Air Act and the Clean Water Act, and the president is legally bound, at least in theory, to enforce those laws. As researcher Sarah Anderson at The Conversation explained, getting rid of federal agencies is a lot harder than it looks, and Republicans who promise to do it generally don't succeed. In addition, there are a number of court decisions, such as Massachusetts v. Environmental Protection Agency, that have upheld the constitutional requirement for federal agencies to do the jobs they were established to do.

That doesn't mean, however, that Trump won't be able to seriously cripple the EPA's ability to do its job in regulating pollution. He can't abolish it or destroy it, but he can appoint an EPA head who uses legal and bureaucratic chicanery that forces the agency to avoid regulating pollution. We know that because it's exactly what happened to the EPA during George W. Bush's two terms as president.

Unlike Trump, Bush didn't really campaign on an anti-environmental platform, but as soon as he was in the White House, he appointed Vice President Dick Cheney, who had previously been the chairman of Halliburton, to head up an energy task force. The task force secretly met with 300 groups and individuals, largely from oil and gas companies. It wasn't until 2007 that Cheney lost a fierce battle to keep the details of those meetings secret. But the action sent a clear signal that Bush was in the thrall of polluting industries and climate-change denialists.

“The first EPA administrator, Christine Todd Whitman, actually resigned from the Bush administration after a few years, because her views were more moderate than those of the White House," John Walke, director of the Clean Air Project for the National Resource Defense Council, explained over the phone.

"It was widely understood at the time that the Bush administration wanted an EPA administrator who would be pliable and a willing figure to perform whatever misdeeds the Bush White House wanted performed on behalf of polluting companies and their lobbyists," Walke added.

In 2005, Bush's White House found its man: Stephen Johnson, a career bureaucrat who was also a willing conduit for whatever skullduggery the Bush administration and its industry benefactors wanted to pull. Even though the EPA was technically required by law to enforce legislation like the Clean Air Act, Johnson set to work forcing his underlings at the EPA to interpret environmental legislation in extreme bad faith, benefiting industry and doing as little as possible to prevent pollution.

As chronicled by John Sullivan, Tom Avril and John Shiffman of the Philadelphia Inquirer in 2008, Johnson routinely rejected the advice of experts hired by the EPA to review evidence and make recommendations about how best to execute environmental laws. He was bad across the board but had a special zeal for refusing to correctly enforce the Clean Air Act.

The "EPA has lost all or part of two-thirds of the Clean Air Act cases decided by the D.C. Circuit Court of Appeals," Rep. Henry Waxman wrote in a 2008 letter rebuking Johnson for wasting time and money passing pro-industry rules only to have them shot down in court. "In a majority of these cases, the courts severely rebuked EPA for an apparently willful disregard of the plain language of the governing law."

The phrase "severely rebuked" is an understatement. In 2008 the D.C. Circuit Court, deciding against the Johnson-led EPA in a case concerning mercury emissions, said the Bush administration's argument "deploys the logic of the Queen of Hearts."

Even though the Bush administration's efforts to wriggle out of enforcing environmental laws were frequently overturned by the courts, that doesn't mean its campaign to deregulate corporate polluters were unsuccessful.

Lax standards on industry will be "litigated in the courts and that takes a number of years," Dotson explained. "And then, after that’s done, the agency has to go back and collect new data and do analysis and propose a new rule and do public comment and finalize the new rule and have additional time for those controls to go into place.”

The cost savings for regulated industries from these delays can often amount to billions of dollars. As an example, Walke cited the fight over mercury emissions from power plants.

In 2000, right before Bush came into office, the EPA ruled that mercury emissions standards needed updating. The Bush administration dragged its heels, coming up five years later with a completely inadequate cap-and-trade standard that pleased industry but outraged environmentalists.

In the 2008 "Queen of Hearts" case, the D.C. Circuit Court overturned the Bush administration rule and told Johnson's EPA to write a rule that would actually deal with the mercury problem. The Bush administration then appealed to the Supreme Court, but the appeal was dropped in 2009, when President Barack Obama took office. Two years later, the EPA, now under the Obama administration, finally passed meaningful mercury regulations.

In other words, the Bush administration successfully delayed the implementation of effective mercury regulations for more than a decade. Considering that the Obama era regulations cost the power plant industry an estimated $9.6 billion a year, that means the delay could have saved the industry $100 billion.

By some estimates, however, the cost to public health from not regulating mercury appropriately was nine times higher, meaning that the Bush administration's decadelong delay amounted to nearly a trillion dollars in public health damage.

While Trump hasn't hired Dick Cheney (yet), there's every reason to be worried that a Trump administration is going to be just as bad, if not worse, than the Bush administration. Early signs are not looking good — and not just because Trump has hired climate-change denialist Myron Ebell to oversee the EPA transition.

Two of the rumored contenders that Trump is considering to head the EPA are Scott Pruitt, the Oklahoma attorney general who has led the fight to end Obama's Clean Power Plan, and Kathleen Hartnett White, the former head of the Texas Commission on Environmental Quality who spent her time in office undermining that state's ability to regulate air quality.

Both are terrifying prospects, but White has the added Trump-era advantage of a public record of outright nuttiness. She loves coal plants so much that she literally credits the rise of coal for the end of slavery. She also claims that U.N. officials are advocating communism as the solution to climate change.

"No matter how many times, the President, EPA and the media rant about 'dirty carbon pollution,'" White wrote in a 2015 piece for Townhall, "there is no pollution about carbon itself! As a dictionary will tell you, carbon is the chemical basis of all life."

Even the conservative Supreme Court admitted in 2007 that excessive levels of carbon contribute to climate change, meaning that the EPA is required to regulate it as a pollutant. But Trump is considering appointing an EPA administrator who disagrees with the basic premises and requirements of the job.

It's tempting to look at the history of the Bush administration and take comfort in the fact that its environmental officials were ultimately unable to gut the Clean Air Act, though not from lack of trying. Whatever damage Trump does to the EPA itself can, if a Democrat regains the White House, be undone.

Unfortunately, the same cannot be said for our planet. When it comes to climate change, humanity is literally in a race with time. The longer we delay in seriously slashing carbon emissions, the worse global warming is going to get. If Trump is anywhere near as successful as Bush was at stalling efforts to reduce greenhouse gas emissions, future generations will pay an incredibly steep price.