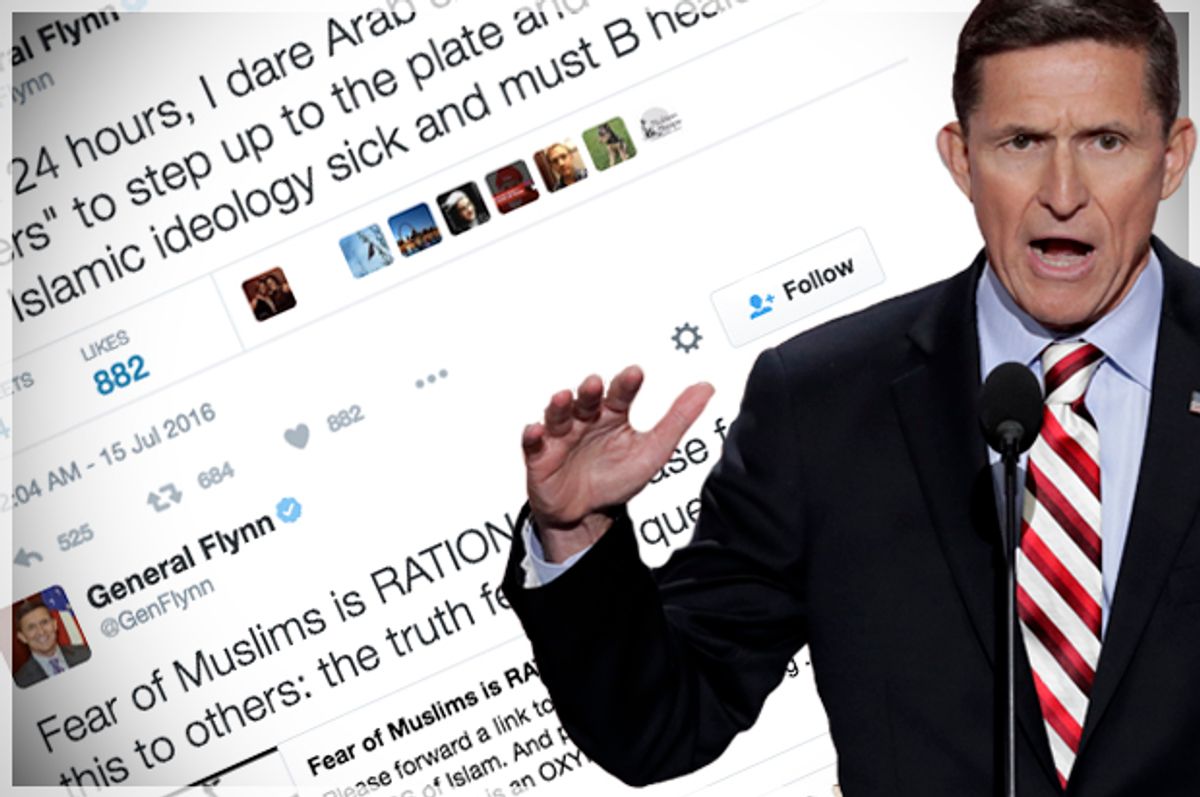 From the looks of it, Donald Trump plans to staff his administration with every plutocrat and retired general he's ever met. So far he's named billionaire Betsy DeVos, billionaire Wilbur Ross, along with multimillionaires Elaine Chao, Steve Mnuchin and Tom Price. He has interviewed the vastly wealthy Mitt Romney and is considering Gary Cohn, the president of Goldman Sachs, according to Politico. It's clear that whatever Trump may have said that sounded like economic populism during the campaign is unlikely to be translated into policy in his administration.

Bloomberg reported that Wall Street couldn't be more thrilled, quoting hedge fund manager Whitney Tilson happily agreeing that Trump's voters might be upset that their man is surrounding himself with billionaires and bankers:

I can take glee in that — I think Donald Trump conned them. I worried that he was going to do crazy things that would blow the system up. So the fact that he’s appointing people from within the system is a good thing.

Basically, it looks like Trump is going to deliver Wall Street's wish list and leave the "populism" to people like Jeff Sessions and Kris Kobach, who are designated to bring "law and order" to communities of immigrants and people of color. Surprise.
Despite the fact that Trump routinely disparaged the military's leadership on the trail, often saying that he knew far more than it does about everything, Trump is actually a military fanboy. (He is not, as often erroneously described in the press, a "history buff." He does not read.) As often as he has insulted the current brass for being "stupid," he would evoke the memory of World War II-era generals George Patton and Douglas MacArthur, who seem to be the only two he's ever heard of. It's clear that he has a deep fondness for "tough" military leaders of the kind he's seen in the movies.

He's said to be considering former generals David Petraeus, James "Mad Dog" Mattis and John Kelly, along with Admiral Mike Rogers for high-level jobs in the administration. As a Washington Post article by Phillip Carter and Loren DeJonge Schulman spells out in some detail, this is unusual and frankly unnerving. But none of them are as unnerving as the former general who has been tapped to serve as Trump's national security adviser, his close associate Michael Flynn.

Flynn's recent descent into extremism and his unfitness for this particular job have been well documented, but every day seems to bring new revelations of just how unhinged he really is. For instance, it came to my attention that in the days just before the election, Flynn was talking to the media about Hillary Clinton's alleged association with pedophilia, which means that he's enmeshed in the deepest reaches of the right-wing fake-news fever swamps. That reference could only be to #Pizzagate, the bizarre and spurious claim that Clinton was running a pedophile ring out of the back of a pizza parlor in Washington.
It also turns out that Steve Bannon isn't the only close Trump associate with connections to the white nationalist "alt-right." CNN's Andrew Kaczynski reported that a week after the election Flynn was praising Breitbart's odious racist provocateur Milo Yiannopoulos:

Speaking to a gathering of young conservatives at Trump's Washington hotel, Flynn said, "I was with Dinesh D'Souza last night, and the other, for the young audience here, for the young ones here, I mentioned it to a couple of you, I was also with Milo Yiannopoulos. . . . See, a lot of people in here won't know who he is. I tag him on Twitter, you know, because he's a phenomenal individual, and I'm mentioning him tonight because he spoke alongside of me last night to another group of folks."

He went on to call Yiannopoulos one of the bravest people he's ever met. Keep in mind that this is a former general who led troops into battle, praising the so-called courage of a nasty little online troll who describes Donald Trump as his "daddy."
It's known that Flynn travels on the far edge of the conspiratorial extreme of neoconservative thinking, having recently written a book called "The Field of Flight" with Michael Ledeen, a longtime proponent of the idea that the U.S. faces an existential threat from . . . well, pretty much everyone. (Ledeen famously speculated that even Germany and France were in cahoots with al-Qaida when they failed to back the U.S. invasion of Iraq.)
Flynn and Ledeen are heavily influenced by the late Laurent Murawiec, a French-American neocon ideologue who wrote a book they hail as a “masterpiece” called "The Mind of Jihad." Murawiec apparently found a web of connections between radical Islamism, Bolshevism and and the Nazis that Ledeen and Flynn find convincing. Among other things, Murawiec was associated for many years with Lyndon LaRouche, one of the fringiest political figures in American life.
Curious about Flynn's views of China and North Korea, about which he has said very little, The New York Times consulted "The Field of Flight" for clues as to his thinking. This is what it found:

In the introduction, [Flynn] wrote that radical Islamists “are not alone, and are allied with countries and groups who, though not religious fanatics, share their hatred of the West, particularly the United States and Israel.” The introduction continued, “Those allies include North Korea, Russia, China, Cuba and Venezuela.”

The general expanded on his definition of the anti-Western alliance: “The war is on. We face a working coalition that extends from North Korea and China to Russia, Iran, Syria, Cuba, Bolivia, Venezuela and Nicaragua. We are under attack, not only from nation-states directly, but also from Al Qaeda, Hezbollah, ISIS and countless other terrorist groups.”

“Suffice to say, the same sort of cooperation binds together jihadis, Communists and garden-variety tyrants,” he added.

The technical term for that absurd and paranoid worldview is "nutty as a fruitcake." And what's more frightening is that the man Flynn will now be working for can fit his own knowledge of world affairs in a shotglass.
As national security adviser, Flynn will be the last man in the room with this totally unprepared president when he makes the most important foreign policy and national security decisions. In an administration already filled with terrifying prospects in almost every regard, this is the one that sends chills down my spine.