On World AIDS Day: Coming to terms with the fallout of the judgments about the morality of pleasure made from within

Why was finding and naming Patient Zero so important to all of us, both friends and enemies? 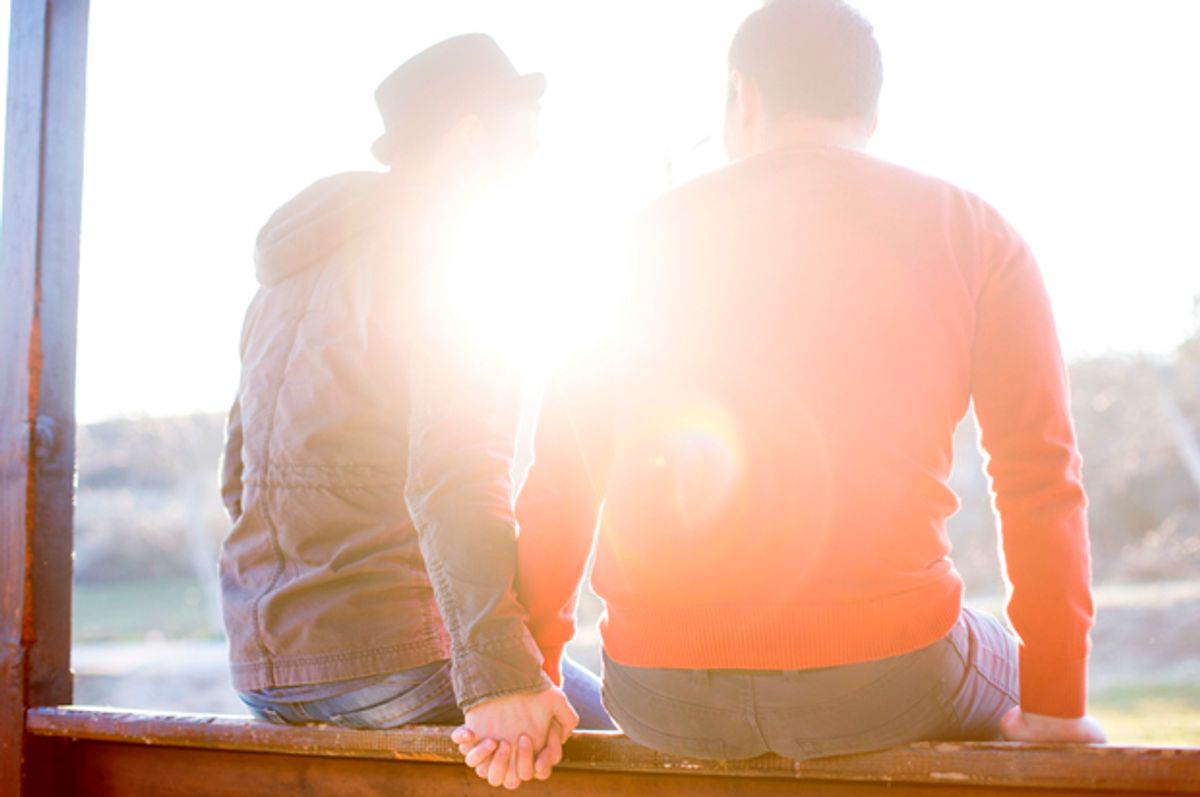 Gay couple sitting in a meadow enjoying the view (Getty/Pekic)
--

Gaetan Dugas moves like a shark throughout the opening moments of Randy Shilts’ remarkable feat of HIV and AIDS reporting “And the Band Played On.” Dugas is a strikingly attractive French-Canadian flight attendant, and Shilts generally poses him in front of mirrors, where Dugas can contemplate his own beauty and how he can exploit desire in the pursuit of pleasure:

On California Street, airline steward Gaetan Dugas examined his face closely in the mirror. The scar, below his ear, was only slightly visible. His face would soon be unblemished again.

Gaetan briefly examined himself in the mirror. Yes, a few more spots had had the temerity to appear on his face.

Gaetan Dugas examined himself closely in the steamy mirror of San Francisco’s most popular bathhouse.

Americans, but especially Americans named Randy Shilts, attach morality to pleasure. It’s something one must deserve, earn; pleasure can’t be pursued for its own sake. Again and again in the pages of his history on HIV and AIDS, Shilts’ sympathies are with those in committed, long-term relationships or those new to the community of early ’80s homosexuals.

While the overarching thesis of “And the Band Played On” is the avalanching cascade of mistakes and egos that allowed HIV and AIDS to devastate an entire population of gay men for years, Shilts, who would also die from complications of HIV and AIDS, is judgmental of hedonism. In 1987, when “And the Band Played On” was first published, hedonism made sense to attack, just like it made sense to malign Gaetan Dugas as a creature motivated only by his own beauty and hunger.

As it turns out, Shilts (and those who bought into the moral calculus of HIV infection) was wrong — about Gaetan Dugas, about the morality of pleasure and about where blame needed to be placed.

When I think about World AIDS Day, I think about this: In the 1980s, almost every interesting gay man in American theater died. The fact that “The Lion King,” “The Producers” and “Hamilton" have all been the culture-stifling juggernauts that they have been is almost entirely attributable to this holocaust.

This is what happened: Interesting talented and provocative people fucked, got AIDS, got sick and died. Sometimes as quickly as the time it took to read this sentence. Sometimes in long humiliating epochs punctuated by moments of unrealized hope.

We’ve seen these kinds of cultural purges before: In the 1930s and '40s, American communism was a scourge that needed bleaching so that all the most interesting writers, philosophers and artists — who also happened to have some alignment with early American communism and, though not always, often Jewish — were either jailed or terrified into silence and hiding. Afterward in the 1950s, we see a culture dominated by capitalist values and ideals, and television shows like “Leave It to Beaver” or “Father Knows Best” or “My Three Sons” dominate with a very specific idea of what Americans should do and look like.

So now, in a post-AIDS era — and by post-AIDS I don’t want to suggest that we’re beyond it; our eyes are simply now open, even if often focused elsewhere — we’re left with a landscape where all David Sedaris is doing is writing the same essay again and again about a funny thing that happened when he tried to mail a letter and this whole time there's been a Gore Vidal-shaped hole in our intellectual culture and Fran Lebowitz is only one woman. There have been glimmers: “Hedwig and the Angry Inch” is a wonderful throwback to when theater could be galvanizing. But then we let Neil Patrick Harris get in there — the gay community’s thirsty Anne Hathaway — and that fire and heat and transgressive power start to drain away.

Would Michael C. Hall have been allowed to play Hedwig if Freddie Mercury were still alive? I only ask the question.

We now know that Gaetan Dugas wasn’t Patient Zero in the sense that Randy Shilts wanted him to be and the way Americans have always wanted easy answer to infectious questions. “And the Band Played On” needed a villain in its early pages — someone on whom to pin the blame of spreading HIV throughout cities like Los Angeles and San Francisco. And because Gaetan Dugas was seductively attractive, and because he was clearly a man who relished pleasure (“extremely sexually active,” his Wikipedia page still says), and because he was dead by the time “And the Band Played On” was published, he was an easy man to scapegoat.

In 2007 an article in “Proceedings of the National Academy of Sciences” suggested that it was likely that HIV arrived in the U.S. from Haiti in 1969. And early this year, a genetic study of blood samples conducted by evolutionary biologist Michael Worobey seemed to point to a more complicated blossoming of HIV and AIDS in the U.S., where Dugas is “in the middle, not at the beginning” of the family tree of the virus.

It was never useful, as it turns out, to find a person or a point in time to blame for this sexual infection. It allowed for a critical, and criticizing, distance that granted people security in parceling out compassion. Someone with an HIV diagnosis had clearly sought it out, must honestly have known the risks of his behavior, should therefore be accountable to the consequences.

Americans look at consequences this way: they’re for someone else.

I came out in 1992, when I was 20 years old, after blowing my assistant manager Dave in a motel off the interstate outside Roseburg, Oregon. There’s a line from a poem by Dorianne Laux: “so that now/ when I think of love/ I think of this” and sometimes when I pass any sort of rundown motor lodge I wonder how Dave is. His best friend and roommate was a man named Mercer, and he was the first man I met who was HIV positive. I spent a lot of time wondering what he did to get it.

My early sexual life — and even calling it a “sexual life” makes it sound more active than it actually was — was rounded with fears of AIDS. It had an inevitable feeling about it, a not “if” but “when” character that tired out one’s vigilance while also terrifying every cough, sniffle, sneeze, loose stool or prophetic dream. “Have I had this cold too long? Why are my glands swollen? Isn’t illness a kind of magic anyway? Maybe I got it through sheer will of belief.”

It was in this Brave New World of human sexuality in 1996 that I took my first grown-up job — one for which I didn’t wear a name tag and remind drivers to pull up to the second window. It was at a church-sponsored HIV Day Center in Portland, Oregon, and I thought, This is how I will give back.

I assumed I would spend my days with gay men of a certain age who would sit in comfortable chairs making quilt squares. They would tell me about those early days of rampant '70s sexuality and seeing Debbie Harry at Studio 54. Everyone would know Harvey Fierstein and no one would be an actual human being but each an angel to make me feel better about my own healthy choices. It was a kind of tourism I had planned, and my condescension was the cute look I wanted to wear out into the world.

Most of the men I worked with at the HIV Day Center were heterosexual drug addicts who came to use our phones, eat lunch and scam bus passes from us because if I said no, it’s possible Mary would say yes. (Actually, the opposite was mostly true; I was young and bathed in naive compassion. I would help everyone with a bus pass and an extra sandwich and even long-distance phone cards even after it was pointed out to me that all those kindnesses were being used as transactional items for street drugs.)

It has taken 20 years, though, to correct my thinking. To not see HIV and AIDS as inevitable or evitable. To attach no more value to an infection than I would to a cold. To think about the weight of words like “clean” and “disease” and “fault.” To recognize that sometimes being HIV negative is nothing more than an accident of biology. That it is as much a performance as it is a reality.

December is an unfair month for World AIDS Day. December, with its skeleton trees and gray skies and thoughts of endings. The stigma around HIV and AIDS – the fear around infection, the risks involved with sex, the vocabulary of cleanliness – isn’t helped when we’re bundled in protective sweaters, hiding away our bodies from the cold.

World AIDS Day deserves a warmer month, a brighter sky, and more compassion than I’ve ever seen us muster before.

We can start by apologizing to Gaetan Dugas. We can end by thinking about June.