Environmental degradation? Corporate rule? Walls between rich and poor? It's not news — it's Syfy's latest show 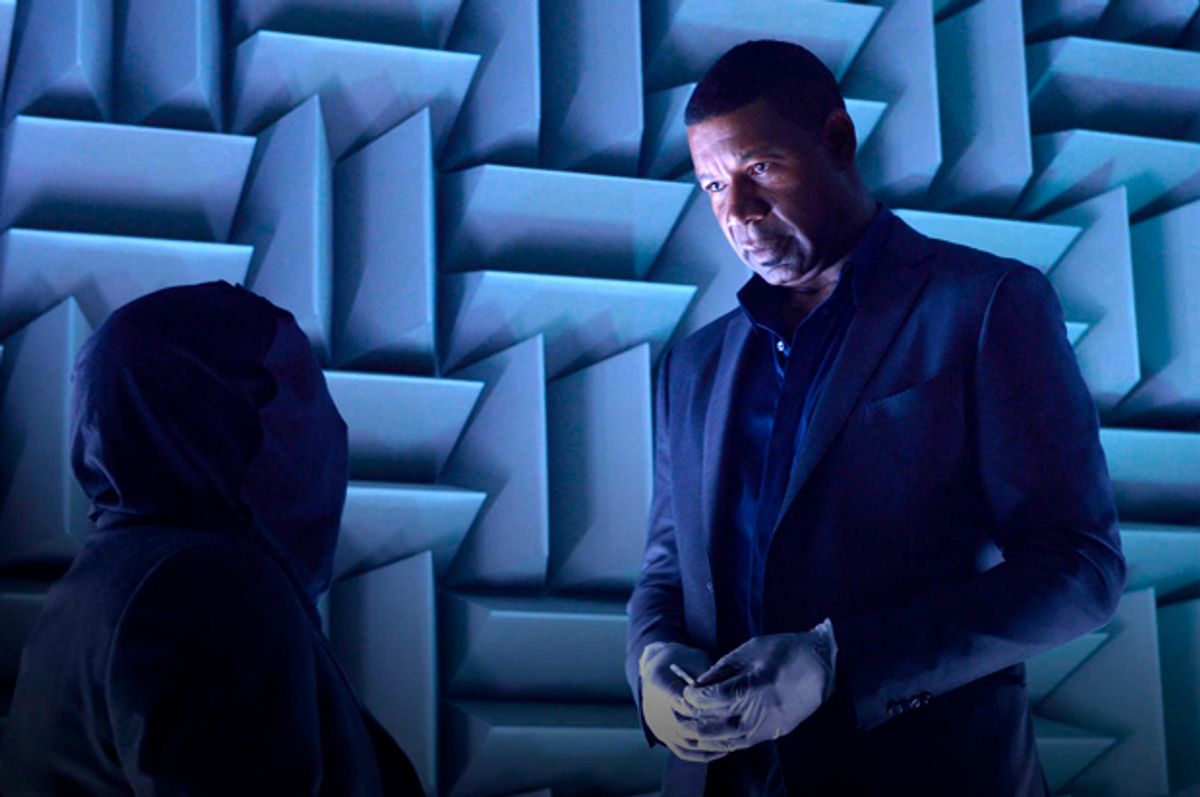 The first thought that crossed my mind upon watching Syfy’s new series “Incorporated,” airing on Wednesdays at 10 p.m. starting this week was “Oof . . . too soon.”

For in this series, which is executive produced by Matt Damon, Ben Affleck and Jennifer Todd, creators Alex and David Pastor have given us a world that feels like a fairly accurate version of what life will look like in 2074, the year in which the drama is set. Between the haves and the have-nots are actual walls, keeping the fortunate few inside wealthy, spotless Green Zones and keeping the miserable poor in the slums known as Red Zones.

The Green Zones operate as nation states, in a sense, run by rich corporations. And in this version of future, corporations act as governments and godheads, competing for supremacy with one another and maintaining order among its citizens — er, employees, with a system that demands absolute obeisance and loyalty.

The benefits of working at these global megacorporations include safe housing, regular meals and luxuries such as medical care, even access to upscale items such as clean water and real meat. Procreation is controlled, and cute cartoons program children to spy on their parents.

Those living in the Red Zones have to scratch out a living anyway that they can and rarely, if ever, cross over the class divide guarded by armored security.

Today's reality already has many of us reeling at the prospect of bank deregulation, disregard for environmental and health policy and the growing influence of corporate personhood on our political system. The idea of devoting a portion of our prime-time viewing to a fictional version of an authoritarian future where leaders wax on about “the infinite glory of the corporate mother” seems just a little masochistic.

That depends, as always, on the story’s originality. Dystopian tales will always be the meat and potatoes of the science fiction genre, regardless of what’s happening in the real world. The world went nuts for “The Hunger Games” and slightly less so for “The Maze Runner” franchise and the “Divergent” films. On television, The CW has built a passionate audience around “The 100.”

And next year Hulu will debut a series based on Margaret Atwood’s 1985 novel “The Handmaid’s Tale.” Meanwhile, TNT has ordered a pilot based on the cult film “Snowpiercer.”

The point being, there is and will always be a market for stories exploring wretched possibilities for humanity’s future, provided the plots are relatively unique and compelling. “Incorporated” is neither. But if you’re a prepper who’s fond of drawing inspiration from fiction to sketch out your plans, you could do a lot worse than spending at least a small amount of time with this show.

Here are some useful takeaways from “Incorporated.” Think about moving to a northern region. Stock up on water filters and, you know, maybe consider working for a billionaire who runs a solid corporation.

Make sure he’s a decent guy, too. Otherwise, you’ll be screwed. According to the version of what lies ahead for us presented in “Incorporated,” such people will be kings among the elite. In the show’s version of 2074, the planet has been so thoroughly degraded that every system not overseen by corporate entities has descended into total chaos.

Miami? Dropped into the sea. Texas? A scorched wasteland. And no, Salon reader, I will not make a snarky joke. Here, the refugee crisis is homegrown and regional. Climate escapees fill the Red Zones, where people have long forgotten what natural food tastes like and exist on rations.

The story’s central hero Ben Larson (Sean Teale) was born in such a slum but somehow made it into a Green Zone paradise in Milwaukee and no longer has to worry about that life.

As an employee of Spiga Biotech, Ben lives with his wife Laura (Allison Miller), a plastic surgeon, in a lovely home and they have all their needs met. What’s more, Ben married up: Laura’s mother Elizabeth (Julia Ormond) happens to be the head of Spiga’s U.S. operations, effectively making her as powerful as a head of state.

This doesn’t mean Ben can operate with impunity — far from it. For those working at Spiga, a slip from the corporate ladder could mean torture and lead to one’s entire family being banished to a Red Zone. Overseeing everything is Spiga Biotech’s head of security, Julian (Dennis Haysbert), and Ben is barely able to remain a step ahead of Julian as he makes moves from his privileged position to help those he left behind on the outside, including his friend Theo (Eddie Ramos).

Echoes of “Blade Runner,” “1984,”  “The Fifth Element,” “Waterworld” — hell, even Terry Gilliam’s “Brazil”— are easily detectable in “Incorporated,” along with so many other sci fi stories that they defy counting.

Being derivative isn’t necessarily a deal breaker for a television series, as long as the acting or the script can elevate the show. But not even Ormond or Haysbert can make their characters seem like anything more than two-dimensional figures. Teale, for all his efforts, barely registers as more than a handsome, brooding face.

It is curious, though, to witness the arrival of such a show at this precise moment in history; it seems concurrently right on time and completely wrong for our collective mood. It feels a little like we’re watching some cable re-enactment of a history that’s yet to happen.

And if that’s what you want, you’ll find better entertainment in renting one of those movies mentioned above.