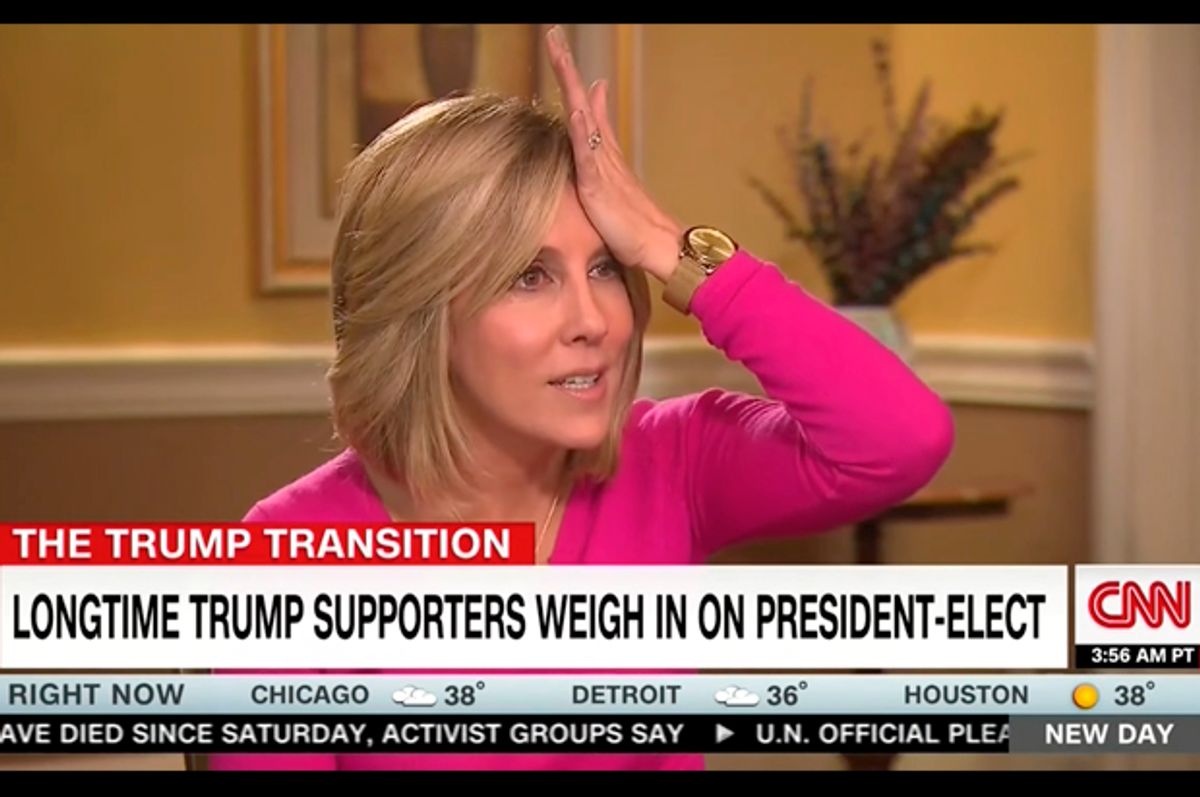 The misinformation rampantly spread across a highly segmented media landscape has received increased attention since the propagation of so-called fake news has been widely credited with helping New York businessman and political neophyte Donald Trump win the White House. The problem has now become so obvious and widespread that a former Fox News host now at CNN felt compelled to debunk a false report from her former employer's parent company while interviewing a Trump voter.

CNN's Alysin Camerota sat down with several long-time Trump supporters for a focus group-style interview on Thursday's "New Day" and pressed them for their thoughts on the president-elect's transition and postelection performance.

Each of the participants, with whom Camerota has spoken with before on CNN, praised Trump's performance thus far.

"How do you feel about the 'white nationalist movement,' the alt-right, some neo-Nazi salutes that we've seen? What are we to make of what feels like a groundswell of that with the Steve Bannon-Breitbart connection," Camerota asked the group after one participant claimed people "that Trump has appointed or nominated have all been top of the class, No. 1 in their field, extremely talented, great leaders on their own.”

“That’s been around forever,” Paula Johnson, co-chair of the New Hampshire-based Women for Trump, pushed back against Camerota's questioning. “You know, if you keep reporting on it, it’s going to grow like a cancer. If you forget about it then it’s probably going to go away." Using a favorite rhetorical device of her candidate, media bashing, she added, "The media has to harp on everything. And it’s wrong.”

Johnson continued that many anti-Trump voters had little room to complain if they failed to vote in the election. “Voting is a privilege in this country," Johnson said before adding, "And you need to be legal not like [in] California where 3 million illegals voted.”

A confused Camerota asked Johnson, “Where are you getting your information?”

“From the media!” Johnson insisted. “Some of them were CNN, I believe.”

Johnson then decided to source her false report with President Barack Obama.

“I think there was a good amount because the president told people that they could vote,” Johnson claimed. “They said, ‘The president said I could vote. I’m here illegally.'”

To her credit, Camerota kept up her line of questioning while seeming to hold back laughter.

“Did you hear President Obama said that illegal people could vote?” asked Camerota, to which nearly all the participants nodded their heads and replied, "Yes."

“Tell me, where?” Camerota demanded.

At that point, another Trump voter directed Camerota, "Google it. You could find it on Facebook.” So she did.

The Mediate story referred to a Fox Business Network segment on which its host, Stuart Varney, falsely claimed Obama “appears to encourage illegals to vote and he promises no repercussions if they do.”

Despite Camerota's sharing of the Mediate story critiquing the Fox Business Network segment, the Trump voters on CNN remained wedded to the misinformation nearly a month after the election.

“You, as you sit here today, think that millions of illegal people voted in this country and you believe that there was widespread voting abuse — in the millions of people?” a clearly exasperated Camerota continued to challenge the Trump voters.

“They do not allow illegals — you mean voter fraud, California allows?” asked a dumbfounded Camerota.

“I believe there was voter fraud in this country,” Johson insisted, remaining steadfast to her false belief.

And that is how a misinformation campaign can propel to the White House a con man who lost the popular vote, while his supporters continue to believe that they were somehow cheated.