The "General's General" made Trump change his mind about waterboarding 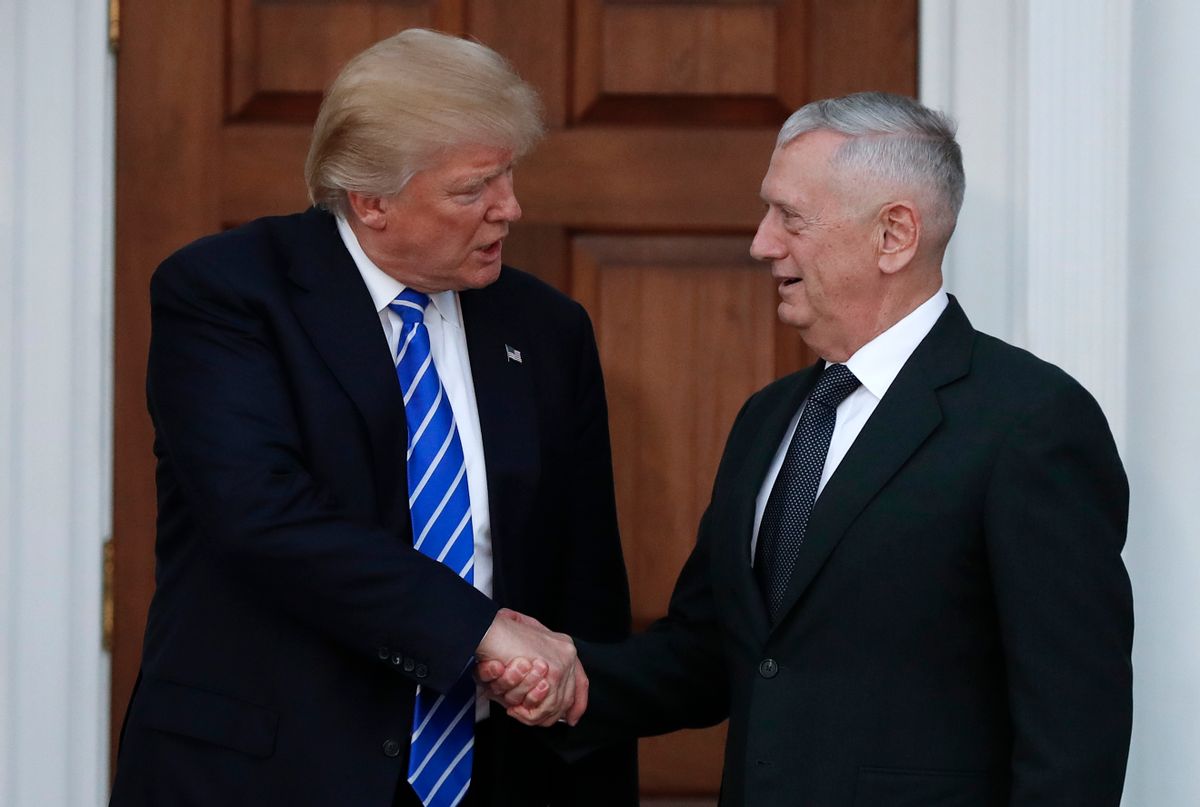 Donald Trump told a crowd in Cincinnati Thursday that he would be naming retired Marine General James Mattis as Secretary of Defense. In a Nov. 20 tweet, the president-elect said that he was considering the "true General's General" for the position.

Mattis retired from his position as commander of the U.S. Central Command in 2013 and holds some views at striking odds with the president-elect, including ideas about waterboarding and PTSD amongst veterans.

"They say he's the closest thing to Gen. George Patton that we have and it's about time," Trump said of "Mad Dog" Mattis.

General James "Mad Dog" Mattis, who is being considered for Secretary of Defense, was very impressive yesterday. A true General's General!

He said "it's fun to shoot some people"

"Actually it's quite fun to fight them, you know. It's a hell of a hoot," Lt. Gen. Mattis controversially said at a panel discussion in San Diego in 2005. "It's fun to shoot some people. I'll be right up there with you. I like brawling."

Mattis who earned the nickname "The Warrior Monk," is known for telling it as it is.

In a letter of motivation to young marines in 2003, he wrote about what was expected when entering into battle: "Chemical attack, treachery, and the use of the innocent as human shields can be expected, as can other unethical tactics. Take it all in stride. Be the hunter, not the hunted: never allow your unit to be caught with its guard down." The letter can be viewed on Business Insider.

Trump met with the Mattis on Tuesday. The president-elect told the New York Times on Tuesday that after the meeting he changed his mind about waterboarding.

"He said, ‘I’ve never found it to be useful,'" Trump told the Times, "'Give me a pack of cigarettes and a couple of beers, and I’ll do better.'"

In February, Donald Trump said that he would “absolutely” authorize waterboarding, “and something beyond waterboarding” when interrogating terrorists.

While many of Trump's cabinet picks have come under fire for their respectability, Mattis is incredibly well-respected in the military.

"I have had the privilege of knowing General Mattis for many years. He is without a doubt one of the finest military officers of his generation and an extraordinary leader who inspires a rare and special admiration of his troops. General Mattis has a clear understanding of the many challenges facing the Department of Defense, the U.S. military, and our national security. America will be fortunate to have General Mattis in its service once again," McCain said in the statement.

Pleased Pres-elect has selected Gen Jim Mattis for #SecDef - one of the finest military officers of his generation https://t.co/3tOltWswgC — John McCain (@SenJohnMcCain) December 2, 2016

Democrats are cautious about preserving civilian control of the military.

New York Sen. Kirsten Gillibrand was one of the first to say she would not support Mattis as the head of the Pentagon.

"While I deeply respect General Mattis’s service, I will oppose a waiver, civilian control of our military is a fundamental principle of American democracy, and I will not vote for an exception to this rule," said Gillibrand.

Rhode Island Sen. Jack Reed (D) explained that Congress would have to alter the law with a waiver in order for Mattis to serve as Secretary of Defense, a civilian-controlled position.

"It is clear that General Mattis is a respected Marine and strategic thinker who served with honor and distinction​," Reed, a member of the Senate Armed Services Committee, said according to The Wall Street Journal. “What is less clear is how Congress would go about changing the law to allow him or any recently retired senior officer to serve as the head of the Pentagon. That would require ‎a debate about our Constitutional principle of civilian control of the military and passing a new bill.”

"Mattis, the warrior-monk, displayed his strategic and operational genius as a Marine general, but wrangling the Defense Department bureaucracy is a different matter" Phillip Carter and Loren DeJonge Schulman of the Center for a New American Security wrote in an op-ed for The Washington Post, "he viscerally disdains the minutiae and machinery of the Pentagon."