With the phony Carrier deal, Trump has raised his supporters' expectations even higher. This can't end well 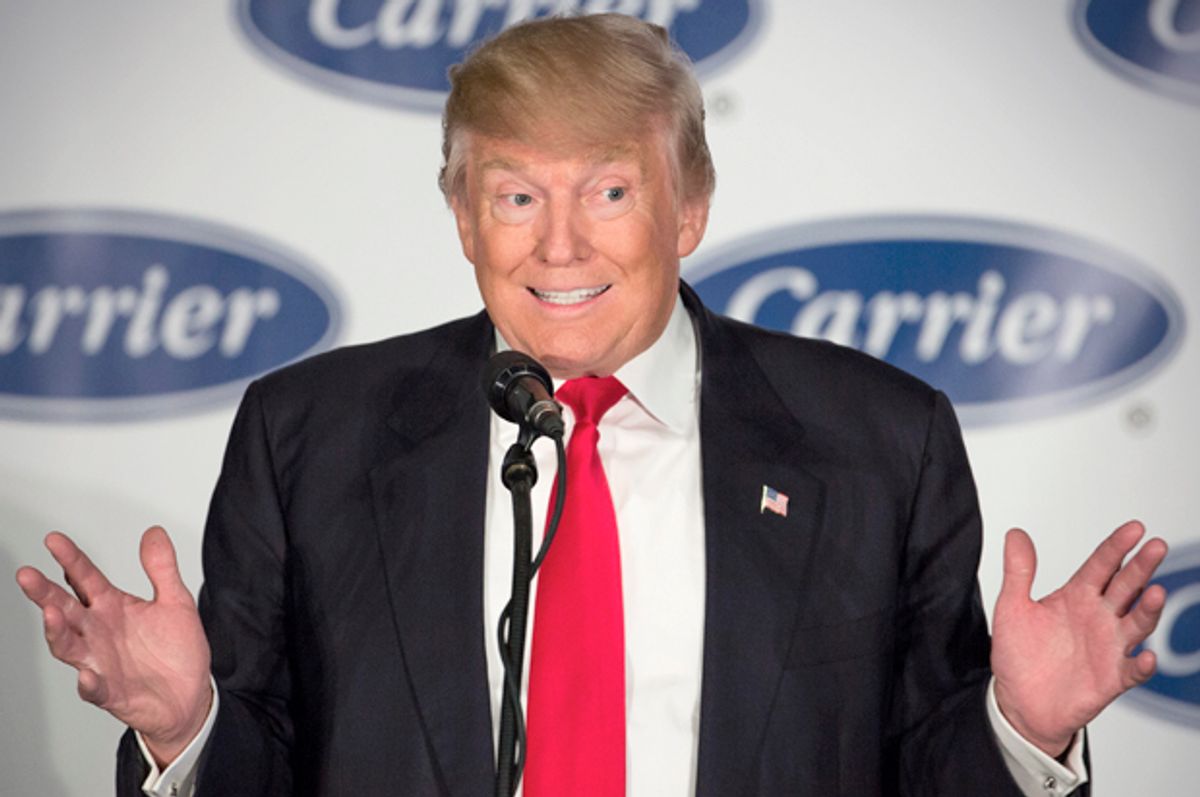 On Thursday night President-elect Donald Trump got to do what he loves more than anything for the first time since the election: bask in the love of his fans. He held a thank-you rally in Cincinnati, where he recounted all the highlights of his glorious victory as a sea of followers in red "Make America Great Again" hats cheered and chanted, just like the good old days of last month.

It seemed a bit odd, since Trump isn't running for anything at the moment. But since the networks all carried it live as breaking news one can imagine that this may become the main way — aside from Twitter, of course — that Trump communicates with the country. He certainly isn't holding press conferences.

This rally came on the heels of Trump's earlier photo-op in Indianapolis, where he took credit for the Carrier deal engineered by Indiana Gov. and Vice President-elect Mike Pence, giving the company a $7 million incentive to keep about a thousand jobs in the state. (Sen. Bernie Sanders wrote a blistering op-ed in The Washington Post exposing the deal as typical corporate welfare that demonstrates to every CEO how to extort money from the taxpayers — also known as workers.)

It turns out that Pence had rejected this same deal back in 2014, but apparently this time Trump persuaded him to change his mind.

In fact, it turns out that Trump didn't even remember he had made a campaign promise about Carrier. At the Indianapolis event on Thursday morning, he explained that he was watching the news about a week ago and saw a story on the plant:

And they had a gentleman, worker, great guy, handsome guy, he was on, and it was like he didn’t even know they were leaving. He said something to the effect, “No, we’re not leaving, because Donald Trump promised us that we’re not leaving,” and I never thought I made that promise. Not with Carrier. I made it for everybody else. I didn’t make it really for Carrier.

And I said, “What’s he saying?” And he was such a believer, and he was such a great guy. He said, “I’ve been with Donald Trump from the beginning, and he made the statement that Carrier’s not going anywhere, they’re not leaving.” And I’m saying to myself, “Man.”

And then they played my statement, and I said, “Carrier will never leave.” But that was a euphemism. I was talking about Carrier like all other companies from here on in. Because they made the decision a year and a half ago.

But he believed that that was — and I could understand it. I actually said — I didn’t make it — when they played that, I said, “I did make it, but I didn’t mean it quite that way.”

This is the story he saw:

Carrier a/c became a rallying cry for Trump on the campaign trail. Now employees are counting on him to fulfill his promise. Watch @kevtibs. pic.twitter.com/vS4fgi8Zfg

In other words, Trump had just been running his usual con game on the campaign trail. But once he saw that story he realized he had a chance for a P.R. win and he took it.

At a panel of campaign operatives on Thursday evening, Trump adviser Corey Lewandowski explained that expecting Trump's words to have literal meaning is the media's mistake. The Washington Post reported:

“This is the problem with the media. You guys took everything that Donald Trump said so literally,” Lewandowski said. “The American people didn’t. They understood it. They understood that sometimes — when you have a conversation with people, whether it’s around the dinner table or at a bar — you’re going to say things, and sometimes you don’t have all the facts to back it up.”

Those workers at the Carrier plant took Trump literally. And plenty of others did too. Phil Mattingly at CNN spoke with people in Cincinnati yesterday and asked them what they expect. He tweeted the following observations:

For Trump supporters, the Carrier deal is pure validation — and something they are 100% certain can be replicated here and elsewhere. Point out the IN Gov role, or the state incentives in general, or the DOD contracts — doesn't matter. This is exactly what he said he'd do.

I've heard from many of them today, touting the Carrier deal. They don't know the details. Don't work in manufacturing. But they are genuinely stunned and excited. "If he can do this before he takes office, just imagine . . . "

I proceed explain the specifics, the holes in it, the longer term problems it may present — "Dude, stop." Don't want to hear it.

And it also sets up an interesting conundrum for the Trump team — expectations among supporters were already high.

Expectations among the "meh" Trump voters weren't so much. Well, now they are, too.

So how do you deliver for states like OH, or PA, or WI, or MI, when your VP isn't the governor and there aren't contracts to threaten?

The answer is that Trump can't deliver for those states, and he won't. He's not a magician or a miracle worker. And no matter what Lewandowski says, there are millions of people who believed that he was going to deliver exactly what he promised.

But then, this is how Trump has always operated, isn't it? When you think about all the people who trust him to bring back jobs that have been taken over by machines like those in steel manufacturing or to revive dying industries like coal mining, it reminds you of his numerous scams over the years when he promised people wealth and success and ended up stealing their money and crushing their dreams.

Indeed, barely two weeks ago Trump abandoned his longtime vow and settled several lawsuits claiming fraud against his Trump University. He was accused of promising thousands of people untold riches if they believed in him and followed his methods for getting rich. Unfortunately, it was a scam, and people were conned out of large sums of money and received nothing worthwhile in return.

Sadly, that's likely to be the fate of most of those Trump voters who expect him to re-create an imaginary past and make them all prosperous and successful. He himself said that those promises were all "euphemisms," and he didn't mean them literally. Trump is now running his biggest con, this time on the entire population of the United States. He has every reason to believe he'll get away with it. After all, he's never paid any real price for his behavior before.