Half Windsor, all fiasco: Trump's necktie-gate may undermine his statesmanlike gravitas

If Donald Trump can't find a better solution for keeping his tie in place, he could end up embarrassing America 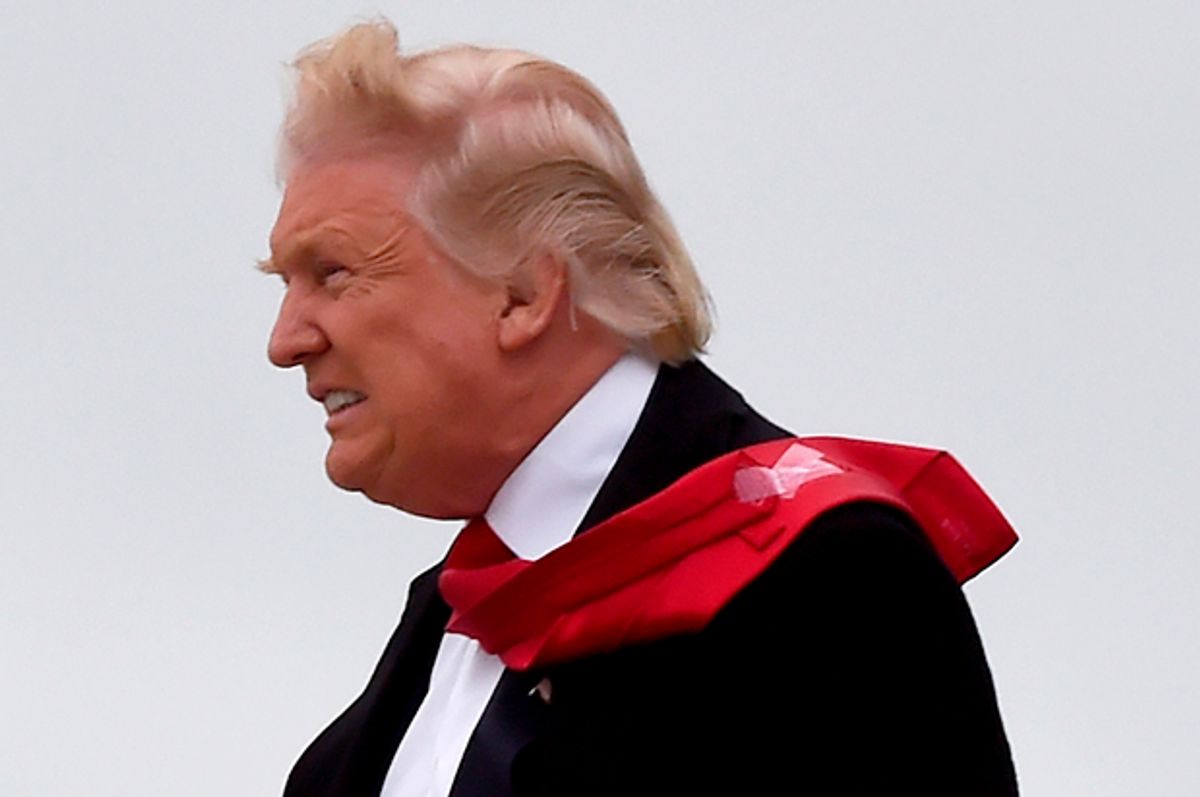 It’s a distressing time for many of us as we look around and see the ascendant Republican Party readying an assault on our already beleaguered social safety net and pluralistic traditions. With so much to worry about, it feels almost cruel to throw yet another crisis onto the pile. Unfortunately, circumstances demand it.

As you might have already seen, Donald Trump was recently photographed emerging from his airplane as a gust of wind caught his necktie and revealed a dirty secret. The president-elect, who is a man of substantial means, holds his necktie together with Scotch tape — a discombobulating mishmash of Armani aesthetics and hobo fashion sense.

As upsetting as this is, I really can’t make head or tail of it. Clearly Trump is concerned about how terribly embarrassing it would be to have the two ends of his tie flopping about willy-nilly. And yet the solution he has landed upon -- or someone else in his inner circle has -- is to make a third-grade arts-and-crafts project out of his wardrobe.

What the hell is going on here?

Let’s start with the reason why he’s even in the situation of having to tape down his own necktie. Trump likes to wear red “power ties” because he is the living stereotype of a 1980s New York power broker. And he likes to wear his ties long so that they extend well past his belt buckle and form a crimson arrow that points at his crotch. There’s a trade-off for transforming your necktie into a gaudy billboard for your penis: you can’t do what normal people do and just tuck the narrow end into the conveniently placed loop on the back the broad end.

Since penis advertisement is basically the core of what passes for Donald Trump’s essence, he can’t be expected to start wearing his tie like a normal human male would. Thus an outside-the-box solution is needed to keep his phallocentric look in order.

But Scotch tape? Come on, buddy.

Consider the engineering aspects of using Scotch tape (or, more properly, adhesive tape) to hold together a piece of fabric. As most of us are aware, tape purchased at the drugstore is a low-grade adhesive product that loses its stickiness with distressing rapidity. The material that could barely keep that Clockwork Orange poster affixed to the wall of your shitty dorm room is now responsible for maintaining the sartorial dignity of the next leader of the free world.

And we know that Trump knows how ineffective tape is. Just look at how he affixed it to his tie: One piece to hold down the narrow end of the tie, and another piece to hold down the first piece. Even with this doubling up, what’s going to happen is that the tape will quickly lose its adhesiveness as it pulls tiny silk threads from the back of the tie. (Or polyester threads, as the case may be.) The Scotch-tape solution buys him maybe half an hour of tie control. Frankly, I’m shocked that it endured the gusty winds on that tarmac.

Consider the impact this ridiculous necktie arrangement could have on statecraft. Let’s say, for example, that Trump follows through on the White House invitation he reportedly extended to Philippine president and murderous sociopath Rodrigo Duterte. Imagine what could happen if, while they’re sitting together for an Oval Office photo op, that little cross of silk-fuzzed tape comes flitting down from behind Trump’s tie and lands on his lap. What an embarrassing loss of face it would be for Trump to have the evidence of his necktie jury-rigging on display as he sits next to a world leader who endorses the murder of journalists.

It's not as if there aren’t other, less absurd solutions out there for this problem — tie clips, tie tacks, a goddamn safety pin. But for some reason he goes with Scotch tape. Why? A man who lives in a gilded nightmare of an apartment and whose business is based on slapping his name on every imaginable product is clearly not above the subtle ostentation of a necktie accessory. There was even a Donald Trump Signature Tie Clip for sale at Macy’s, at least until the department store pulled Trump’s merchandise from its shelves on account of his massive racism.

Whatever the reason for this Scotch-tape fiasco, it’s embarrassing for Trump and the country he leads. To fix this, he should look to some other world leaders for tips on necktie control: maybe start buttoning his suit jacket a bit higher, or consider a flattering sash, or go crazy and just ditch the shirt-and-tie look altogether. Whatever Trump does to remedy his necktie situation, he’ll have to do it soon. The last thing we need right now is for the next president to embarrass us on a daily basis in the eyes of the world.