So much for sticking it to the fat cats: Donald Trump's Treasury nominee embodies the worst of predatory finance 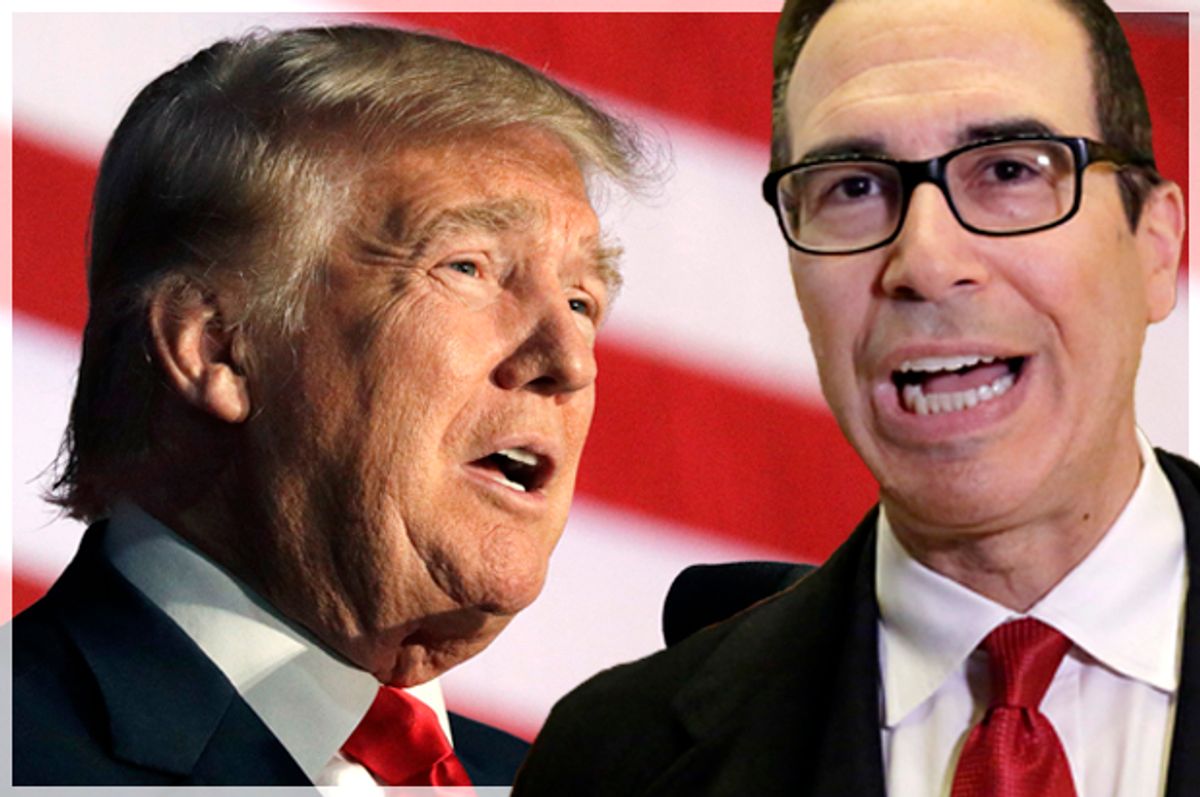 It’s still baffling that a billionaire fraudster who preyed on the financially insecure was able to present himself to the electorate as a champion of the working class, but that’s the curious political situation we find ourselves in with Donald Trump.

The president-elect is doing his level damnedest to reinforce that ill-gotten reputation by working out a deal with Carrier Corp. to prevent the outsourcing of 800 jobs to Mexico. Trump is, again, presenting himself as a warrior for the blue-collar worker, even though the deal he cut with Carrier involves giving the company a huge tax break while it moves forward with outsourcing 1,300 other jobs.

Taking on Trump requires scraping away this thin populist patina and exposing him as a friend and enabler of predatory capitalism. Thankfully for Democrats, Trump is giving them some juicy opportunities to do just that by populating his Cabinet with some apex predators from the financial system. And if they’re going to expose Trump as a fraud, Step 1 is making his Treasury secretary-designate, Steven Mnuchin, a household name.

In one respect, Mnuchin already is a household name: Namely, he made a lot of money by foreclosing on working people and throwing them out of their households. As the financial crisis of the late-2000s was unfurling, Mnuchin (a veteran of Goldman Sachs) and some of his Wall Street buddies worked out a deal with the federal government to purchase IndyMac, one of the largest mortgage lenders in the country, after it collapsed spectacularly under the weight of subprime mortgage defaults. IndyMac was renamed OneWest, and Mnuchin’s new bank set about foreclosing on thousands of homeowners.

According to the California Reinvestment Coalition, OneWest has foreclosed on over 36,000 families in California alone, and “2/3 of these foreclosures occurred in majority minority communities.” As David Dayen wrote for The Nation, “it’s not hyperbole to say that every one of these foreclosures were fraudulent.” OneWest moved aggressively to foreclose on properties and was one of several financial institutions that fabricated and fraudulently backdated documents needed to establish their standing to foreclose. In 2011 OneWest was hit with a consent order from the Office of Thrift Supervision documenting the various “deficiencies and unsafe or unsound practices” the bank had engaged in while foreclosing on people’s homes.

All these foreclosures gave rise to a series of media reports about homeowners who were badly mistreated by OneWest. An elderly California husband and wife tried desperately to work with the bank to modify the terms of their loan and were told by a OneWest vice president that they would get a 60-day extension to work things out. Their home was sold the following day without their knowledge. A Minnesota woman who was in the process of renegotiating her OneWest loan came home from work one day to find the locks on her doors had been changed. A subsidiary of OneWest moved to foreclose on an elderly Florida woman’s home after a payment error of 27 cents, Politico reported. In 2012, a California couple won a lawsuit against OneWest after the homeowners alleged that it had engaged in dual-tracking: One division of the bank slow-walked their loan modification while another barreled ahead on foreclosure proceedings.

One person who has come out way ahead in all this is Mnuchin. He and his partners scooped up more than $1.5 billion in profits after their first year of One West ownership.

To nominate someone like this for a high-level Cabinet post is to invite a populist counterattack, and already we’re seeing Democrats from the party’s progressive wing hitting Mnuchin with some sharp elbows. Sen. Sherrod Brown of Ohio has observed that Mnuchin’s nomination “isn’t draining the swamp — it’s stocking it with alligators.” Sen. Elizabeth Warren of Massachusetts has called Mnuchin the “Forrest Gump of the financial crisis” due to his uncanny knack for being at the center of all the worst Wall Street abuses.

The going theory about what happened in the 2016 election is that it represented a backlash among the lumpenproletariat against the political and financial elites who game the system for their own benefit. By picking Mnuchin as the nation's leading financial executive, Trump has elevated a little-known avatar of this corruption. Democrats have an easy and compelling case to make that Mnuchin represents the worst of predatory finance and that his nomination to run the Treasury undermines everything that Donald Trump claimed to stand for on the campaign trail.