Mike Pence abandons Reaganomics: "The free market has been sorting it out and America’s been losing"

In an interview with The New York Times, the leaders of the GOP reveal a shift away from free-market capitalism 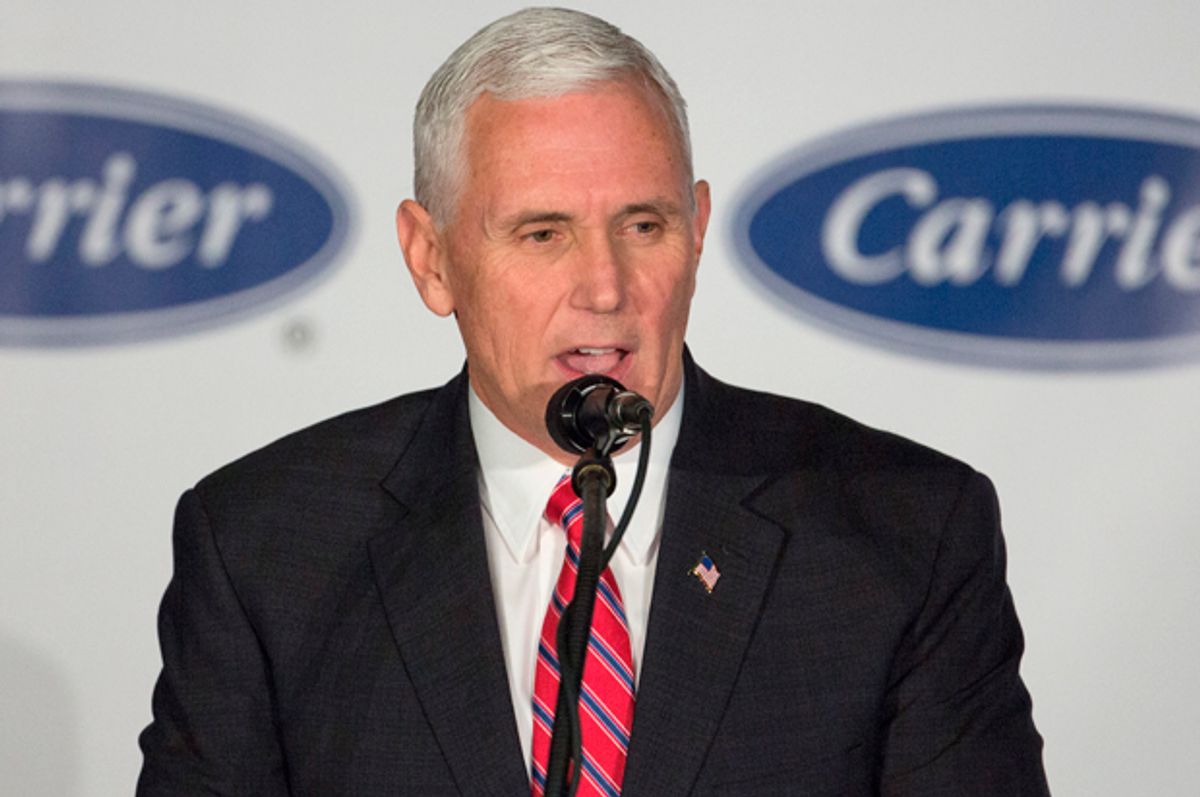 After he and President-elect Donald Trump secured an arrangement with Carrier to preserve a manufacturing plant in the governor’s home state, Pence justified the deal in an interview with the New York Times, telling reporters, “The free market has been sorting it out and America’s been losing.”

In many ways, Trump's campaign was antithetical to the principles and core values of the Republican Party. His economic populism resonated with voters in the Rust Belt, but it never meshed with the politics of House Speaker Paul Ryan, whose committed conservatism obstructed any overreach from President Barack Obama. As Time's economics reporter Nelson Schwartz put it: "If Barack Obama had tried the same maneuver, he’d probably have drawn criticism for intervening in the free market."

But the Republican Party is no longer the party of Paul Ryan. It is the party of Trump. And Trump has sent a message to corporate America: “I don’t want them moving out of the country without consequences,” he told the Times.

Before the Carrier announcement, Trump's economic adviser Stephen Moore reportedly told a group of top Republicans that they should no longer think of themselves as belonging to the conservative party of Ronald Reagan, a source told The Hill. Moore gave the Republican lawmakers a dose of reality, informing them they now belong to Trump’s populist working-class party.

Ryan, for his part, expressed cautious approval of the deal. “I don’t know the details of the Carrier arrangement … but I think it’s pretty darn good that people are keeping their jobs in Indiana instead of going to Mexico,” he said at a Thursday conference.

Republicans and Democrats alike have noted that the Carried deal may not be as pro-labor as Trump has made it out to be. Reports indicated Carrier received $7 million in incentives from the state of Indiana to keep the jobs stateside.

In a Washington Post op-ed, Senator Bernie Sanders wrote: “He has signaled to every corporation in America that they can threaten to offshore jobs in exchange for business-friendly tax benefits and incentives.”

Rep. Justin Amash, R-Michigan, took to Twitter to voice his disapproval of the deal:

More corporate welfare and cronyism. Equal protection is denied when one company receives favors at the expense of everyone else in Indiana. https://t.co/gPVLLyYQOS

Proponents of Trump's intervention point to the 1,000 Americans who get to keep their jobs as a result of the deal. Whether Trump has truly abandoned free-market Republicanism remains to be seen. Trump pledged to drain the swamp in Washington, yet billionaires and Goldman Sachs alum seem to have the most prominent voices in the White House.