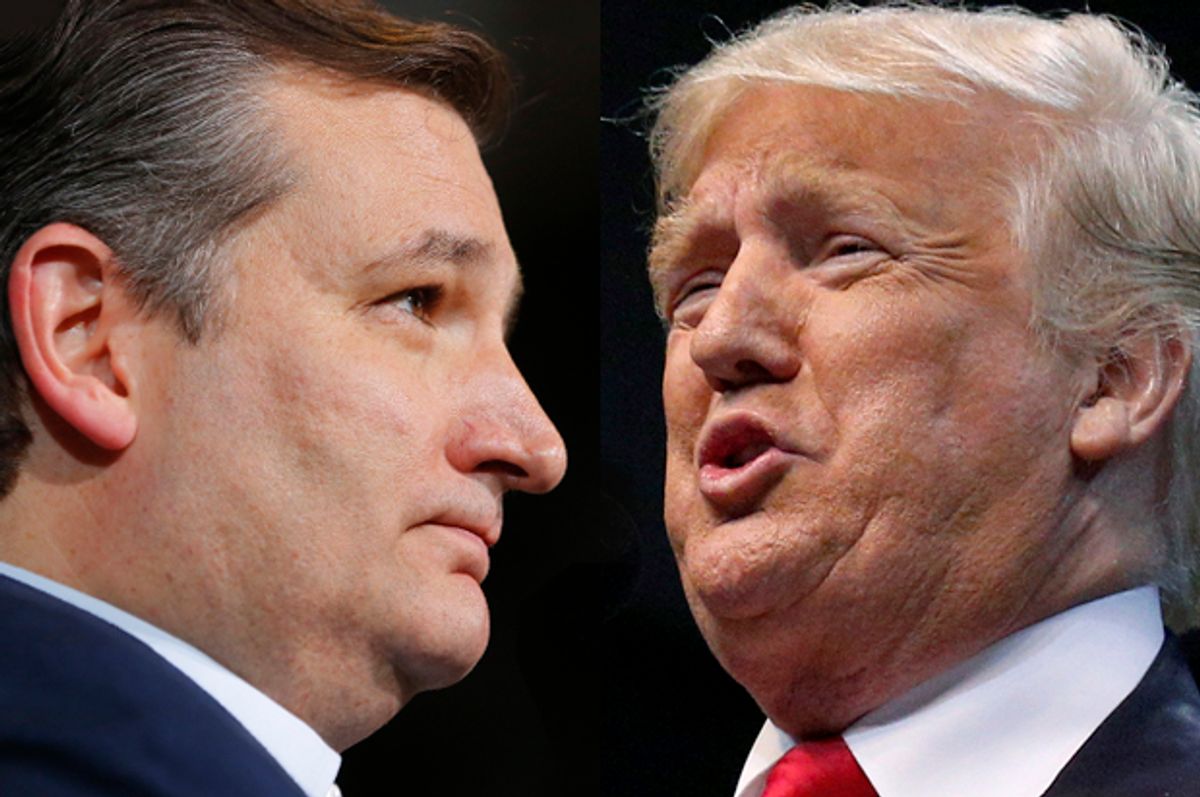 Democrat Hillary Clinton's campaign has been righteously pilloried for its so-called piped piper strategy of elevating the unorthodox campaign of Donald Trump in a misguided effort to later secure an assumed weak rival. Donald Trump's rise was also aided by the GOP, which originally offered the blustery businessman a platform, and Texas Sen. Ted Cruz, who begged for a bromance.

Before Trump claimed that Cruz's father helped plot the assassination of John F. Kennedy and harassed Cruz's wife, Heidi, the Republican presidential primary was perhaps most notable for the peculiar lack of rivalry between the two leading contenders.

“Senator Cruz has been so nice to me, I can’t hit him,” Trump said while campaigning in the fall of 2015.

For his part, Cruz has made it no secret that he was just playing the long game for Trump’s supporters. “It is my hope that the voters who are currently supporting Donald Trump and every other one of the Republican candidates in time will come to support us,” Cruz told conservatives gathered for a conference organized by Erick Erickson’s Red State in August of that year.

During a panel discussion about the presidential election sponsored by Harvard Institute of Politics on Wednesday, former Trump campaign manager Corey Lewandowski revealed just how far Cruz went in his ambitions to win the White House at all costs.

Lewandowski claimed that shortly after the first 2016 primary contest — the Iowa caucuses, which Ted Cruz won — he got a phone call in which Cruz’s campaign manager, Jeff Roe, gave him advice on how to win New Hampshire.

“After Iowa, someone at this table, Jeff Roe, called me. He said, ‘You know, in New Hampshire your numbers are dropping like a rock. John Kasich is gonna catch you if you don’t fundamentally change the way you’re running your campaign and go out and be positive.” Lewandowski recalled of Roe’s phone call, as reported by Politico. “Because it used to be that when people were leaving us they were going to Cruz but Cruz wasn’t playing in New Hampshire.”

At the traditional post-election event at Harvard, Lewandowski made clear that the information from the Cruz campaign was invaluable because the Trump team was not even conducting internal polling at that time.

Roe confirmed to the Los Angeles Times that he called Lewandowski to inform him that their internal polls showed Trump losing ground in the key state after he aggressively attacked the other GOP candidates.

“We needed Trump” to defeat other candidates that could have had a chance in the Granite State, Roe told the Times.

Trump went on to handily win the state with 35 percent of the vote in a still-crowded field.

Lewandowski told the panel that “Donald Trump changed his strategy on the Thursday before the Tuesday election in New Hampshire to go out and be positive for the rest of that cycle and then we won fairly large in a small state."

He added: “We knew we had to win New Hampshire. Or I did at least for my job.”