George Mitchell rejects "apartheid" label for Israeli-Palestinian conflict: "It is a misapplication of the word" 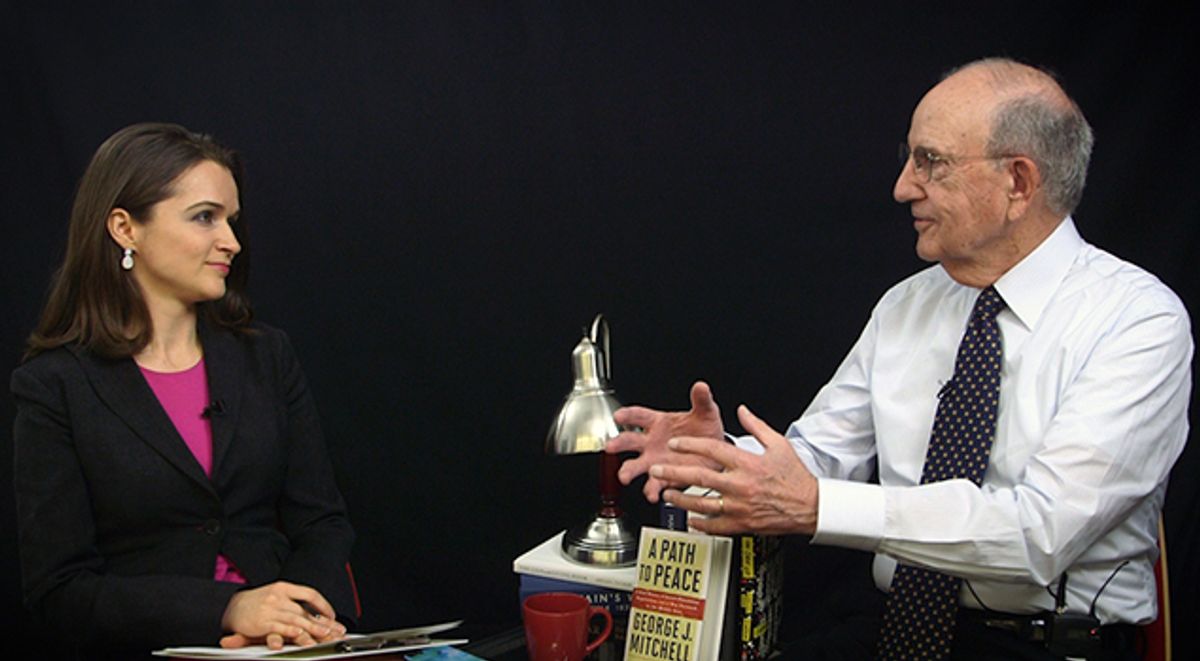 Distinguished diplomat George Mitchell, a former Democratic Majority Leader who also brokered peace in Northern Ireland and served as a special envoy to the Middle East for President Obama, convincingly argues in his new book, "A Path To Peace: A Brief History of Israeli-Palestinian Negotiations and a Way Forward in the Middle East," that the comparison liberals often make between the Israeli-Palestinian conflict and apartheid South Africa is flawed.

“I think it is a misapplication of the word,” Mitchell said in a Salon Talks interview about the book. “Although it could occur I don’t think it’s the case now. The Palestinians don’t want to live in an Israeli state. They want their own state. Apartheid suggests a single state with two classes. I think what they want is an independent sovereign state of their own. And that is the challenge that I think we need to address."

"One of the difficulties in this whole area of conflict not unique to Israelis and Palestinians is that there is widespread and deep mistrust, hostility, demonization of those who are different, and that leads to inflammatory rhetoric which reinforces all of the hostilities and in fact deepens them. So I think a good step forward — at least for me — is to decline to use inflammatory words. Particularly when they don’t apply to the situation,” he said.

Instead of digging in their heels on overheated identity politics, liberals should see how throwing around divisive and racially tinged language like “apartheid” raises the temperature without shedding light. A test case is whether the anti-Israel language from Rep. Keith Ellison will prevent him from manning the helm of the Democratic National Committee.

By selecting Ellison, Democrats will signal that they still don’t seem to understand why so many millions of Americans don’t buy into the anti-democratic ethos embraced by so many Arab countries, and why so many Americans like Mitchell want to lower the temperature on the rhetoric instead of escalating it with inaccurate and inflammatory labels like “apartheid.”

Of course, Trump himself ran a campaign full of his own incendiary rhetoric, and Mitchell said he hopes that Trump’s rhetoric, which has already softened, will continue to cool once Trump enters the White House.

“I think he recognizes clearly there is a difference between campaigning for president and being president,” Mitchell said. “The words in a campaign are used for the purpose of getting votes. Most people recognize that not necessarily will every word be adhered to once they get in office. Once you are president every word matters. The president of the United States, by virtue of the dominant position of the U.S. in the world — the largest economy, most powerful military, increasingly cultural and economic power around the world, the words of a president resonate. They are heard throughout the world. So I hope there will be less use of inflammatory language.”

The Trump-Pence administration is solidly pro-Israel, which means they are pro-democracy. They support a country that actually embraces gay rights rather than represses them. They support a country that offers jobs and economic opportunities to Palestinians, no matter what the misguided activists, particularly those floating in their bubbles of privilege on American college campuses, feel in their misguided campaigns of Boycott, Divest and Sanction (BDS) Israeli companies. The BDS movement stunts the Palestinian economy even as it has negligible impact on Israel's. Yet the liberal anti-Israel crowd ignores these realities, driven by a self-righteous indignation that bafflingly supports theocratic rulers with no respect for basic human rights, especially women’s rights.

Mitchell says he thinks it's encouraging that Trump shows a keen interest in trying to resolve the Israeli-Palestinian conflict.

"I think it is important that whoever is president of the U.S. take an interest in it, and undertake an initiative to try and resolve it. Obviously the prospect is difficult. President-elect Trump will be the 13th president — whoever he names secretary of state will be the 21st secretary of state — [along with] innumerable envoys who have tried to get an agreement between Israelis and Palestinians. None succeeded — so far," Mitchell told Salon. "But I believe an agreement between Israelis and Palestinians based on the two-state solution — that is, a secure Israel in which people do not live in fear and anxiety, and an independent, non-militarized Palestinian state, [living] side by side in peace, is the best outcome for both.”

In "A Path to Peace," Mitchell describes how President George W. Bush made a persuasive speech in Jerusalem in January 2008, basically telling Israelis that they have a very successful state but their people live in fear and anxiety, and what they want is security, and the only way they are going to get security is if the Palestinians get an independent state.

“To the Palestinians he said — you want a state, and we the U.S. support your effort for a state,” Mitchell said. “But you are not going to get a state until the people of Israel have reasonable and sustainable security. So President Bush made the argument that each of you should not only be invested in your success, but in the others' success because that is going to be the only way you can get what you want. I thought that was a persuasive argument then; I still think it is. Justifiably, efforts have been made to reach it for many years and they haven’t succeeded. But I still think it remains to be the most viable option.”

Mitchell said he doubts that Trump will fulfill his stated desire to move the U.S. embassy from Tel Aviv to Jerusalem, a symbolic gesture that many observers would interpret as an aggressively pro-Israel move.

“Every presidential candidate in virtually both parties has made that promise during the campaign,” Mitchell pointed out. “Then once in office each has said — well, maybe not now. Maybe later. And I think that is likely to happen in this case. It’s possible Mr. Trump or some future president will will make the decision."

"One of the problems is that Jerusalem is perhaps the most difficult of all of the issues that the parties have to resolve," he continued. "And it is the one issue in which the Palestinians don’t have a free hand to negotiate. They can decide borders with Israel. They can decide water rights, they can decide transportation issues. But Jerusalem is more than a Palestinian issue. It’s a Muslim issue. And Saudi Arabia, Jordan, Morocco, and the nearly 1.7 billion Muslims around the world that have a deep interest and stake in what happens in Jerusalem. Just as do all Israelis and others around the world. I think it is best to leave it to negotiation of the parties. I do favor a situation where the Palestinians have a state with a capital in East Jerusalem — that was President Clinton’s proposal, that was President Bush’s proposal. That’s been American policy for a long time.”

As a former Jerusalem Post correspondent with some Middle East experience, generally I found the advice in "A Path to Peace" to be fairly conventional, and Mitchell conceded it was that way by design.

“I do think the advice is conventional,” he told me. “But that does not make it wrong. The reality is the positions taken by the United States over that past several decades through Republican and Democratic presidents are the best for the United States — that is the number one criteria. And we believe best for Israelis and Palestinians. That they can best achieve their directive by negotiating to reach a two-state solution.”

Mitchell likened the Israeli-Palestinian conflict to his experience in Ireland, a conflict which he describes in his book as far less entrenched and complex.

“When I went to Northern Ireland I confronted exactly the same question that you have just asked,” he said. “Many, many peace negotiations had been held before. And they had all failed. Why do you think this is any different? And my answer was we have to try to get the parties together in a way they had not been previously listening to each other. Considering the other’s point of view. Trying to determine what is their self-interest. And when I do that I believe they come to the conclusion that as difficult as it was politically, it was extremely difficult for people who had been in conflict for decades to reach an agreement -- it was better than the alternative. And I still think that is the case in the Middle East with respect to the two-state solution.”