It's a Ho-Ho-Humblebrag holiday: The annual debate over kids and gift-giving rears its ugly head 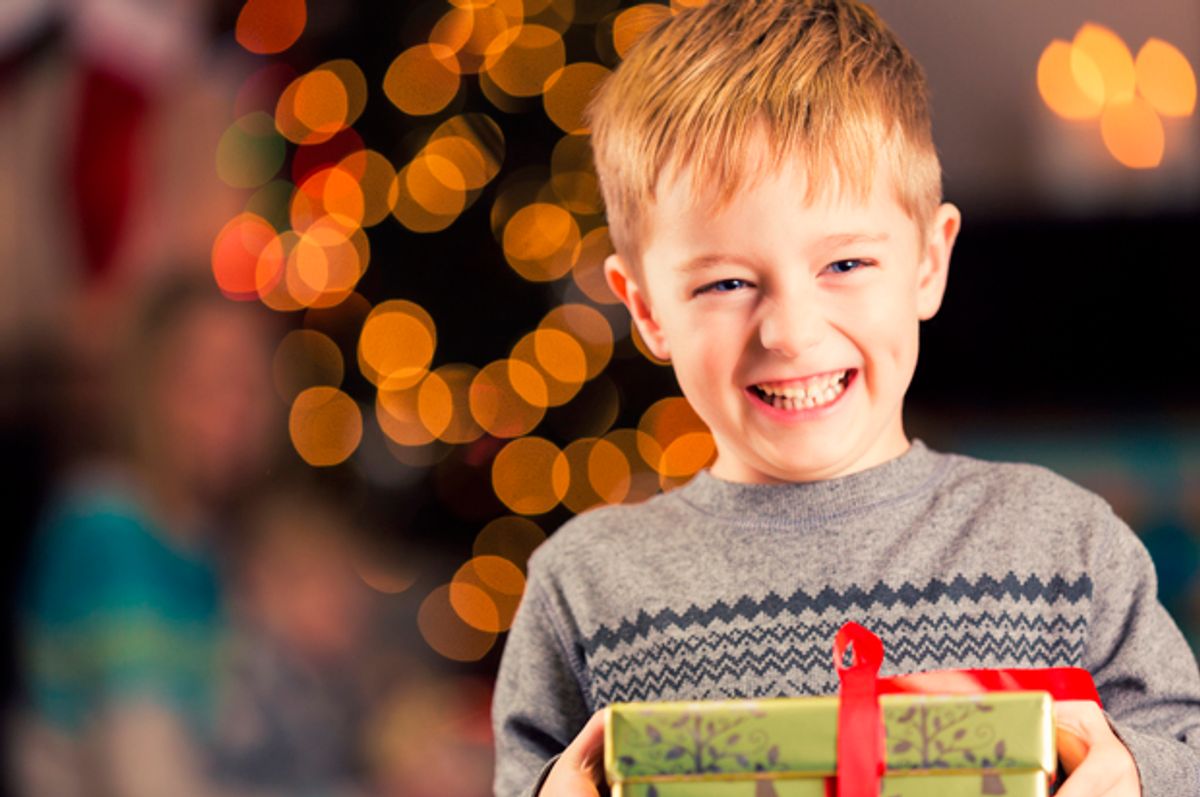 My son’s first Christmas after my divorce I went a little overboard. As a child of divorced parents myself, I’d lived through both parents competing to outdo the other and buy their children’s affection. I’d promised myself that I wouldn’t do the same thing. But, as I snapped photos of the wrapping paper that littered the living room floor, the presents covering both the couch and coffee table, and my son seated cross-legged in the midst of it all, I had to admit it. I’d overdone it.

The holidays are upon us once more and so too are numerous parenting articles debating how many presents is the right amount. Parents worry, or are told to worry, that giving too many presents subverts the meaning of the season. Will their children learn about gratitude or generosity, or greed and materialism? Is one gift per night enough during Hanukkah, or should you give more, or none at all? At the same time, you can’t turn on the television without seeing images of children rushing downstairs to a living room brimming with wrapped packaged under an artfully decorated tree.

Some parents limit the number of presents their children receive. “I want my children to learn gratitude and to appreciate what they have,” they sanctimoniously announce during the church kaffeeklatsch, or during drop-off at school, or to news outlets. I question this approach. Are these parents teaching their children gratitude, or self-righteousness? If their choice is about teaching the reason for the season, or taking a stand against materialism, then why is it necessary to announce it?

Parents who state proudly that they’re going to give experiences rather than “stuff” also ignore the inherent privilege in this statement: Experiences often cost more, and require a certain amount of access. Taking your child to “The Nutcracker” or to a children’s museum means these amenities and venues exist in your community to begin with. Destination vacations are far more expensive than four or five presents under the tree.

Notice the implications in these statements. “We’re only giving our kids three presents each.” That only says a lot, namely that they could buy more but chose not to. “We choose to give experiences instead” implies that the parents have the option of buying presents in the first place. It’s a subtle form of bragging, and a bit rude to parents who might want to give their kids more but can truly only afford three presents, or for whom a theme park vacation is well out of reach. They may be talking about the issue in front of a parent who had to go through her house to see what she could sell on Craigslist to pay for this year’s presents, or to someone who just went through a lean period but is safely out of it and excited to give their kids a bigger Christmas this year.

The judgment implicit in these boasts criticizes parents who lavish their children with gifts, often implying that they can’t truly afford them. It also demonstrates a lack of awareness, perhaps stemming from privilege, of how most middle- to lower-income people I know shop for the season. Christmas shopping happens all year long in my house. When I see a toy on sale and I’m reasonably sure he’ll still like it in three months, into the basket it goes. A friend’s employer sponsors a program where he can buy presents in December and have them deducted from his paychecks throughout the rest of the year. Some parents use credit cards and leverage cash back, gift cards and other programs. One year I put all my normal yearly spending on one credit card to "buy" half my gifts with points and didn’t spend any money at all. How many presents someone’s children receive, and how they’re paid for, is no one else’s business.

The definition of "too many" is hard to pin down. Children are different, and teaching gratitude goes beyond one month a year. While they may count the number of presents in order to compare them to their siblings in the never-ending quest for fairness, give it two weeks and they won’t remember the number. Kids under 2 really will just play with the boxes. While you may remember one or two big, important presents like your first bike or gaming system, I bet you don’t remember the number of presents you got that year. When deciding on which presents to buy it would serve parents better to look to their own motives when making the list.

Is it about competing with an ex or the neighbors or is it about joy? The joy in your child’s face when they open the last big present. Incoherent babbling, jumping up and down, and skinny little arms thrown around your neck in a stranglehold hug. As adults, we rarely exhibit such unrestrained emotions. Watching my child’s reaction to his gifts has been one of the purest moments I’ve had as an adult. And, if all those gold-painted signs in the store are right, joy does have something to do with the season. Maybe, to that extent, it is about the parents. But not in a selfish way, perhaps just a reminder of why we had children in the first place.

Buying a present for someone else, if it’s the right present, can be a selfless act. "I thought about your interests, your hobbies, and what you’d love," it can say. I took the time to drive to the mall, or click "buy" online and have it shipped. It only takes on a selfish connotation if we expect something in return, to show off, or humblebrag about how few gifts we bought our kids that year. The reverse is also true — the generic lotion, the gift card, or an ill-fitting garment from your husband can really sting.

If you, as a parent, are truly concerned about teaching your child generosity during the holiday season I’d suggest worrying less about the number of presents under the tree and more about teaching your kids to say "please" and "thank you." Find volunteer opportunities you can do together as a family. Involve them in shopping for their siblings or grandparents. Last year my son spent 20 minutes in Target agonizing over a gift for the cat, and was so excited to give it to her that he made her "open" her present first. Teach them about money management by giving them a budget for those gifts. Have them spend part of Christmas or the last day of Hanukkah writing thank-you notes. There are a number of ways to teach your kids good values that don’t stray into sanctimonious self-righteousness or judging other parents.

For the record, I have no idea how many gifts my ex gave my son that first year. This year he won’t be getting as many, but that’s just because I’m practical. He’s been asking for the same LEGO set for six months now and I know that once he opens it he won’t even look at his other gifts, so I see no reason to buy a ton of them. He’ll spend the next two hours assembling his kit while I read on the couch. The number of presents under our tree doesn’t matter nearly as much to me as the joy that they bring.