Sorry to burst your bubble, but don't all Americans live in their own little worlds? 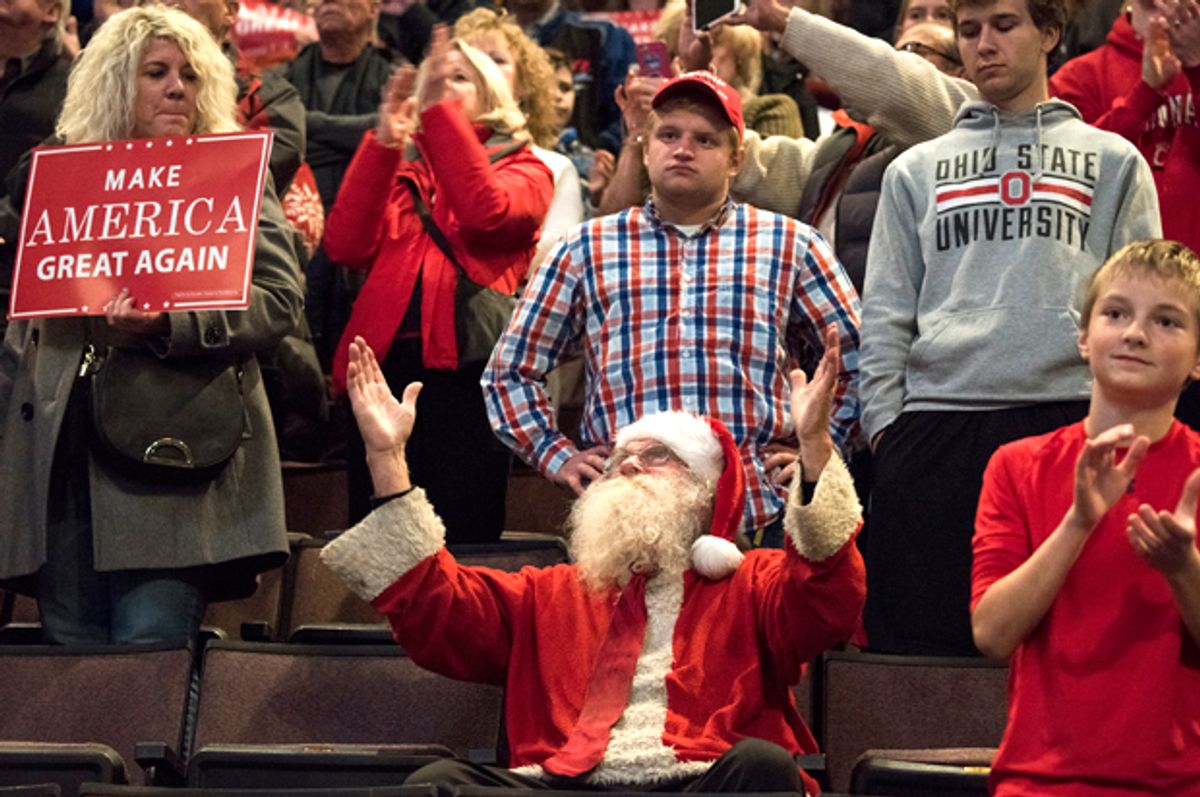 CINCINNATI, OH - DECEMBER 01: Guests listen to President-elect Donald Trump speak at U.S. Bank Arena on December 1, 2016 in Cincinnati, Ohio. Trump took time off from selecting the cabinet for his incoming administration to celebrate his victory in the general election. (Photo by Ty Wright/Getty Images) (Getty Images)
--

The surreal election of Donald Trump to the presidency has given loud amplification to several boring bromides. There is an endless loop of maudlin reflections on the plight of the “white working class.” “Elites” and “elitism” have become central to the cacophony, along with the spooky but largely meaningless word “establishment.” Particularly irritating is the new version of the old admonition against liberals to “get out of the bubble.”

It is likely true that many liberals live insulated lives of cultural and intellectual isolation, but it is equally true of conservatives. The construction of a bubble around an individuated life is part of human nature, but with typical idiocy and hypocrisy, American culture has issued a one-way, exclusive indictment against isolation for liberals and no one else. To condemn people of progressive politics for insular thinking and living is the equivalent to prosecuting a petty shoplifter for theft, while ignoring the bank robbery spree of a modern-day John Dillinger. Liberals, by any criteria, are the mildest offenders.

When was the last time any mainstream commentator suggested that a rural, white Christian conservative Sunday School teacher escape her bubble and befriend a group of black lesbians? Can anyone recall ridicule of a right-wing, suburban housepainter who believes God watches his every brushstroke for not attending a public lecture from an award-winning evolutionary biologist?

The absence of criticism against the conservative bubble, which is undeniably smaller and tighter that the liberal bubble, demonstrates that American culture has condescended to the conservative with, to resurrect an old George W. Bush chestnut, “the soft bigotry of low expectations.”

No one reasonable really expects right-wing Christian conservatives to escape their own cocoons. People who applaud when a political candidate proposes banning Muslims from entering the country can know nothing about Islam. Voters can support someone who called Mexican immigrants “rapists” who are “bringing drugs” without ever knowingly meeting a Latino who emigrated from Mexico. This brand of conservative bubble of bigotry and ignorance actually damages the country and results in destructive public policy.

Insulated progressives might adopt snobbery when considering the daily routine of “hillbillies” and “rednecks,” but they actively support political leaders who aim to alleviate poverty. The coating of the conservative bubble is often so dense that it prevents inhabitants from accurately identifying their own interests.

One of the funny-if-it-weren’t-so-sad ironies of America’s political discourse is that many white Republicans display greater outrage when NFL players refuse to stand for the national anthem as a silent protest against police brutality than they do when unarmed black teenagers are shot down in the street. A fun bubble-bursting rhetorical technique for anyone frustrated by a white Republican ranting about the evils of the Black Lives Matter movement is to reply with the inquiry, “Are you black? You look white, but you seem to have some expertise on the issue of black experiences with law enforcement.” I have not yet heard any exhortations against white America for failure to bust out of its racial bubble.

While on the subject of race, it is useful to examine the modern master of critical race theory and sociological sophistication, Charles Murray. His greatest hit is his advancement of the bell curve theory — the idea that people of African ancestry are predisposed to having lower IQs than whites. An updated version of his quiz for Americans to learn whether they “live in a bubble," from his 2012 book "Coming Apart: The State of White America 1960-2010," has been making the social media rounds in the wake of the election.

A few of the questions are actually helpful, such as “Have you ever lived for at least a year at a family income that was near or below the poverty line?” Most of the questions, however, expose a political bias. For example: “Have you ever worked a job that caused something to hurt at the end of the day?” The static categorization likely does not include teacher and nurse jobs. Both professions might cause a person’s feet to hurt at the shift’s conclusion but also draw middle-class salaries. A nurse or educator can work in rural Alabama or the Chicago Loop. No matter what the Fox News binge viewer might argue, a middle school teacher or hospital nurse, even in New York or Los Angeles, is not an insulated “coastal elite.”

The quiz also asks participants if they “know who Jimmie Johnson is,” referring to the NASCAR driver. How many Americans know who Toni Morrison is? Why is knowledge of NASCAR but not African-American literature proof of a bubbled existence?

“How many times in the last year have you eaten at one of the following restaurant chains?” Murray demands to know from readers before listing Applebee’s, Denny’s and other corporate all-American-fare eateries. I rarely eat at any of these chains, but I do enjoy dining at a Mexican restaurant with immigrant ownership in my hometown. My wife and I also like the food at a Middle Eastern restaurant in a neighboring town. We live in northern Indiana. Murray seems to believe that culinary variety does not exist in middle America and that anyone who prefers an entrée other than the cheeseburger at Chili’s is an out-of-touch elitist.

The entire framework of the “bubble” conversation reinforces, unintentionally or not, the bias that the “real America” is white, rural and Christian. White Christian conservatives, according to what appears is the dominant assumption, have no bubble to escape because they have ownership over the social norms and cultural conventions of American identity. The atheistic, lesbian nurse in Chicago or the Muslim schoolteacher in Los Angeles should not have the expectation that the “real America” will make accommodations to understand her, but she does toil under the pressure to appreciate the “real America,” even as mainstream discourse implies that she is not part of that parochial precinct.

The same media that implicitly affirms the racial and religious tribalism of white, Christian America provides working people in rural regions adequate ammunition for anger. While print media outlets have covered the catastrophic wildfire in Tennessee, television media channels have demonstrated a callous indifference. It barely rates for seconds of coverage, while commentators ramble insipidly about Donald Trump’s Twitter feed or Kayne West’s hospitalization. A comparison of reportage on the wildfires, which have already destroyed countless homes and killed five people, with the weeklong obsession that an ordinary blizzard in New York provokes should produce a combination of laughter and tears.

It is difficult to deny that the mainstream media projects a cultural hierarchy whereby people in New York, Washington and Los Angeles occupy the upper levels, while anyone outside the most powerful generators of economic and political activity are less important. Even so, the story of America’s cultural divide is much more complex than “elite” snobbery and condescension. White Christian conservatives, especially outside major metropolitan areas, occupy their own bubbles and from the distorted view of their self-imposed ignorance mistake the media as representative of all liberals and adopt the posture of persecution. Their false sense of oppression — visible every December with protests against the “war on Christmas” — inspires them to act defensively against anything that strikes them as “un-American.”

Just as many right-wing Christians believe they are soldiers in a cosmic war between God and the devil over the fate of the universe, they also believe that they are the last line of defense against the destruction of the “real America.” This illusion requires insulated thinking and living. The reality is that the average liberal city resident who, like anyone else, is working to make ends meet in the pursuit of happiness does not give much thought to the average Republican voter. Everyone simply carries out their own lives within the unavoidable bubble of human nature and self-interest.

What has traditionally broken through that bubble is the old notion of the common interest and public good, which is currently out of style as those within the “Make America great again” nostalgia bubble enjoy their ugly victory.