With Disney’s "Moana," Hollywood almost gets it right: Indigenous people weigh in 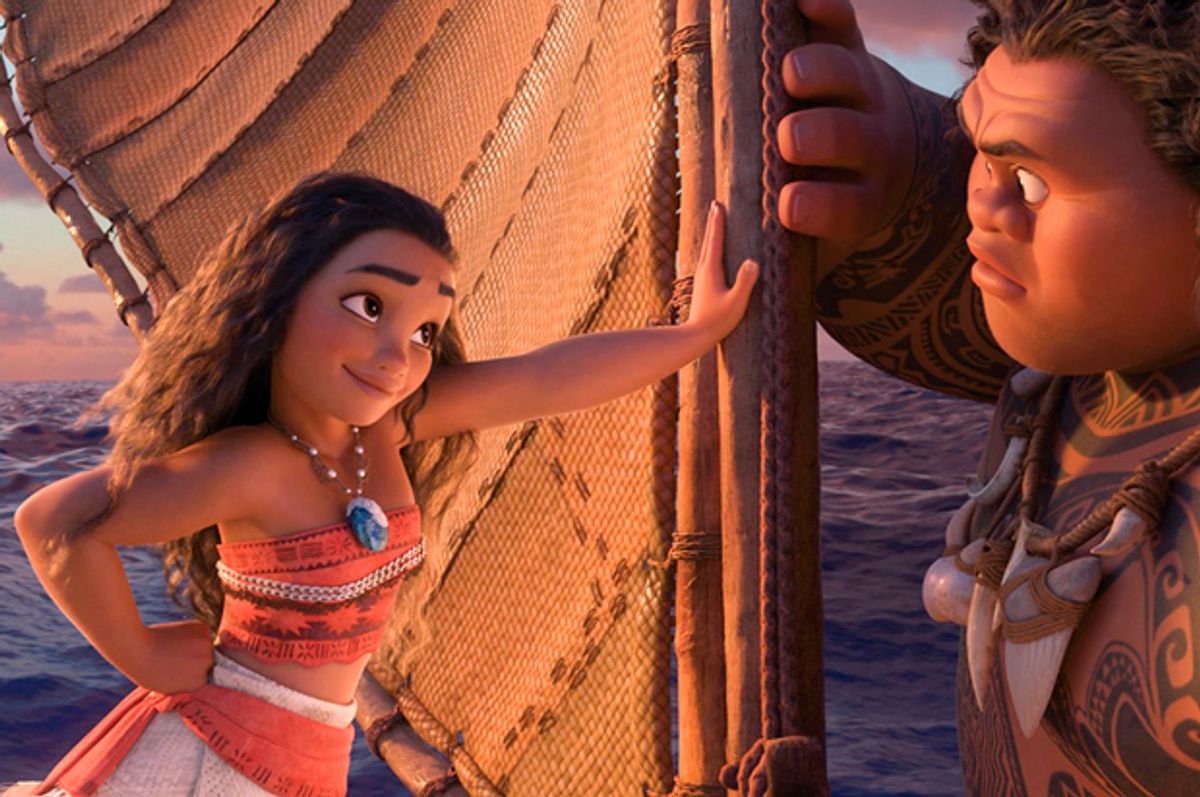 This Thanksgiving the receipts for the opening weekend of the new Disney film "Moana" rocketed to $82 million domestically and $99 million globally. At this rate the new film is poised to crush “Frozen” and “Big Hero 6.”

What's more, after only a week in business, it is already winning critical acclaim and beginning to rack up award nominations. Maybe most encouraging of all, Native Americans and other indigenous people, are loving "Moana," which means “ocean” and tells the story of a young Pacific Islander chief’s daughter, a bold, strong and independent teen who sets sail to save her people.

I took my children, who are of mixed ethnicity — part Native American, African-American and white — to see "Moana" last weekend, and I lamented that they would never understand how much progress this represents for the portrayal of indigenous people in mass media. True, they’re little kids, and they should be expected to watch an animated film only with the limited scope and wonder of all children. but the experience impelled me to write about the swelling pride I felt during this film and how my late mother would have felt about it.

She passed away nine years ago today and was a fierce advocate for equal and civil rights and outspoken about the horrible racist stereotypes of Native Americans, black people and other brown folks specifically in Disney films. She might have actually tipped her hat to this one, as I did. Here’s why.

It’s easy to see why most are loving on the film. This is the first time that a female Pacific Islander is the principal character of a major Disney animation film. She doesn’t need a man. She sails her own boat. The ocean, which is a character in the film, loves and propels her.

Many Pacific Islanders have praised "Moana" across social media, with tweets expressing joy and optimism about the character and the film. The young indigenous Hawaiian actress who voiced the character, Auli’i Cravalho, knows she has added responsibility portraying the first Disney person of color from the Pacific.

“I carry, of course, such a big responsibility with the Polynesian community and I love it. I really do,” 16-year-old Cravalho told People magazine recently. “It warms my heart every time I think about it.”

Closer to home, Natahne Dennis, a member of the Shinnecock Indian Nation, took her young daughter to see the film last weekend. She wrote on Facebook, “I was watery-eyed through half of it. . . . It's all about not forgetting who you are and where you come from . . . keeping with your traditions, listening to your elders and respecting the power of all our elements . . . very relative to what's happening right now.”

Though it's a film made for children, "Moana" has a cultural and social relevance for adults as well. I cried, too, at the soaring songs, and their lyrics by Lin-Manuel Miranda, which rang out about freedom and the import of knowing where you come from.

What Disney got right was its portrayal of a strong, teenage female character of color — again, an indigenous person — without a love interest. It is the first Disney film in which the heroine, a bona fide Disney princess though she is, has no male suitor and she's not interested in finding one. Moana is bright, resourceful, strong and adventurous, making decisions from the heart and based on her heritage that she feels will benefit her people and save their homeland from destruction at the hands of a folkloric demon.

Disney didn’t get it all right, however. Critics observe the corporate animation house stole brown peoples’ cultural mores and identity to make a buck, and didn’t fully consult them on content all the way through. The critics aren’t wrong, but what they expect is not realistic: Making big studio features is a business proposition; crafting a documentary that explores true culture and origins typically is not.

Cultural appropriation is a common complaint about the media and not surprising here — and disappointing, as "Moana" is overall an uplifting, beautiful film. But the film's achievements are not enough for some to cite progress toward more accurate, less-stereotypical portrayal of other cultures in film. In Indian Country Today, Vicente Diaz wrote, “A small but growing movement of Pacific Islanders . . . are expressing outcry, mostly in social media.” Diaz said protesters decry the “company’s trafficking on indigenous cultural heritage.”

As a Native American and a member of the media who has worked in advertising, broadcasting and web content creation over the past 20 years, I understand the confluence of imagery, cost and influence that goes into making a successful brand. Those who are angry at Disney managers' trading on cultures not their own fail to acknowledge or accept the way business is done. We may not like it, but understanding it gives perspective.

That said, it is a valid argument to demand consistent and responsible input from respected elders and historians from the culture being portrayed. And if you want change, sometimes you have to accept progress when it comes, endorse it but ask for more — and then observe.

Native American scholars including Kelsey Leonard, a Harvard and Oxford educated Shinnecock tribal member, have urged caution when labeling a film an “accurate portrayal” of indigenous people “especially if we are not from, as in the case of ‘Moana,’" a Pacific Island nation, as Leonard put it.

“If you do not know the oral history, are not from those islands, have never visited those places, do not understand the vast diversity of languages and peoples, then extreme caution should be used in making sweeping claims about this movie," Leonard said. "If they made a movie about Shinnecocks, I wouldn't want a Navajo telling me if it was an "accurate portrayal."

Disney has maintained that everybody involved in the production of the picture did their level best to make a responsible film that honors Pacific Island culture, traditions and history. Early reports that director and New Zealander Taika Waititi was consulted through the entire film, were not accurate.

Indeed the voice cast is almost fully comprised of actors with Pacific Island heritage and Waititi apparently did write an early draft of the script for “Moana.” But the script was ultimately rewritten by Jared Bush, a non-Pacific Islander. “It continues to be disappointing that when people are called as advisory cultural and artistic consultants on projects that their work is not respected all the way through," Courtney Leonard, another Shinnecock woman and sister of Kelsey Leonard, wrote. "It's also a lot of responsibility when you come from that culture to please everyone under the auspices and pretenses that are what Disney is.”

Diaz wrote in Indian Country Today, "Any altruism associated with this latest commercial ad-venture will always be trumped by the proverbial bottom line, but more depressingly, by an enduring colonial legacy in the Pacific islands that is further animated in the 21st Century by neoliberal and postcolonial desires for selling and consuming native culture of a very specific type.”

As Disney often does, the script is populated by characters that are a mash-up of Pacific Island cultures, and therefore are not as accurate in their representation as they could be. Disney made some early gaffes in the associated merchandise, like a tattooed skin suit of the Polynesian demigod Maui featured in the film (oh no!) and plastic toy figures that turn a Pele, the Hawaiian fire goddess responsible for volcanoes, lightening and wind respectfully referred by those in the culture as Madame Pele, into the lava witch seen in the film (ugh!).

Both products have been pulled from stores. Copy on the tattoo skin suit packaging, according to Variety, had cheerily read, “Your little one will set off on adventures in this Maui costume featuring the demigod’s signature tattoos, rope necklace, and island-style skirt. Plus, padded arms and legs for mighty stature!”

So, yeah, Disney thought it would be fun for your kid to wear a replica suit of a person’s skin. I would have liked to have joined the marketing meeting where that was approved.

Disney briefly hung its head, telling Variety in September when the toys and costumes were released, “The team behind ‘Moana’ has taken great care to respect the cultures of the Pacific Islands that inspired the film, and we regret that the Maui costume has offended some. We sincerely apologize and are pulling the costume from our website and stores.”

The animation, music and storyline, in Disney fashion, are largely airtight in quality — almost magical. And in spite of any controversy, the film represents progress in the way indigenous people are portrayed by big media. "Moana" represents huge strides from 1989’s crab Sebastian in "The Little Mermaid," who sounded Jamaican and sang to the princess Ariel that life "under the sea" is better because no one has to have a job underwater. And from the way-back machine, there were the 1941 crows in "Dumbo," who step 'n' fetched it, talked jive and were unintelligent. The list goes on, from "Uncle Remus" to the racist and slutty Native American portrayals in "Peter Pan" and "Aladdin."

Still, wrote my cousin Adrienne Silva, “It's nice to have characters and toys that look more like us. I saw a crispy white dad and his daughter excitedly looking for a Tiana doll when "The Princess and the Frog" came out. It’s not perfect, but it's a start. As a parent, I purchase my kids all brown when possible . . . and unfortunately, the fact that it’s even a possibility is 'progress' in this country.”

Said Natahne Dennis: “I'm sure there were inaccurate portrayals, there's always something wrong to critics," adding, "I know my child left feeling empowered as she quoted lines from the movie. If nothing else, it was an indigenous woman determined to bring healing back to her people.”

And this universal theme, of knowing where you come from and honoring that, may have to be enough for now.