Sorry, "Die Hard" fans — the story of Martin Riggs and Roger Murtaugh is the holiday movie we need now 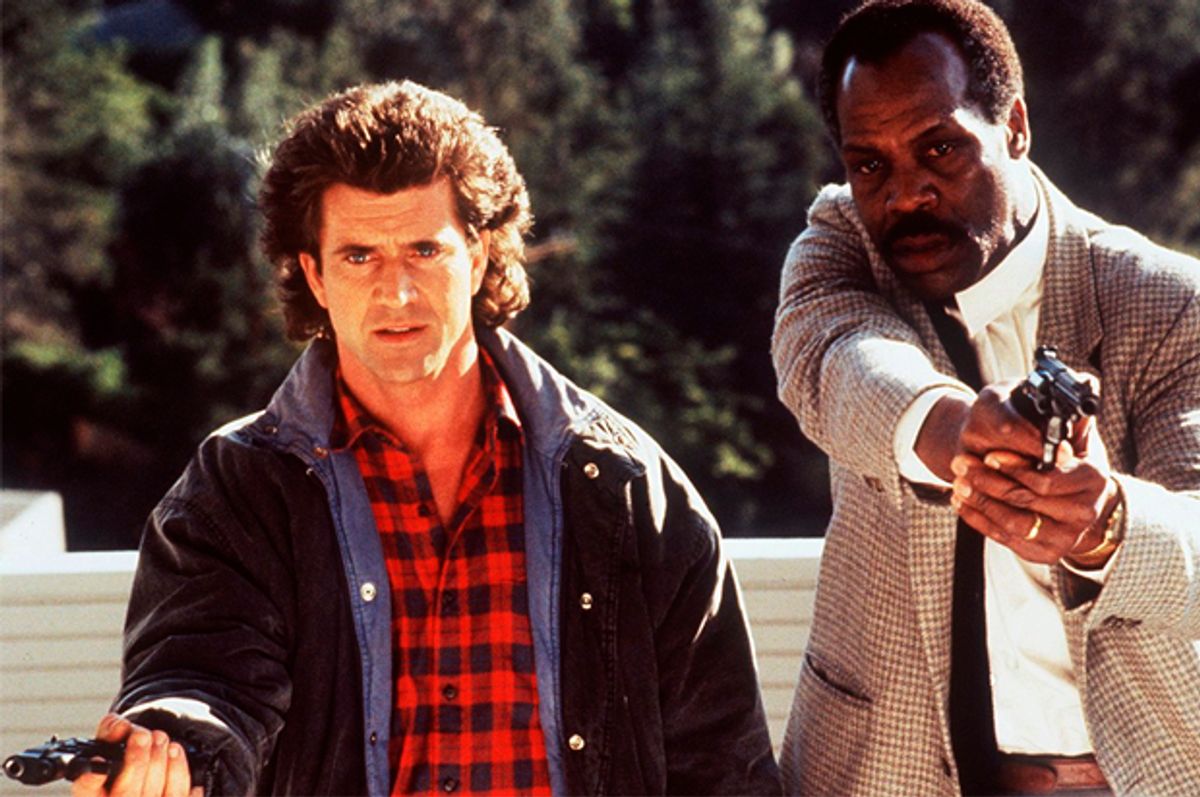 “What does the shepherd say to the other shepherd?” Martin Riggs asks his partner Roger Murtaugh, as he cuts him loose from captivity, saving his teenage daughter at the same time. “Let’s get the flock out of here.”

This dumb joke, a throwaway line in the 1987 buddy-cop action flick’s climactic bad-guys-getting sequence, isn’t your first hint that “Lethal Weapon” is gunning for Christmas-classic status, but it is the film’s most overt nod that its heroes are aware of carrying out their rescue-and-revenge mission against murderous heroin smugglers during a time usually dedicated to peace on earth and goodwill toward men.

The Internet’s favorite Christmas movie may be “Die Hard,” but I prefer my explosive hero-cop entertainment more explicitly informed by the twin powers of Christmas culture homage: Charles Dickens’ “A Christmas Carol” and Frank Capra’s “It’s a Wonderful Life.” I was 11 or 12 when I first saw director Richard Donner and screenwriter Shane Black’s “Lethal Weapon,” and as an adult I’ve come to find a kind of spiritual comfort in its wildest moments. "Lethal Weapon" isn't just a movie that happens to be set at Christmas. Intentionally or otherwise, “Lethal Weapon” rings all the bells to satisfy even the most hardcore Christmas traditionalist.

When sour widower Martin Riggs (Mel Gibson), a suicidal Los Angeles narcotics detective with a Vietnam War Special Forces past, claws his way back from the abyss with the help of new partner Roger Murtaugh (Danny Glover) just in time for a Christmas meal, we see that “Lethal Weapon” is more than an odd-couple cop story. It’s a narrative of personal transformation that feels especially potent this year when so many, despondent over the results of the presidential election, are looking for a light at the end of the tunnel. OK, so the light comes from a bad guy’s car exploding — are we questioning Christmas miracles now?

This isn’t going to be the kind of essay that contorts itself to find perfect parallels with timeless Christmas stories. Gary Busey’s dead-eyed villain Mr. Joshua is not anyone’s modern incarnation of Clarence Odbody, let alone Jacob Marley’s ghost.

But any Christmas story has to reckon with the first Christmas story, whether it embraces any Christian theology or not. It doesn’t matter if the writer personally believes that a baby allegedly born more than 2,000 years ago to a young woman camped out in a garage offers, through his life and death, redemption for all humankind. The power of the Christmas story lies in its message of hope for renewal, which conveniently coincides in the Northern Hemisphere with the darkest days of the year.

“Lethal Weapon” wasn’t meant to be a Christmas movie, per se — Black set out to write an urban Western — but its late-December time frame is no coincidence. Black has said that he likes setting his stories at Christmastime because it grounds them in something larger than themselves. “At Christmas, lonely people are lonelier, seeing friends and families go by. People take reckoning, take stock of where their lives are at Christmas,” Black told Den of Geek.

"Lethal Weapon" rarely gets credit for being a Christmas story (more often, it's lumped in with "movies you forgot were set during Christmas"), but Capra’s “It’s a Wonderful Life,” another movie about a suicidal iconoclast who finds redemption through his work, didn’t start out as a Christmas classic, either. It didn’t go into wide release until January 1947, and would only catch on as a traditional Christmas movie when TV stations started showing it every year on the holiday decades later.

So what makes a shoot-’em-up movie about lonely people feeling lonelier set during Christmas into a Christmas story? I called my buddy Sean Daniels, artistic director of Merrimack Repertory Theatre in Lowell, Massachusetts, to discuss.

Sean is something of a Christmas story expert, with years of holiday theater productions under his belt. One year he staged three Christmas plays — “A Christmas Carol,” “A Christmas Story” and “The Santaland Diaries” — one right after another for three solid months of thespian Yuletide cheer. This year Sean’s theater is opening a brand-new Christmas story, Steven Drukman’s baseball-themed “Going to See the Kid,” which he says sparked internal discussion about this very subject.

“If it doesn’t end on Christmas, it’s not a Christmas show,” Sean told me. “But it’s also about this: How do these people feel they are more connected to each other in the end than they were in the beginning?”

Sean has strong opinions about ’80s pop culture, which is another reason why I wanted to talk to him about “Lethal Weapon.” Along the way, he successfully argued me into reconsidering my stance that “Die Hard” is a movie set during Christmas but not a Christmas movie. Ultimately, he points out — and I am forced to agree — that a Christmas story needs to show that its hero thinks about humanity differently at the end, which both “Die Hard” and “Lethal Weapon” do.

“Dickens writes about the idea that on Christmas, we see other people as not different from us, but as fellow passengers to the grave,” he said. “John McClane [the Bruce Willis hero of 'Die Hard'] is a bit humbled and changed by the end. He’s there for [his family] the way he hasn’t been in the past. Nobody thinks he’s going to be a great husband again, but he can still turn it around.”

Fine. I can accept that a fight against terrorists changes McClane, but I submit that “Lethal Weapon” better illustrates the spiritual depths from which a Christmas hero must emerge to reclaim his hope for humanity. McClane found redemption in the eyes of his family through his Christmas quest; Riggs undergoes a profound personal transformation that ends with him finding hope through human connection. His journey back to himself is long, painful, and ultimately achieved by releasing himself from the bitterness of his profound loss, a theme plucked straight from Dickens' original tale.

Riggs begins the film as solitary as an oyster — one that has taught itself how to smoke in its sleep. Like George Bailey of "It's a Wonderful Life," he believes he has no future on earth and wishes for his own death. Like Ebenezer Scrooge, he believes everything and everyone is shit. “Shoot me. Shoot me. Shoot me,” Riggs insists to a drug dealer who has taken him hostage in his first on-the-job scene. He is visibly deflated to emerge from that altercation alive. Emotionally crippled by the loss of his wife, Riggs has given himself over completely to his work — the only thing, he tells his new partner Murtaugh, a straitlaced family man, that keeps him from doing himself in. But the thread purportedly keeping Riggs alive appears to be growing thinner.

The story of “Lethal Weapon” unfolds as a series of spiritual trials for both Riggs, who stares down a single hollow-point bullet every day, and his partner. Their first major trial, of course, is finding a way to accept each other.

“God hates me, that’s what it is,” Murtaugh says, upon realizing that he has no choice but to partner with a cop who could be a danger to himself and to others.

“Hate him back; it works for me,” Riggs replies.

They find themselves in pursuit of the murderers of the daughter of an old war buddy of Murtaugh’s, who entreats him to find the perps and kill them, because “you owe me.” Murtaugh must weigh his obligations to his friend against his moral code. Riggs saves a potential jumper from the roof of a building by handcuffing himself to the man and jumping into a waiting cushion, and we are invited to consider that Riggs might have just as easily jumped the man off the unpadded side. Murtaugh struggles with the violence of his job, while Riggs appears to grow increasingly uncomfortable with the ease with which he can kill anyone who poses a direct threat.

When Murtaugh invites Riggs to dinner, the latter is forced to confront the ghosts of the future he lost when his wife died. When he allows himself to fall in love with the Murtaugh family — Trish’s bad cooking and good humor, the little kids’ raucous beats and rhymes, teenage Rianne’s luminous and innocent beauty, and of course his partner — the echoes of Scrooge’s own redemption through his love for the Cratchits is positively deafening. Rianne is no Tiny Tim, but when the bad guys kidnap her, Riggs helps her father save her just the same.

Riggs earns his redemption through the eyes of others — burnout suicidal psycho no more — but more importantly, he changes for himself. He actively resists killing Mr. Joshua until he has to. He becomes a little more like Roger Murtaugh — a man somewhat at peace with his future.

“Lethal Weapon” ends, as Christmas movies must, on Christmas. Riggs arrives at Murtaugh’s home, which is still battered from their epic battle with Mr. Joshua, to present Murtaugh with a Christmas gift. It’s not the biggest goose in the window or a raise, nor is it a bell to ring so a second-class angel can get promoted. It’s his hollow point suicide bullet, wrapped in a big red bow. Black's screenplay might have only been incidentally set at Christmastime, but his denouement could not come more directly from Dickens' own playbook: Riggs no longer sees himself as a solitary passenger to the grave.