The Maltese priest and the kidnapped Caravaggio: The amazing true story of the scrappy octogenarian who busted an audacious art heist 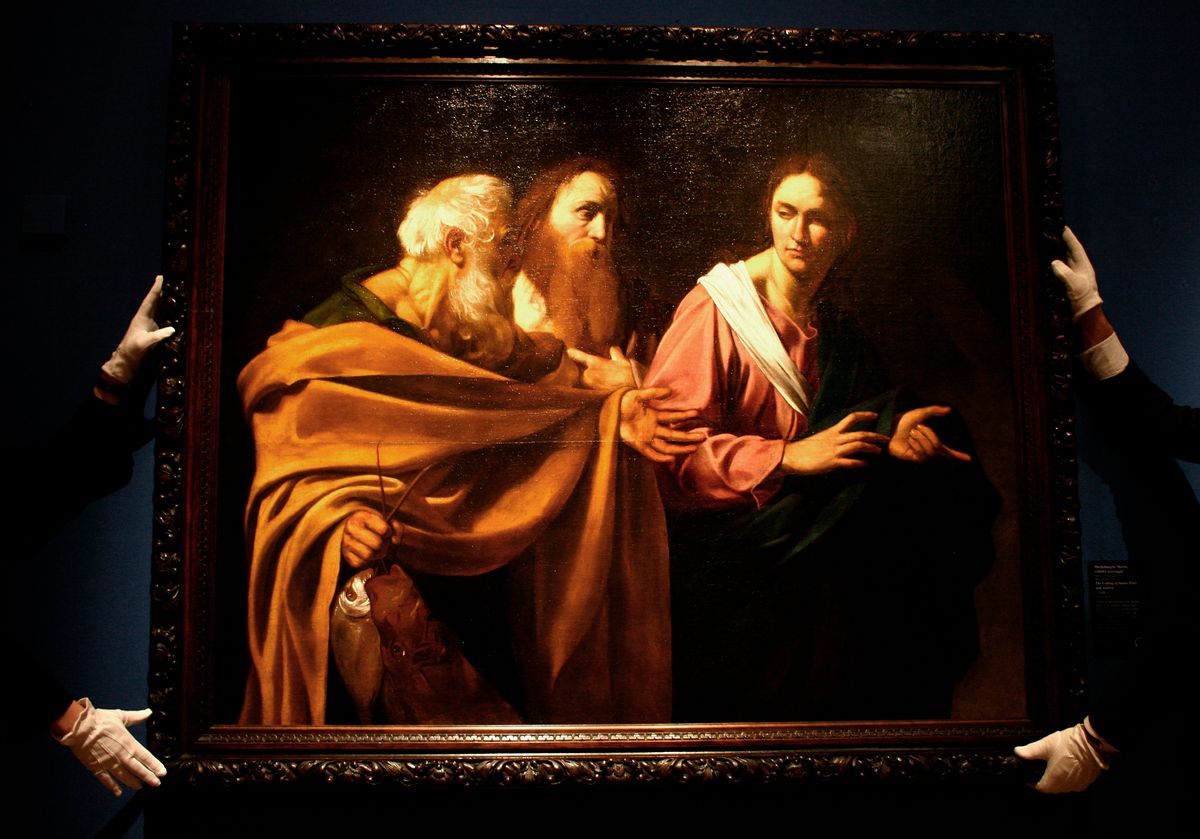 EDINBURGH, UNITED KINGDOM - NOVEMBER 12: Staff at The Queen?s Gallery at the Palace of Holyrood view The Calling of Saints Peter and Andrew by Caravaggio on November 12, 2008 in Edinburgh, Scotland.The painting is one of two lost works which were discovered in the Queens collection, it hangs along side Boy Peeling Fruit, and it is on display for the first time in Scotland, as part of The Art of Italy in the Royal Collection. (Photo by Jeff J Mitchell/Getty Images) (Getty/Jeff J Mitchell)
--

Thirty-two years ago, on Dec. 29, 1984, three people dressed as workmen strolled into a cathedral in Malta and robbed it of a Caravaggio. They strung a “Work in progress” sign over the entrance to the cathedral of St. John in Valletta, lowered the hefty painting, "Saint Jerome," from its gilt frame, then roughly cut it out. “An American tourist complained the church was closed,” says Father Marius Zerafa, recalling the incident. “When the curator came to see what the fuss was about, he got the shock of his life!”

Father Zerafa is a sprightly 87-year-old, and he’s lived a full life ripe with art — the pipe-smoking Dominican priest and painter eventually became director of all of Malta’s museums — but the most dramatic episode of his career was beating this gang of criminals to get that Caravaggio back.

Two years passed with no leads on the painting, which shows the elderly saint writing his famous translation of the New Testament, the first in Latin, called the Vulgate. In that time, the thieves smuggled it to Florence but failed to find a buyer — they even offered it to auction houses. The vast majority of stolen artworks are never recovered (as few as 2-6 percent​ in most cases​), so the outlook ​for its recovery ​was bleak. ​But desperate to profit from their hard-stolen trophy, the thieves decided to ransom it back to the cathedral, via Father Zerafa.

Zerafa ​was born into an influential Maltese family (his uncle, Sir Paul Boffa, became prime minister in 1947) and despite being “not particularly pious,” he​ joined the Dominican monastic order at 16, impressed by the riveting sermons of a priest who would later be canonized. He spent his first three years in his native Malta before moving to Staffordshire and Oxford, where he stayed until 1952. He studied art history at University of London and La Sorbonne. Back home in Malta, he became curator and then director of the Museums of Malta.

On Nov. 24, 1986, a young man approached Zerafa and thrust him an envelope containing a cassette and a Polaroid. He said the envelope was from Joe Borg, a very common name in Malta. Zerafa didn’t ask any questions — he assumed it was from his cousin of the same name. But the Polaroid was a recent shot of the Caravaggio, and the tape contained careful instructions from the thieves. “They gave me a password and instructed me not to speak to the police,” he says. “They wanted a ransom of half a million Maltese lire.”

As Malta’s leading art historian, Zerafa was something of a celebrity — a vivacious, outspoken priest and professor, always grinning, often appearing on television. He was the obvious person to contact​ with the ransom demand​.

Because of police corruption scandals in the early ’80s, Zerafa was worried the thieves had police contacts; the man on the tape said the criminals would know immediately if the police were involved​. He resisted telling the police, but did divulge the ransom demand to his bishop and Malta’s cultural minister​, neither of whom had any intention of paying up​, so as not to encourage future such crimes​. “Their reaction was not encouraging at all,” Zerafa says. “Ministers aren’t really interested in art. In my 20 years at the museums of Malta, I’ve learnt that a minister only attends a show if he’s the prime exhibit. At times, it was easier to deal with the mafia​ than with ministers and monsignori​.”

The thieves got impatient. They began to call daily. After weeks went by and no money changed hands, Zerafa got a parcel ​in the post containing a slice of the Caravaggio canvas. They intended to slice off strips until they were paid or the painting was destroyed. “When I received the first strip I was really happy, because I knew there was still a chance of getting it back.​ It had a special kind of lining, so I told the minister I would swear it was ours​.” Though he did not have ​access to ​the money, Zerafa feigned a serious interest in paying the ransom, to stop the thieves from damaging the work further. He argued he could not raise half a million, but could get a quarter of a million.

Then the frequent phone calls from the nervous thieves gave him an idea. He consulted a retired Carabinieri art detective and set up his own sting operation with a young colleague who traced the phone calls to a small footwear factory. Father Zerafa traveled to the town and made inquiries, via a wily taxi driver, to find out about the factory. “Every worker in Malta has a small booklet with his photo, name, details, called a workbook. They’re kept at the ministry. I asked to look at them and got to know that there were four men working at the shoe factory. The people phoning me, sometimes three times a day, were men.” Only at this point​, having conducted the investigation himself,​ did he inform the police.

He told the thieves he had their money and arranged to exchange the painting for the cash on August 4​, a symbolically-chosen date — it is the Feast of Saint Dominic, founder of Father Zerafa’s order​.

“​We decided to have the operation at my office at the museum. ​The police had a helicopter and a number of cars going round … the government wanted to make this a big show!”

But the ​spectacle nearly ruined the day, as the ​thieves spotted the helicopter and tried to escape. “The helicopter was following their car, so the police decided to arrest them immediately,” he said.

But the painting wasn’t in the car.

Two men were arrested (a third escaped) and finally led the police to the Caravaggio. After the arrest, a policeman told Father Zerafa the thieves had paid an associate £5,000 to kidnap him during the swap. The police hadn’t wanted to spook him, but an officer had secretly been assigned as his bodyguard all that day.

Unfortunately, the thieves had an excellent lawyer. “A policeman told them it was no use denying what they’d done, because their phones had been tapped. But they started a constitutional case because the phone tapping used to identify them was totally illegal.”

The case dragged on for years, during which time both of the arrested thieves died, one of natural causes and one of a drug overdose. “The suspicion is that it was administered to shut him up,” said Zerafa.

The painting was back, but it had been badly damaged -- awkwardly cut from its stretcher, rolled for transport, then mutilated by its kidnappers. ​Father Zerafa later penned a book about his adventures, the sadly out-of-print "Caravaggio Diaries." After a career that spanned painting to priesthood at the fore of the Dominican order, with sojourns teaching art history in Rome, studies at Oxford and La Sorbonne, and an eventual rise to become director of Malta’s museums, Father Zerafa’s out-dueling of Caravaggio thieves is still the highlight of a storied career. At 87 he is still going strong, traveling the world to talk about art, and even maintains an active social media presence. When asked about the key to his vivacity, Father Zerafa smiles: “I drink and smoke a lot.”