We, Robots: As "Westworld" finale looms, we have about as much of a clue as the hosts

We still aren't sure of what's happening with this show. Unlike the robots, if the finale fails us, we'll remember. 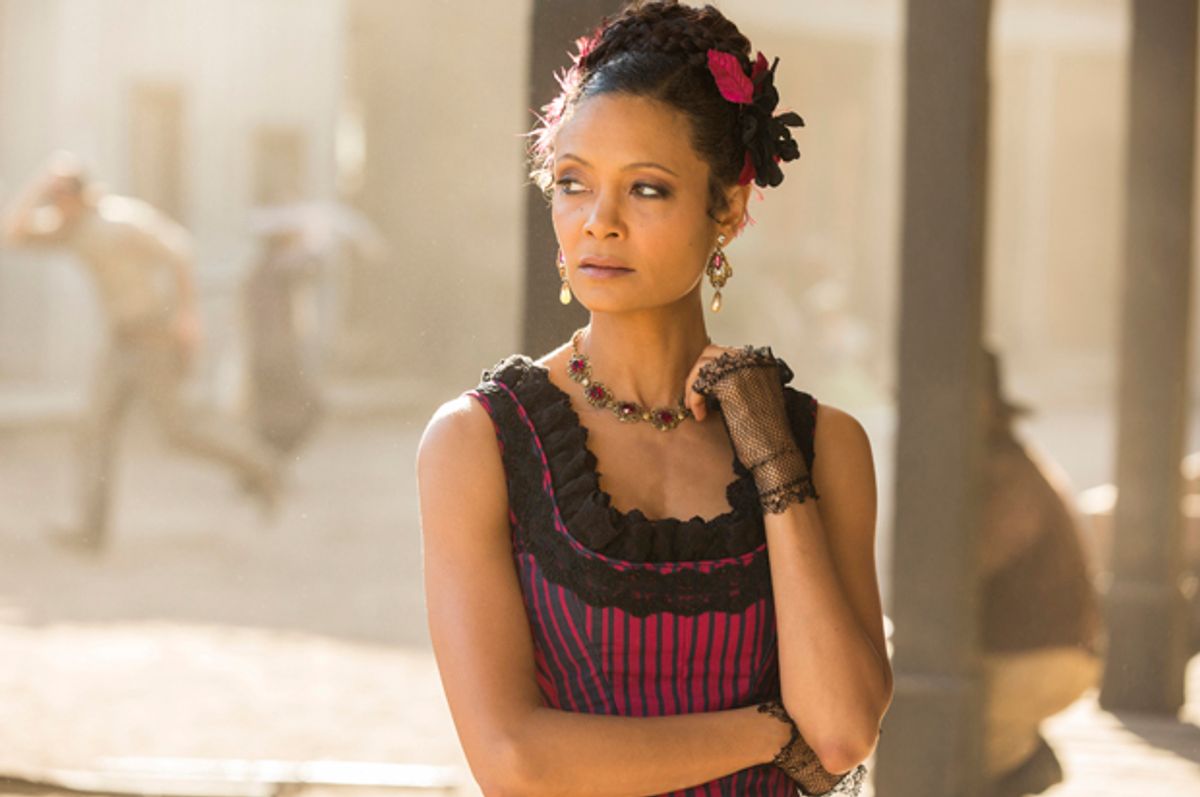 Nine times out of ten, a television series reveals what it aspires to be within the first two or three episodes. Standard practice across the medium is to establish that identity in the pilot, although producers of so-called prestige television often presume the audience will grant them additional level of patience in term of spooling out their plot.

We viewers are accustomed to this due in no small part to HBO’s influence on how we interact with television. Any series designated as artistically superior gets anywhere from three to five episodes to make its case these days. Some of us even cling to the hope that any time that we’ve put in to a “prestige” show, even with all of its plot holes and narrative irritations, will pay off if we just stick it out through the finale. Provided that last episode vindicates all the perceived missteps that came before, it’ll all be worthwhile.

Then came “Westworld,” a drama that defies definition on all fronts. Initially it appeared to be a simplistic, even base type of drama keen on perpetuating every criticism regarding HBO’s casual treatment of sexualized violence targeting women.

In short order the Western’s themes rapidly evolved like a rogue virus cloaked in a host’s artificial intelligence coding – dividing, multiplying, layering webs of complexity one on top of the other. Within each of those webs dangle subtle clues and suggestions hidden in plain sight. Easter eggs, one might say, but prizes that defy concealment.

To paraphrase Dolores, the central protagonist of "Westworld," some moments in this world are marred by sheer ugliness and disarray. The viewer can choose to see the beauty instead -- the purposeful detail series creators Jonathan Nolan and Lisa Joy stitched into each episode, and how each one fits within the story’s ostentatious weave. And as we step back to gaze upon the first season’s tapestry in its near-completion, marveling at all the effort that went into the story’s painstaking construction, the audience may be united by one very simple thought.

Something along the lines of, “What in the hell are we looking at?”

Sunday’s finale promises little in the way of definitively answering that question. It’s probably safest not to expect one. Guessing at what’s happening in this series is an absorbing distraction, but it’s also as pointless as Hector’s eternally doomed mission to rob the Mariposa Saloon of its safe. Westworld’s most-wanted gangster and the audience may think we’ve grasped something of value, but the people pulling his strings — and ours — know our theories tend to be as empty as that pilfered box Hector almost never lives to open.

Westworld, the park, is a masterpiece of artifice and deception as well as a micro-society in which the organic guests lord their natural-born consciousness, perhaps the most valuable currency in this world, over the synthetic creations inhabiting the place.

Indeed, consciousness is the sole unifying concept in “Westworld.” Every storyline in the park and every practice inside the park’s corporate headquarters, Delos Incorporated, is coded to explore all the messy roads that lead us from that idea into a moral and existential wilderness.

Consciousness is predicated upon awareness, a state that the hosts mimic with remarkable accuracy but, nevertheless, do not actually possess. Their mechanical brains are programmed to make their robot bodies interact with humans in specific ways; they bear their cruelties and even die, if that is the will of the park’s guests. Afterwards their memories are wiped and their brains reset. Memory is an element of awareness.

Lacking these qualities of consciousness, the hosts don’t feel shame or guilt -- they can only imitate those emotions. Thus, Delos employees demarcate the difference between the humans and androids by keeping the hosts nude when they’re not in service, which at first seemed like another element of HBO-style titillation. As the season progressed, that casual, dehumanizing nudity became a stand in for a slave collar, reinforcing the idea that the hosts are objects not deserving of basic dignity.

To viewers the hosts were never just things. They appear, behave and bleed like humans do — a visual lie the series foisted on its observers. The ability to deceive is one of the gifts of consciousness.

When you think about it, the series never reassured us that we wouldn’t be lied to. Deception is at the core of the game in the park; realizing that it permeates everything keeps the audience guessing. As I’ve previously observed, “Westworld” resembles a massive multiplayer role-playing game. What I didn’t know then was that it would cast the audience in a non-player character role.

Understanding the separate cogs within “Westworld” and how their teeth ostensibly fit with and turn others is, as the theme park’s players might say, merely the basic experience. But ever deeper levels revealed themselves with each new episode, to the point of queering every supposed known factor.

As such, the “Westworld” experience is one of lasting playability. Viewers can blow the straight narrative experience or spelunk down the rabbit holes of each character’s journey. There’s always some new detail to obsess over or quote to look up with Google.

Examining and untangling each hint, presented as an episode title, a character’s name or the secondary meaning of one of the pop songs playing on the saloon’s pianola, has become a passion of mine, as well as an irritant. I’ve re-watched episodes and been content to discover new flourishes in subsequent passes. Maybe they’ll come into play farther down the line. Or they could just be worthless rickrack trim.

I can’t help but be plagued by the feeling that this is all a fancy intellectual dance down the path to some mythical Candy Mountain of a disappointing payoff. I hope I’m wrong.

This feeling of uncertainty is part of the producers’ design.

The drama’s theme park is such a massive place that not even its most advanced players know where its outermost borders are. Operatives in the control room at Delos Incorporated monitor the moves of every guest and host. If anyone strays too far off their prescribed “loop” (i.e., the storyline written for the host and enjoyed by a guest), an operator intervenes surreptitiously, via remote-controlled manipulations or sometimes directly.

And within our loop, every twist and reveal was calculated and, yes, somewhat predictable, but also gave rise to a slew of new questions.

For example, is this a god game? There was certainly evidence that “Westworld” was an allegory for a triune god system, with driven park founder Robert Ford (Anthony Hopkins) cast as father, farm girl Dolores Abernathy (Evan Rachel Wood) as the son, and the once-and-still-mysterious Arnold as the holy ghost.

Theological themes abound in these 10 episodes, dropped here and there as casually as the show’s profusion of literary and psychological references. (This is a series designed to inspire reams of reading lists and academic papers; there are worse hobbies in which superfans can engage during its hiatus.)

But to what end, beyond impressing viewers? Ford is far more interested in creating consciousness than philosophizing about the responsibilities that come with its gift.

He quotes William Shakespeare and “Frankenstein” author Mary Shelley -- a classic, obvious choice — and makes no secret of the fact that he’s playing god. Except, that is, in the sense of holding important aspects of that notion from the work that represented (or represents?) the pinnacle of his genius: Bernard Lowe (Jeffrey Wright), his most trusted employee and right-hand man who, as it turns out, was never really a man at all.

As twists go, this was one that was shocking insofar as one may not have bet on the ruse being so evil. Few science fiction authors can resist fooling the reader into emotionally connecting with a character that turns out to be synthetic.

But the series' most memorable trick -- and Ford’s, by proxy -- was making one of the drama’s most humane characters turn out to be an android, and one made in the image of Ford’s deceased partner Arnold.

In doing this, as many have observed, the writers of “Westworld” bolster the notion that the audience is in the same position as the park’s hosts. We’re only slightly more aware of what’s going on than they are, and a sizable slice of that knowledge is, again, a lie.

No character in “Westworld” is what they were initially presented to be. Dolores Abernathy started out as helpless damsel ripe for the rhymes-with-plucking and rides into the end of the season as a gun-slinging heroine just a few beats away from discovering the truth of why she exists. Then again, maybe she won’t.

Maeve (Thandie Newton) pieced together ghosts of her memories to become self-aware, manipulated a couple of malleable underlings inside the home office and promoted herself from the Mariposa’s madame to the would-be leader of the robot uprising we all suspect is coming but, remembering the way this series works, won’t manifest in any way we’d imagine. Or maybe it will!

Then we have The Man in Black (Ed Harris), the archetypal hardcore gamer introduced as a VIP guest who’s seen it all so many times that he’s no longer bound by rules of propriety. The Man in Black, the man with no name, has since revealed that the source of his obsession with finding the expert level of the park’s game, the Maze, is similar to the desire driving Maeve and Dolores, which is to figure out who he really is.

And as we may come to discover on Sunday, we may already know the Man’s name. It could be William, the guest played by Jimmi Simpson, who has protected Dolores during her separate journey to the Maze. How could this be? Because part of our theories of consciousness include our understanding of time, and timelines, and memory.

Dolores appears to the viewer as some special, divinely guided avatar on a quest to free herself by locating and solving the mystery of the Maze -- the same maze luring the Man in Black to his destiny. But in a land populated with artificial lifeforms, there is no such thing as destiny. There’s only programming code, wiped and overwritten dozens of times; there, too, are glitches brought on by an upgrade Ford released at the show’s beginning.

This makes Dolores a bewitching, unreliable narrator, one of many in the story. Only in her case, we’re in the dark as to what she is -- and when she is.

All mesmerizing ideas, none of which answers the question we began with. As long as by the end of Sunday’s finale we have some sense as to whether the show’s ambitious narrative is taking us someplace concrete, that’s acceptable. Anything less, and I may have to wander off this loop to finally be free.