We're better equipped to live through Trump than we were Bush

We survived the G. W. Bush regression without social media and digital activism; we can hold our own against Trump 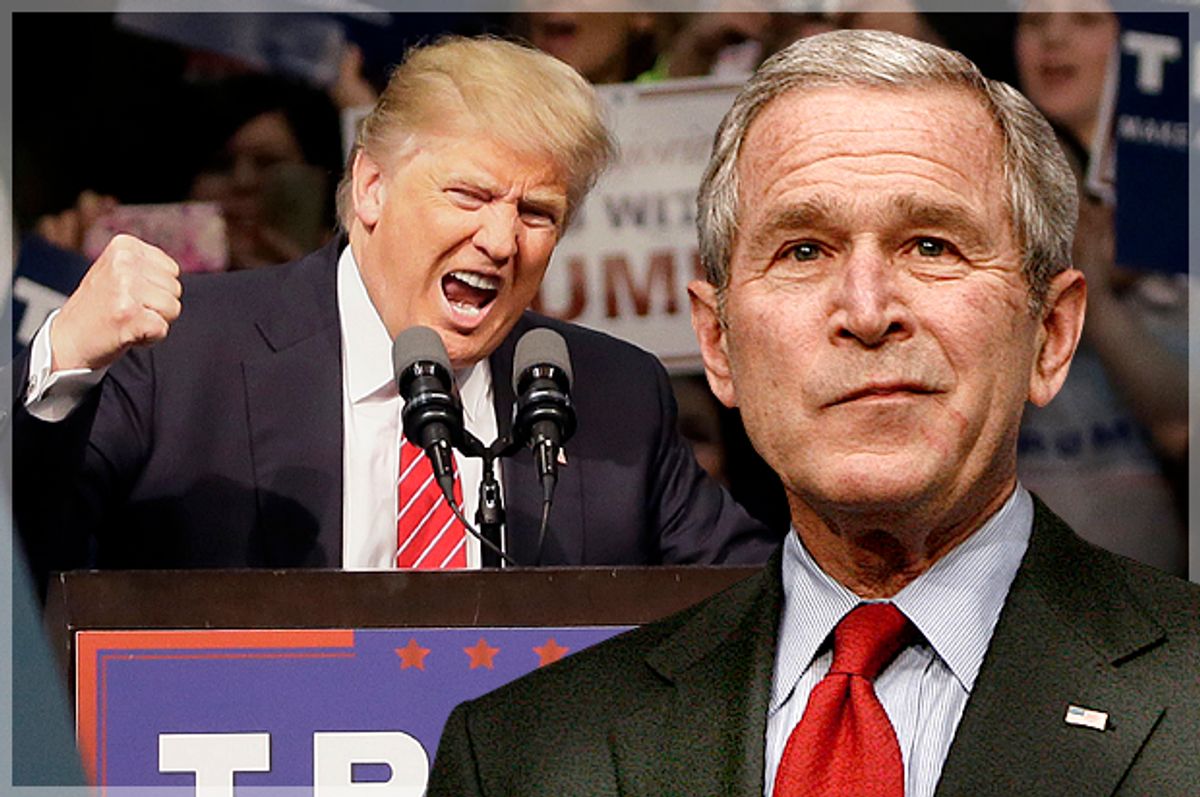 About six episodes into loving Issa Rae’s hit show “Insecure,” I hit pause on the HBO Now app, knocked over my iPad mini and bolted upright in bed.

“Can we still have nuanced shows about black people in Donald Trump’s America?!” I panicked, taking in deep breaths.

It was only a week after the electoral apocalypse, so it took me a beat to chill and remind myself that some of the greatest artistry of human history has been created during periods of resistance. Still, those mostly white Hollywood executives who’ve been green-lighting the likes of “Jane the Virgin” and “Fresh Off the Boat” and “How to Get Away with Murder” were undoubtedly emboldened by the mostly-white idea that the country’s demographic shift had gone mainstream in the Obama era. What if our culture takes a dive now and we all get stuck watching exurban white couples try to flip houses like Tarek and Christina on HGTV for the next decade?

In the very smallest and also most sizable of matters, no one wants to go backward. Except, of course, the nostalgic folks who want to make America great again. At a crossroads like this, the lessons of the past are more relevant than those of the present. As President Obama suggested in response to the election: “The path that this country has taken has never been a straight line... We zig and we zag.” It’s hard to imagine that this moment could be worse than, say, the soul-crushing disappointment and violation many Americans must have felt during the Reconstruction period after the passage of the 14th Amendment. For a society that has trouble remembering yesterday’s Insta posts, though, it’s fascinating to see so many people bracing themselves for the next four years by speculating about how they will compare to the Bush era. It’s comforting to see this growing societal desire for introspection and context, but does it reach back far enough? Is it even productive to consider the ways we might be better equipped to resist Trump than Bush? Some would say the alt-right is an entirely different beast, while others would say it is an outgrowth of centuries-old legacies we’ve stopped connecting in our contemporary analyses.

Let’s go there anyway and look for some takeaways.

Retrospection may have tempered some painful memories of the WMD danger that wasn’t during the last post-Clinton collapse for many Americans. I recall curling up into a ball cringing at every word of Jeremy Scahill’s "Blackwater" circa 2007, but I also cried the other day when W shared a picture of one of the 98 portraits he has painted of men and women who he says were “injured while carrying out my orders.” It’s doubtful we’ll be dealing with that kind of capacity for empathy between now and 2020.

It is sad — no question —  to think we might have had it much better back then, considering we ended on a devastating financial collapse, among other indignities too numerous to recount. Remember, though, El Presidente le gustaba hablar español. He prayed at a mosque six days after Sept. 11. He approved the construction of the recently-opened National Museum of African American History and Culture. He described Kanye West’s famous Hurricane Katrina dis as the “low point” of his tenure, and the pain was palpable, mounting evidence for those who would argue that Bush 2.0 was the conservative Lyndon Johnson — his compassionate agenda stymied by the September 11 attacks and subsequent war that defined his administration.

Given this, one could reasonably make the case that empathy is irrelevant to executive office from a policy perspective. We have to live with what happens regardless of how the president feels about it. We know we’ll face worse in the months and years to come, but there are some distinctions between then and now that are worth pondering and strategizing around. Our ability to recognize advantages is crucial.

We didn’t have social media during the Bush years. There’s a healthy and fervent debate happening now over whether we should blame slacktivism and filter bubbles for the rise of Trump. It’s a fair point. I recently re-read Malcolm Gladwell’s viral-before-that-was-a-thing indictment of the low-lift, short-form networked world, in which he says social networks can never provide the same impact as well-coordinated social movements. He sounds a lot wiser than he did in 2010 when he wrote it and all the freelance social media strategists got their panties in a bunch. Still, we should probably count access to social media as an advantage we didn’t have last go-around. It’s responsible for the closest thing to a populist revival this country has ever known. It’s checked the media, political, business and entertainment structures of our time — if imperfectly — and while it may still be lightweight by previous standards, it will surely flex some serious muscle as it matures. Look at the organizing power that’s been built using it. It was a major factor in President Obama’s election, and countless advocacy groups successfully built on that model. Additionally, cultural leverage and non-venture-based funding have created opportunities for individuals to dream, shine and produce work. Consider the hashtags like #blacklivesmatter that launched a movement, or the cult-following of #awkwardblackgirl that led to Issa Rae’s “Insecure,” or the crowdfunding of alternative media at Standing Rock, where members of the camp are generating stories to challenge mainstream narratives. There’s ample evidence of value, and there is room for growth. I was just in Silicon Valley last week, and the conversations I creeped on at restaurants were all centered around how the industry’s role must change. I was not surprised when the founder of GigaOm’s come-to-Jesus moment was recently shared far and wide in my own filter bubbles. It’s further evidence that the technorati will have to decide how virtual and analog life coalesce without severing the social contract. It could result in better tools that reach deeper.

Technology has decentralized the power of institutions. It’s mind-numbing to watch Hillary Clinton and Barack Obama extol the virtues of the American system and its peaceful transfer of power while handing over the keys to the guy they told us was “temperamentally unfit” to know the nuclear codes. Are they really so loyal to an infrastructure that long denied either of them the right to vote, yet alone hold higher office?

It’s no wonder that the anti-government folks recognized this decline in institutional relevance and pounced on it. However, it could backfire on them. I’ve spent a great deal of time gaming out bleak authoritarian scenarios that include surveillance and martial law, and one can argue that the tech industry is the country’s best hope against autocracy. Hackers and communications systems that could rival any government intelligence would be a significant asset to resistance movements. It may be a good idea to start diving deeper into who controls the infrastructure that keeps us connected, which is well-documented in Quartz’s map of the Internet.

We’ll be incentivized to think locally and solve problems outside of government. Despite the hyped-up binaries we’ve been taught to accept about the pipe dream of efficient government, reasonable Democrats and Republicans who work at the local level will tell you that red tape is a pain in the ass that impedes progress. Has the civic tech movement led by folks like Code for America been as effective as optimists predicted? Probably not. It certainly isn’t scaling fast enough — but maybe now it will have to!

We’re better at expectations management with respect to identity politics. Chris Rock did an incredible interview with Frank Rich for New York Magazine shortly after the 2014 midterm elections, and he made the observation that we talk about racial progress all wrong in America: “White people were crazy. Now they’re not as crazy. To say that black people have made progress would be to say that they deserved what happened to them before.” The comedian also posited that his children were growing up in a time where they are “encountering the nicest white people that America has ever produced. Let’s hope America keeps producing nicer white people.” Well, now we have a better sense of the actual size, scope and psychographics of the nice white demographic.

The majority coalition that won the popular vote with a minority of coastal, college-educated whites should send a clear signal to party leaders that the time is now for a dramatic shift in talent cultivation and new strategies. When time passes and people become more willing to admit that Hillary Clinton was a terrible candidate who had no chance of uniting the country, a stronger alliance will be built. People will suffer because she lost in potentially terrifying ways we can’t predict, and white America will continue to be insulated from those atrocities, as exemplified by SNL’s notorious Bubble skit, but this cost is as old as the Constitution. Perhaps newly woke white folks are starting to understand that people of color have always had to choose between the pandering lesser of two evils, and will take responsibility for their privilege next time they vote.

If this majority coalition can move past the electoral post-mortem squabbling and unite to disrupt the Republican Congressional mandate in the 2018 midterms, we may be in better position. You can bet the not-nice white people would have screamed “Impeachment!” the day after Hillary Clinton’s inauguration. A more sustainable, diverse coalition representative of the path forward could be available to us sooner than it would have materialized otherwise.

Theorizing about our advantages and forming new alliances will take some time, but the one thing we have on the daily is our ability to hold onto the vision of a healed America. When I settled into my Sunday night ritual last weekend for the final episode of the first season of “Insecure,” titled “Broken as Fuck,” I was feeling it. My relationship to the show changed in a way that mirrored my relationship to my country. I felt a gratitude, a courage, a connection that was exponentially more powerful. It will get worse before it gets better, but we have to hold on to the good stories.