American political history has plenty of precedent when it comes to politicians abusing women: Trump's was totally outrageous, not too outrageous to get elected

"No perverts!" cried Trump after Anthony Weiner was busted, but we have a rich tradition of electing just that 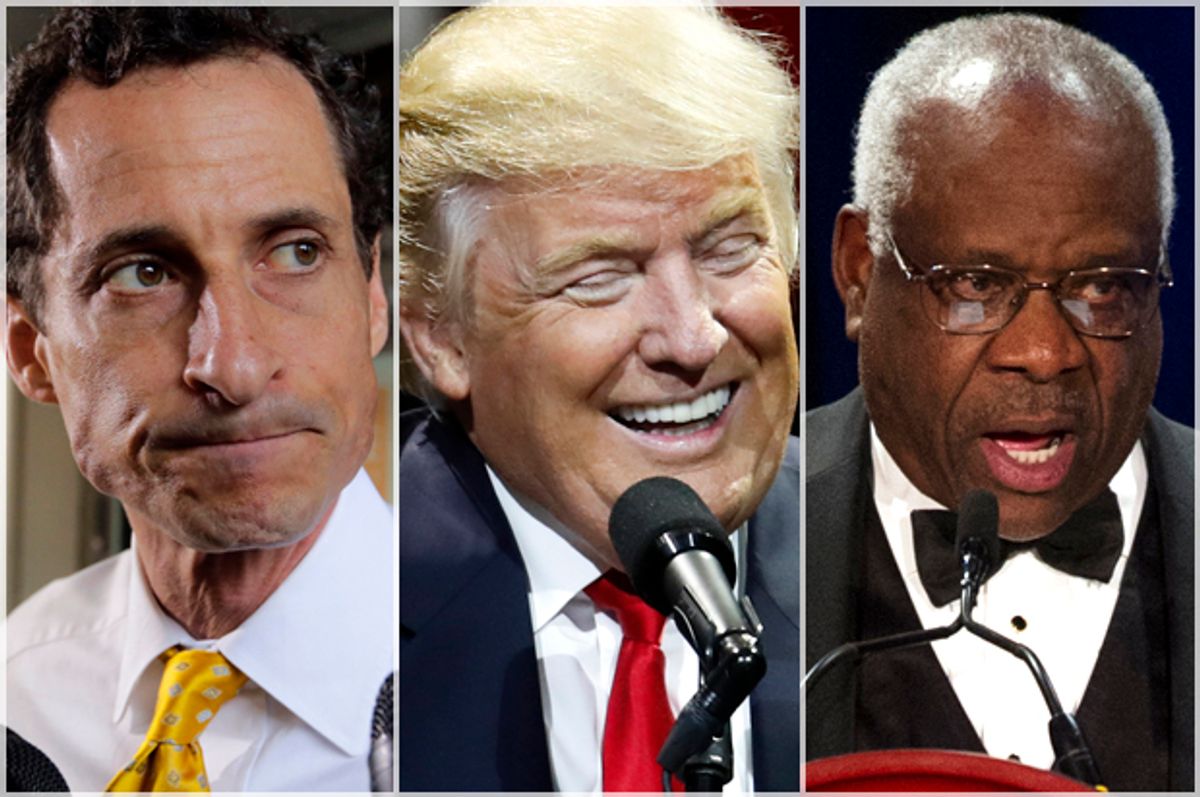 There was no shortage of scandal surrounding Trump’s presidential campaign, when voters witnessed his refusal to release his tax returns, jaw-droppingly racist statements and dozens of lawsuits. But it was the October surprise of a recorded conversation between Trump and Billy Bush on “Access Hollywood” bragging of sexual assault that, to many, ensured the Republican nominee’s defeat and highlighted an already widely publicized history of lacking respect for women at best and misogyny at worst.

Whether it was his rank assessment of debate moderator and Fox News headliner Megyn Kelly's menses  or saying that “putting a wife to work is a very dangerous thing,” the real estate mogul’s attitude towards 51 percent of the population was considered a surefire reason he would lose the general election.

Trump is hardly the first politician with sex scandals in his past, but he is the first to receive a resounding electoral victory with this many scandals in his past. Anthony Weiner, the former Democratic congressman, resigned in 2011 after news of his sexting young women broke. He attempted to revive his career by running for mayor of New York in 2013, but a second sexting scandal was then revealed  and Weiner lost the election, winning only 4.9 percent of the vote. (In the documentary “Weiner,” Trump is seen shouting about the titular former congressman, “We don’t want perverts elected in New York City! No perverts!”)

But politicians’ sex scandals, and the public’s acceptance of them, is a tale as old as America’s government itself. It was 1843 when James Henry Hammond's "little dalliance” with his teenage nieces became public. Hammond had also engaged in sexual relations with slaves as young as 12. He was forced to withdraw from his Senate bid in 1846, but he was later elected in 1857.

Sexual scandals continued, as did the incumbency of the accusers, as was the case for John Young, a Democrat from Texas, who allegedly demanded sexual favors from a staff member in exchange for a higher salary. Young, who was running unopposed, was re-elected with 61 percent of the vote, and a Justice Department investigation concluded that the criminal charges were not supported by evidence.

Another politician who was re-elected following a scandal was New York Democrat Fred Richmond, who was arrested in 1978 for soliciting sex from a minor. Richmond later admitted that he had “made bad judgments involving my private life.” The Senate Ethics Committee investigated Senator Daniel Inouye after one Hawaii state senator declared that nine women claimed to have been harassed by him but did not want to come forward with their accusations. Without witnesses, the committee dropped the investigation.

Congressman Gus Savage was excused from any disciplinary action for fondling a Peace Corp volunteer, even after the House Ethics Committee determined that the events did occur, because he wrote to the woman saying that he “never intended to offend” her. He was then re-elected. Another representative who escaped consequences was Brock Adams, who was accused of various acts of sexual misconduct, including everything from from sexual harassment to rape, but did not face criminal prosecution. Congressman Mel Reynolds was indicted for sexual assault after having an affair with a 16-year-old campaign volunteer. He went on to be re-elected, but resigned his seat after being convicted on 12 counts of sexual assault, obstruction of justice and solicitation of child pornography.

And Clarence Thomas was confirmed as an associate justice of the Supreme Court even after his former employee Anita Hill testified that he had harassed her — an accusation that Thomas referred to as “high-tech lynching.”

But Trump’s victory marked the first time that someone was elected to the most powerful position in the country despite the many accusations against him of sexual assault. And he intends to use that power, he said, to bring lawsuits against all of the women who have accused him — a threat that “outraged” Theodore J. Boutrous Jr., a constitutional and First Amendment lawyer who has publicly offered to defend pro bono anyone Trump sues for exercising freedom of speech.

Boutrous, who is a member of International Women’s Media Foundation's board of directors and who served as one of the lead lawyers for the plaintiffs in the successful federal constitutional challenge to California's ban on same-sex marriage, Proposition 8,  said it is decidedly difficult for an individual plaintiff to receive fair treatment when alleging sexual assault by a public figure. Boutrous explained that often a defendant can use his public position to attack the accuser’s history and reputation, and this strategy — known as victim blaming or slut shaming — often deters women from speaking out. (The Rape, Abuse and Incest National Network reports that out of every 1,000 rapes, only 344 are reported to the police.)

“It makes it very intimidating, even more so than in an ordinary case,” Boutrous said. “There are other problems that you face if you’re bringing a case like that. It raises all kinds of other issues about your profession. We know all the complications just to bring a case, when it’s not a public person. When it’s someone famous, we see the pattern repeated over and over again. The public attacks on the credibility of the individual."

Added Boutrous: "Now, when you can amplify it with social media and other people who support the public figure, it makes it very difficult to ensure we can see justice done in a case where someone has really been injured and has a right to compensation and recovery — at least have their right to not be discriminated against protected.”

This de facto restriction isn’t likely to end in the near future, according to Chris Campbell, a criminal defense attorney in New Jersey. “I don’t think anything will be prosecuted any more strenuously or less strenuously,” Campbell said. “Most people don’t have the political protection and money that [public officials] do. Unfortunately, however, I think it has created at least an atmosphere where some people might think it’s a little bit more socially acceptable to get away with it.”

And according to a little less than half of American voters, sexual harassment and assault are socially acceptable. Despite apparent public outrage and breathless nonstop media coverage of the accusations made against Trump and polls that predicted a victory for Clinton, when women were in the privacy of a voting booth, they voted for Trump.

This outcome may have shocked legions of  pollsters, pundits and citizens.  It wasn’t as big a surprise to Jennifer Pozner, media critic and author of “Reality Bites Back: The Troubling Truth About Guilty Pleasure TV,” who argued that the media’s reporting on the women’s vote often only reports on the activity of white women voters. This often results in inaccurate reports, statistics and conclusions. “The idea that it was such a huge shock — that 53% of white women voted for Trump — it is a shock that white women voted against their interests and for a sexual predator who bragged about being a sexual predator. But it isn’t a shock that white women voted conservatively. It’s more nuanced than a lot of people are reporting right now,” Pozner said.

Trump’s history of sexism (and also racism) put off some voters, but others saw him as a successful businessman and a breath of fresh air who would “shake things up” in the government. And a great deal of this normalization, Pozner said, was provided by media outlets, which printed decades of headlines and profiles of him and years of programing of Trump as a star or host of a series TV shows.

It was Trump’s reality show “The Apprentice” that created his persona as a human touchstone for success and wealth while ignoring the man’s troubled personal and professional history, Pozner said. “The Apprentice” also helped to normalize Trump’s disrespectful and often offensive and even illegal actions, airing on television actions that would have subjected him to sexual harassment and gender and discrimination lawsuits had they taken place in the real world rather than reality TV.

“NBC helped to normalize this behavior and this way of thought, while also helping to groom the public to think this is somebody who should be taken seriously," Pozner said. "When you’ve spent more than ten years, every week, watching somebody framed as the person who knows how to make really great financial decisions . . . whether or not that’s true is a separate thing. All of that comes to play,” said Pozner

Another aspect that contributed to Trump's acceptance by the public is the way the media covers sexual assault, including unconscious and deliberate victim blaming and slut shaming — which is complicit in not only creating but also amplifying, conditions under which sexual assault happens without consequences and often resulting in victim blaming. The "Access Hollywood" tape was a violation of politesse too spectacular to ignore, however, and Anderson Cooper’s questioning of Trump about the scandal which broke just days before the second presidential debate was clearly a deliberate effort to focus the issue. Cooper consistently and repeatedly used the words “sexual assault.” But Cooper’s words were a notable exception to typical treatment of the subject, which Pozner described as “almost always abysmal.”

For Boutrous, the election paints a larger picture, amplifying the social, economic and political problems women have and continue to face throughout America. “It’s really a serious issue that’s emerged from this election,” Boutrous said. “All these events of the election magnified the day-to-day hurdles and indignities that women face across race, across socioeconomic spectrums. There is consistency there. These things are happening that shouldn’t happen. This election took a big magnifying glass to our society and what you see is not an attractive picture.”

“It really doesn’t make any sense. You have a female who’s come closer to becoming essentially the most powerful person in the world than any woman ever has,"said Campbell. Female voters "just went, ‘No, we’ll vote for the guy who has been quoted as deriding women in various ways over the course of his life.’ It’s mind-boggling.”