Fascinating world views from a frost-covered rose hip in Germany to an adorable seal pup in Louth, England 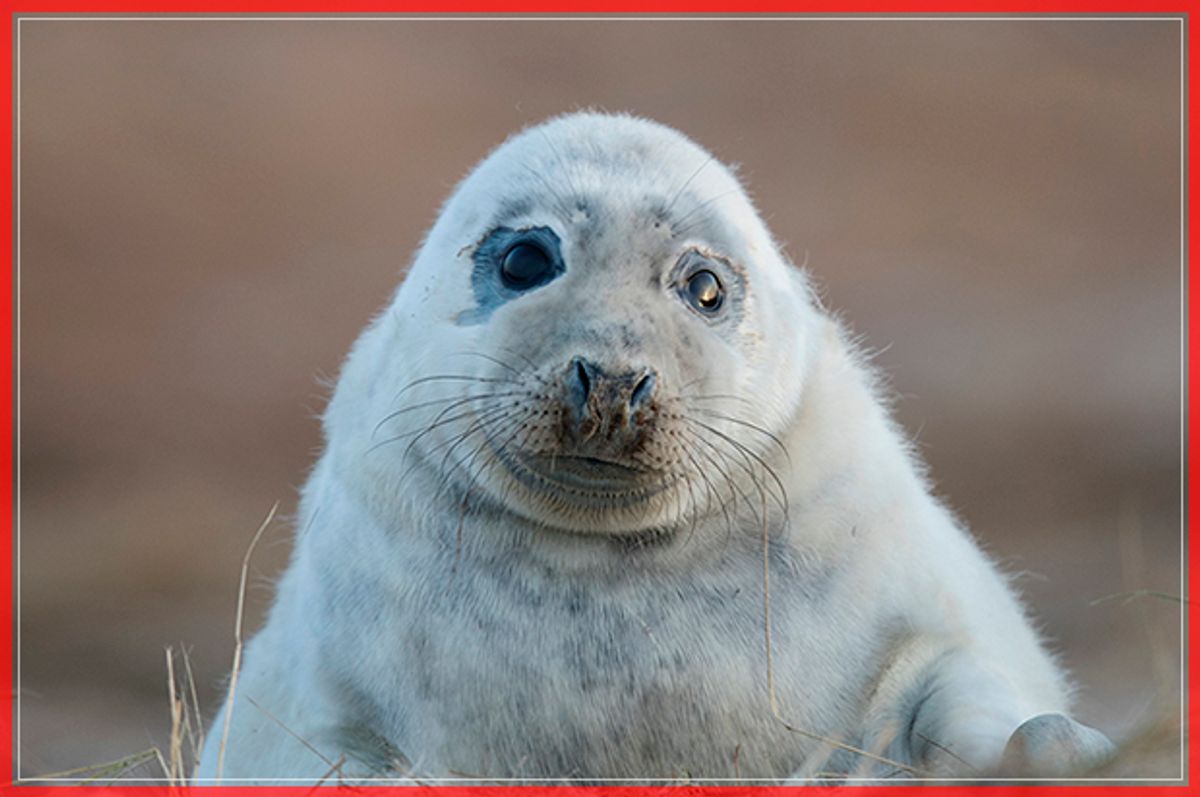 LOUTH, ENGLAND - DECEMBER 05: A grey seal pup lays in sand dunes at the Lincolnshire Wildlife Trust's Donna Nook nature reserve on December 5, 2016 in Louth, England. Seal numbers have continued to increase with over 1600 pups born at the reserve this year. Large bull seals are the first to arrive at the reserve in late October or early November where they will wait for females. The cow's arrive later and are herded into harems by the bulls, where they give birth to a single pup which is covered in white fur. The seals return to the North Sea in January before returning to the same area to give birth the following year. The Donna Nook reserve is the UK's premier destination to see Grey Seals and thousands of visitors from across the country come to see the wildlife spectacle every year. (Photo by Dan Kitwood/Getty Images) (Getty Images)
-- Look at this seal pup's face. Now imagine 1,600 of him rolling around this protected nature preserve and try not to sigh with contentment. Can the world be headed for ruin if gray seals continue to thrive? Parts of the area also serve as a military bombing target range, and seal-watching tourists are warned to "strictly observe all red flag and other bombing range warnings" when visiting. The human capacity for contradiction, in government-owned land purposes as with everything, continues to astound me. The seals have started to make their way back to the sea as mating and birthing season winds down. Wish them well as they leave their sanctuary.

Tietjerk, Netherlands   Catrinus van der Veen/Getty
An ice skater skates on a frozen pond near a windmill in the village of Ryptsjerk I used to play pond hockey on a pond between my childhood home and the house my dad grew up in. Once, we shot a puck into a bush and when we went to get it out, we found a different puck with my uncle's (my dad's brother's) initials on it. I was young enough at the time that I don't remember all the details now. I'm starting to doubt my memory, though. How can a puck hide in a bush for 30-some years? Brexit and Trumpism are so often lumped together as expressions of the same global nationalistic upswing that it's tempting to see the parliamentary and legalistic hurdles pro-Brexit forces keep crashing into as predictive of the difficulties Donald Trump might have in implementing his own agenda. An expeditious exit from the European Union is far easier said than done, and Trump's boasts of ending Obamacare and renegotiating international trade and security accords will also crash hard into some (to his viewpoint) ugly political and legal realities. And, of course, there will be protests — when someone is willing to go out in public and fight for their cause while dressed in the manifestly absurd wig and robes of the 18th century British court, their commitment is not to be dismissed lightly. Yes, winter is coming. Yes, Jack Frost will nip at noses and tree tops. That's called weather. What's happening to our planet is called climate. And as the days continue to grow shorter and colder, don't confuse a need for mittens with a cue that climate change isn't a more urgent concern than ever. Enjoy the beauty of the season -- with curiosity and concern.