New Texas bill endangers LGBT youth: Behind the legislation that could lead to a surge in anti-gay conversion therapy

Dan Patrick believes he has a solution to Texas’ foster-home crisis: Let religious organizations pick up the slack 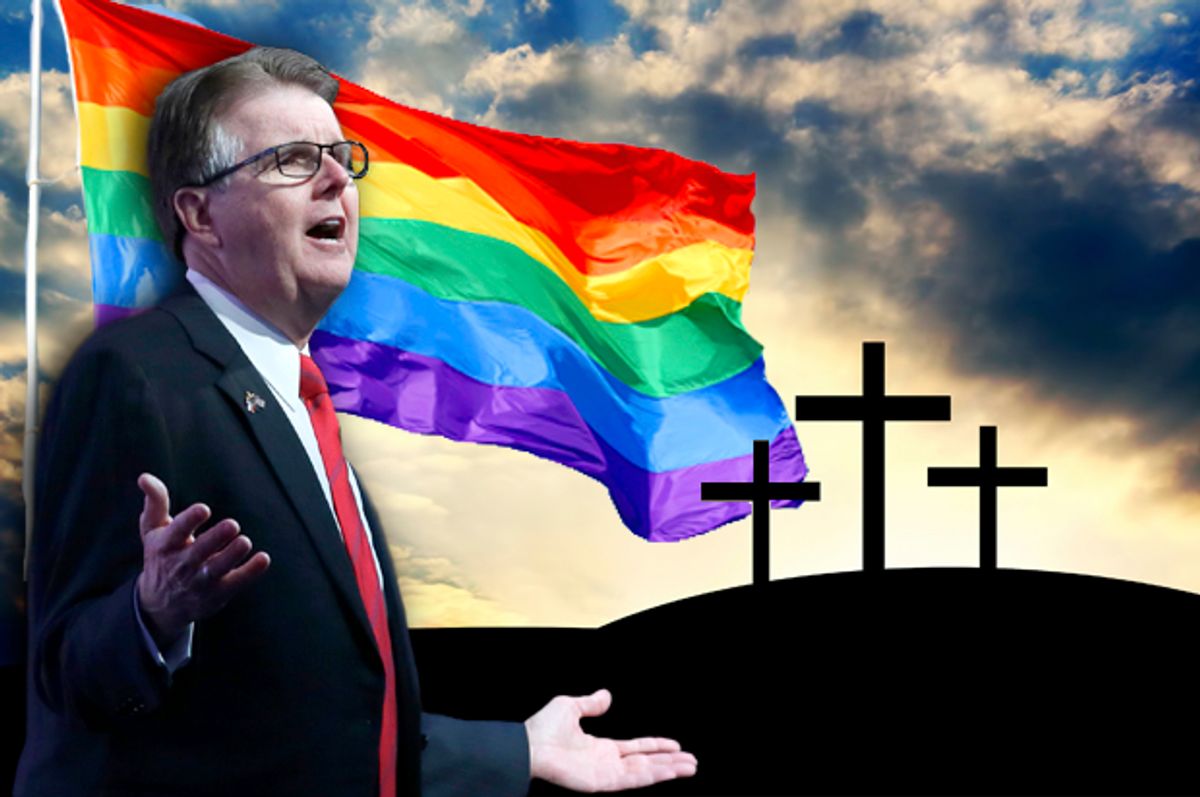 The Texas Tribune has reported that the lieutenant governor of the Lone Star State is pushing legislation that would allow “faith-based communities to identify foster and adoptive families for children” in response to reports of mismanagement by state agencies.

The state's child protective services, which has been woefully underfunded by the Republican-controlled legislature, failed to check in on more than 1,000 foster children within a six-month period, many of whom were at risk for abuse, according to the Tribune. In at least 1,800 cases when young people reported mistreatment from foster parents, the agency failed to schedule a check-in visit.

Allowing organizations to donate their time and resources to help fix the problem might seem like a necessary and crucial solution to help needy youth, but putting this responsibility in the hands of religious groups may make the issue worse, especially for LGBT minors. In a state where the Republican Party openly advocates for conversion therapy in its platform, this clears the path for outdated, abusive practices that will put youth in serious danger.

Texas has long been the center of the national battle over conversion therapy. Prior to the 2016 elections, the state GOP adopted policies supporting the practice, which seeks to cure LGBT people of their same-sex attraction. During the 2014 Texas GOP convention, conservatives gave a thumbs up to “praying the gay away,” referring to homosexuality as a “choice.”

“Homosexuality is a chosen behavior that is contrary to the fundamental unchanging truths that has been ordained by God in the Bible, recognized by our nation’s founders, and shared by the majority of Texans,” the platform reads. “We recognize the legitimacy and efficacy of counseling, which offers reparative therapy and treatment for those patients seeking healing and wholeness from their homosexual lifestyle. No laws or executive orders shall be imposed to limit or restrict access to this type of therapy.”

Although five states and the District of Columbia have banned the practice, faith-based conversion therapy remains sadly commonplace in Texas.

Jeremy Jordan, who stars in The CW’s “Supergirl,” in June led an online fundraising campaign to release his cousin, Sarah, from Heartlight Ministries, an ex-gay camp located in Longview, Texas. The 16-year-old honor student was punished by her parents with conversion therapy after taking her girlfriend to the prom. (After the story went viral, Heartlight — which describes itself as a boarding school for “lost teens” — denied that the center offers such services.)

That campaign was successful, but many other young people aren’t lucky enough to be freed.

Brian Nesbitt, who grew up in Fort Worth, Texas, was sent to a therapist who employed unusual tactics to help him kick his homosexual desire. Nesbitt was told to snap a rubber band on his wrist anytime he had an impure thought. During a separate session, his counselor instructed the young man to shut his eyes and think of something that aroused him. As Nesbitt told The Guardian, his “nose [suddenly] became on fire.” That’s because his therapist had secretly broken an ammonia capsule and was forcing him to breathe in.

When that didn’t turn Nesbitt straight, members of his local congregation, Church of Christ, took even more drastic measures. They sent him to an exorcist.

There’s a reason these measures didn’t work. An overwhelming number of medical associations have testified that conversion therapy is ineffective at altering people's sexual orientation. The practice may instead do long-term damage to LGBT people. This long list of organizations includes groups like the American Psychiatric Association, American Academy of Pediatrics, American Medical Association and American Psychological Association.

Despite the opposition from such widely respected organizations, demand for conversion therapy in Texas has not abated. David Pickup, a family therapist in Dallas who offers such services, told The Dallas Morning News in 2014 that he sees about 25 to 35 LGBT patients every week.

The profound harm caused by conversion therapy became a topic of national conversation following the 2014 suicide of Leelah Alcorn. A transgender high school student living in Ohio, Leelah was forced into a Christian counseling program to help her “change” her gender identity. She was told by therapists that being trans was “selfish and wrong.” The 17-year-old subsequently took her life, posting a suicide note on Tumblr voicing the crushing loneliness and alienation she felt.

The Human Rights Campaign, a nationwide LGBT advocacy organization, has reported that conversion therapy is likely to adversely affect other young people. LGBT youth sent to “pray the gay away” counseling are found to be eight times more likely to experience suicidal ideation or attempt self-harm, as well as six times more likely to report serious depression.(At one time shock therapy was even used as a treatment to change gays.)

As the Tribune has reported, Texas’ foster care bill will provide a clear pathway to conversion therapy by letting religious organizations determine what’s best for LGBT youth, which could entail decisions extremely detrimental to their overall well-being. Throughout the country, LGBT youth are “disproportionately overrepresented” in adoption and foster care agencies. The Williams Institute, an LGBT think tank located at the University of California Los Angeles, has estimated that 40 percent of homeless youth are gay, lesbian, bisexual or trans.

Lt. Gov. Patrick, who took office in 2015, though, is unlikely to be swayed by these realities. Although he has never made a public statement about conversion therapy, he is infamously opposed to LGBT rights.

Following the Pulse shooting in June, which claimed the lives of 49 people, Patrick declined to offer his condolences to the LGBT victims. He instead tweeted a Bible verse, Galatians 6:7, that was widely viewed as a reference to the gay bar massacre. “God cannot be mocked,” Patrick posted on Twitter. “A man reaps what he sows.” In response to national outrage, the Republican politician deleted the tweet.

Patrick has also opposed equal access for transgender students on school campuses. In May he Department of Education sent a a letter of “guidance” to schools for children in kindergarten through grade 12 stating that in its opinion, trans students should be allowed to use locker rooms and restrooms that most closely correspond with their gender identity. The lieutenant governor claimed that the policy “ignores both common sense and common decency.” In response, he has pushed a bill that would force trans people to use public bathrooms that match the gender they were assigned at birth, legislation similar similar to North Carolina’s House Bill 2.

Three years ago the nation’s largest ex-gay organization, Exodus International, abruptly shut down after its president, Alan Chambers, apologized for telling LGBT people that “change is possible,” as the group’s slogan promised. “For quite some time, we’ve been imprisoned in a worldview that’s neither honoring toward our fellow human beings, nor biblical,” Chambers stated in a press release.