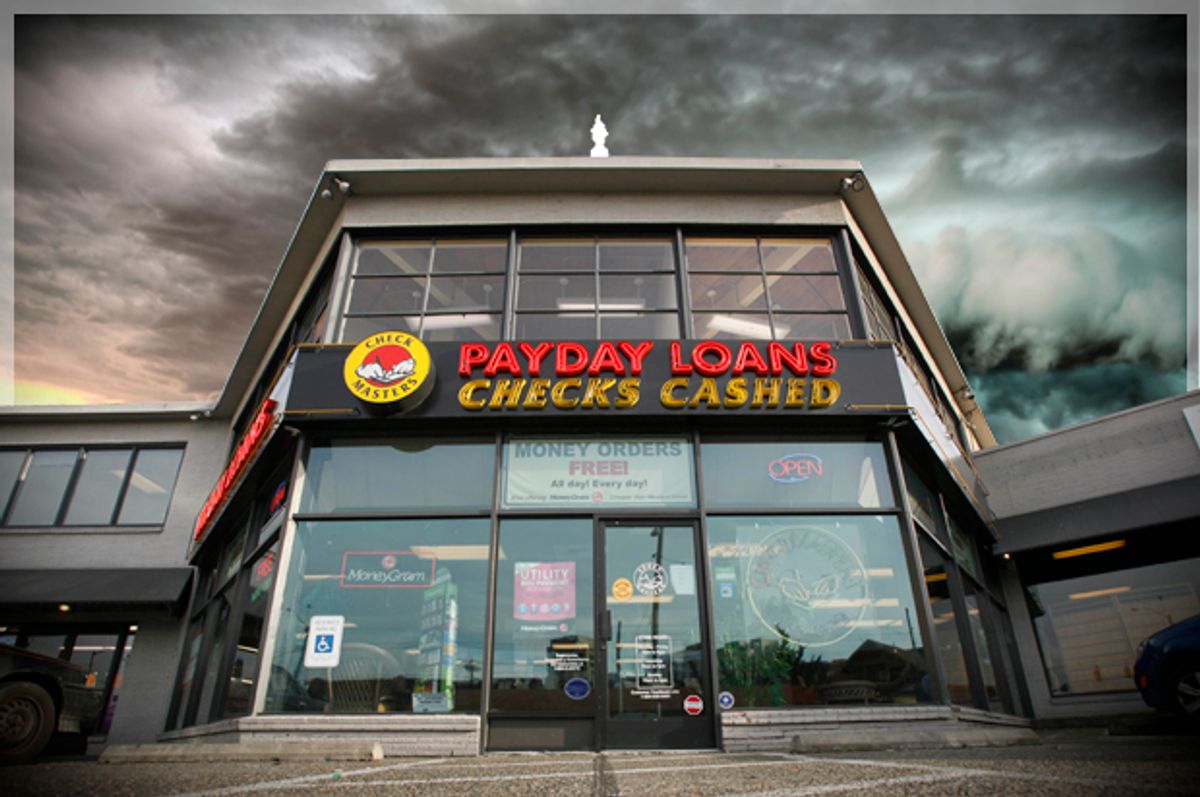 Payday lenders have been up in arms in recent years over federal banking regulators attempting to put "death sentence" limits on the industry.

But these nonbank lenders could soon find themselves with more passive regulatory oversight under a Republican-controlled Congress and White House that could radically upend recent efforts to crack down on predatory lending practices targeting struggling, low-income Americans.

“We have a president-elect who recently settled for running a fraudulent for-profit university who is also going to be appointing people to oversee consumer protection,” Joe Valenti, consumer finance director for the left-leaning Center for American Progress, told Salon on Friday.

But for now, payday lenders are on the offensive against banking regulators they say are orchestrating a “back-room campaign” to nudge banks into severing business ties with them, according to an emergency motion filed last week by the Community Financial Services Association of America and the South Carolina-based Advance America Cash Advance Centers, one of the nation’s largest payday lenders.

The motion is seeking to block three powerful federal banking regulators — the Federal Reserve, the Office of the Comptroller of the Currency and the Federal Deposit Insurance Corporation — from continuing what it calls a secretive three-year campaign to drive short-term, high-interest lenders out of business.

Regulators may be playing a role here — representatives from the agencies have declined to comment on the issue — but some banks do appear to be pulling away from their relationships with these companies. In the motion, Advance America claims that it has lost partnerships with five banks in recent weeks, including U.S. Bancorp and BBVA Compass.

Valenti said these nonbank lenders rely on ties with large national banks to ensure that they can withdraw payments from borrowers’ accounts and so they can work around state efforts to cap how much they can charge for their services, a practice colloquially known as a “rent-a-bank” strategy.

Payday loans have been controversial for years. Typically issued in amounts of $500 or less, these loans are directed at low-income borrowers who typically don’t have access to regular lower-interest loans because their credit scores are too low or they haven’t built a credit history. These loans typically come due on the borrower’s next paycheck, but studies have shown that the average customers winds up taking out consecutive loans for months at a time at alarmingly high annualized interest rates of as much as 400 percent. The lenders argue these loans are the only way for poor working Americans to access credit for short-term needs, like paying bills.

Whatever the case may be, the volume of these types of loans has been declining in recent years as the country digs out of the 2007-2009 recession. Last year, payday lenders issued nearly $40 billion in loans, a 14 percent drop from 2013, according to financial advisory firm Jeffries.  The federal Consumer Financial Protection Bureau estimates these lenders harvest $7 billion a year in fees and interest charges. And even though these loans are marketed as short-term ways to make ends meet, the average borrower winds up rolling over his or her borrowing from paycheck to paycheck for five months, according to the CFPB. They wind up paying an average of $520 to take out a series of consecutive $375 two-week loans over that period of time.

In the wake of sweeping Republican victories in the Nov. 8 elections, efforts by federal regulators to try to reel in predatory lending practices could be curtailed. The CFPB was established in 2011 as part of the Dodd-Frank Wall Street Reform and Consumer Protection Act and has been the target of scorn by lenders and their Republican allies in Congress. Now its efforts are at risk.

For example, the CFPB released a proposed rule in June to try to eliminate predatory debt traps from payday loans and loans backed by borrowers’ car titles. The proposal would require lenders to conduct a “full payment” test to ensure borrowers can manage the loan terms while still covering basic living expenses. The measure is aimed at reducing the propensity of these borrowers to take out numerous consecutive loans over a period of months.

But the CFPB is still reviewing the proposal, and it’s likely that any rule would not go into effect until next year, giving Republicans time to dismantle the agency’s efforts.

After President-elect Donald Trump takes office in January, he could attempt to replace the head of the CFPB, Richard Cordray, with an industry-friendly director — a process that would be complicated by a court battle over how the CFPB is structured. Trump and his Republican allies could also replace a single director with a commission on which industry representatives could win seats.

More likely, the Republicans could simply include riders in future appropriations bills to defund certain CFPB activities or exempt payday lenders from CFPB oversight. House Republicans have tried this in the past, but the riders were removed under threat of veto by President Barack Obama.

“There are lots of ways that the CFPB could be tripped up by the next Congress and the next administration,” Valenti said.

Now that efforts to neuter regulatory oversight at the federal level is about to get a whole lot easier, payday lenders may soon see an end to whatever “back-door campaign” they’re facing regardless of whether they win their emergency motion.