"Victory for the Sioux": Dakota Access Pipeline win elicits celebrations and a sigh of relief 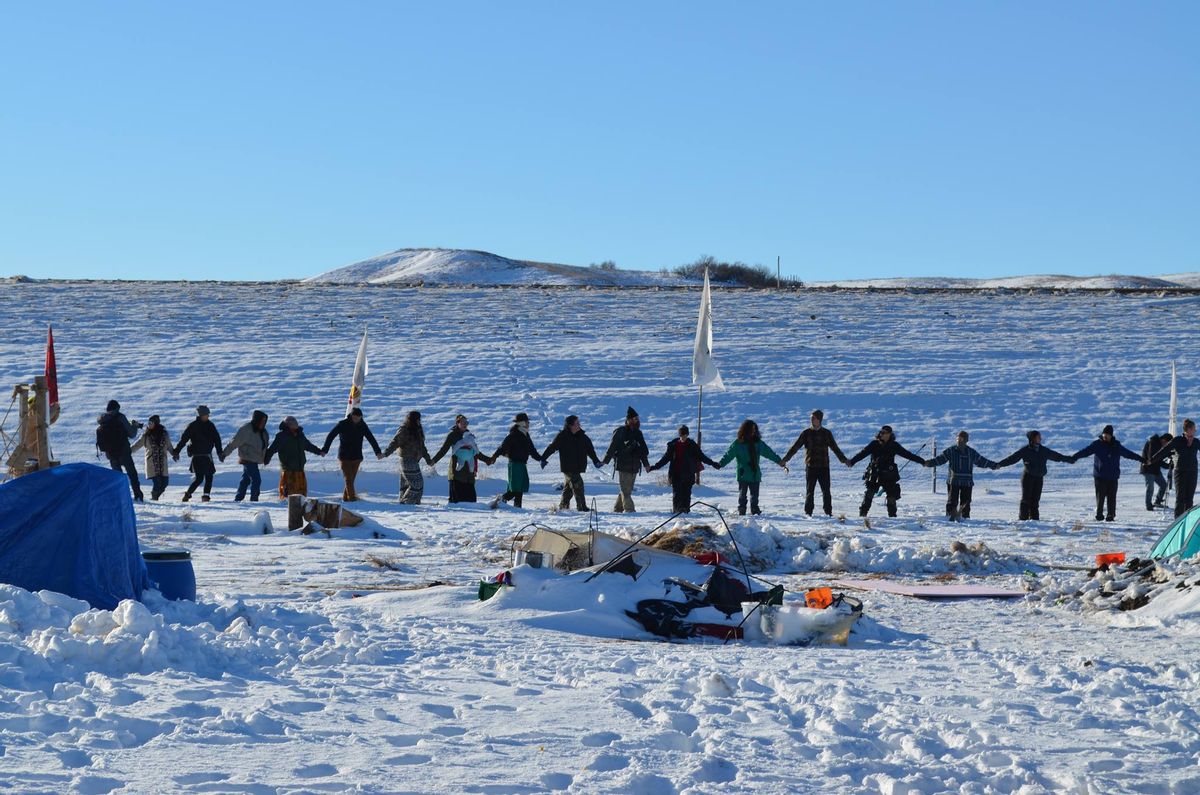 Many join hands in prayer at Oceti Sakowin camp shortly before the decision to halt the pipeline was announced. (Charlie May)
--

It was 20 degrees  Sunday at midnight at the Oceti Sakowin Camp in Cannon Ball, North Dakota, the site of the largest Dakota Access Pipeline resistance for the past seven months. For hours, a line of vehicles as far as the eye could see had wrapped around the hill, waiting to get into the main camp. The drums were going, songs rang out in the frigid air, fireworks pierced the night sky, the traditional ceremonial fires blazed and spirits were finally brighter than they have been for a long, long time.

“Wopila,” as the Lakota say, was in full effect. Wopila means thanks given for all existence and the blessings that go with it, and on Monday within the 7-month-old assembled community at Standing Rock that has grown 7,000-strong (with 300 tribes represented and an additional 3,000 Americans who joined the cause over the weekend), Wopila was being widely celebrated.

On Sunday the Army Corps of Engineers announced that it would not issue an easement for the Dakota Access pipeline to cross Lake Oahe, a Missouri River reservoir. Instead, the agency will pursue further National Environmental Policy Act analysis regarding potential impacts of the pipeline and will explore alternate routes.  Jo-Ellen Darcy, the assistant secretary of the Army for civil works, who oversees the corps, said in a statement Sunday, "The best way to complete that work responsibly and expeditiously is to explore alternate routes for the pipeline crossing."

Dave Archambault II, the Standing Rock Sioux's chairman, said in his own statement, "We wholeheartedly support the decision of the administration and commend with the utmost gratitude the courage it took on the part of President Obama, The Army Corps, the Department of Justice and the Department of the Interior to take steps to correct the course of history and to do the right thing."

On the ground, supporters were cold but elated. Huddled in an arctic tent, Matt Howard, co-director of Iraq Veterans Against the War texted, “It’s midnight and cold as hell, but I can hear folks drumming and singing right now.” Asked if leaving the comforts of home for a freezing tent to practice nonviolent resistance on behalf of Native Americans was worth it, Howard responded, “Yes, well worth it. These moments don't happen often, and even though the fight isn't over, this is a victory of people over militarized violence and extractive corporations. I feel both hopeful, relieved, and a bit curious about what comes next.”

"Everyone is cautiously optimistic for a number of reasons,” said Lance Gumbs, vice president of the National Congress of American Indians' northeast region. Gumbs, who is a Shinnecock tribal member as I am, spent time earlier this fall at Standing Rock as part of the Northeast delegation, which posted the flag of the Shinnecock tribe along with those of others from the Northeast.

“The Army Corps knew back in September that they had not followed the proper protocols and had the mandatory meaningful federal consultations with the tribe required when any operation may affect a local federal tribe," Gumbs added. "The mere fact that they rerouted the pipeline from up above Bismarck because the [local] whites complained about the same issue of potential pollution and leaks says it all.”

Earlier on Sunday the actress Shailene Woodley, who has been a vocal and present supporter of the cause, said in an atypically relaxed Facebook Live video amid audible celebrations, “It all started with the runners!” She meant the Oceti Sakowin Youth Runners, a group of young people from Standing Rock and other areas who, when organized early this year by young Sioux activist Bobbi Jean Three Legs, ran all the way to Washington to deliver  a petition with 150,000 anti-pipeline signatures to the Army Corps of Engineers. The runners conveyed their message of peace, resource protection and resistance, and as they passed through towns and cities, they sang, “We won’t stop! We don’t stop!” and “Mni Wiconi!” (Water is life!).

For Native Americans, running is a sacred and often a symbolic pursuit. The Navajo people always run to the east, just before the sun rises; traditionally they get up before dawn to meet and honor ancestors and other holy beings from the spirit world. “We run east to meet these holy people, and as we are running, we are celebrating life, we are celebrating all the blessings we are given," Navajo ultra runner and athletic coach Shaun Martin told me in October, when I first wrote about runners at Standing Rock. "We celebrate the negatives/hardships we have learned from. We celebrate the obstacles.”

Native American writer N. Scott Momaday wrote about this topic evocatively in his 1968 novel "House Made of Dawn":

Far below, the breeze ran upon the shining blades of corn, and they heard the footsteps running. It was faint at first and far away, but it rose and drew near, steadily, a hundred men running, two hundred, three, not fast, but running easily and forever, the one sound of a hundred men running.

Running reminds the protagonist Abel to reconnect himself to his Native American culture and accept the responsibility and heritage passed down to him from the previous generations. A similar reconnection has been happening for many Native Americans during this standoff between peaceful "water protectors" and the often brutal law enforcement personnel brought in by the builders of the Dakota Access pipeline.

From somewhere in the sea of tents, Marcus Frejo, aka Quese IMC and  a Native American rapper from Oklahoma City who's been at Standing Rock for some time, posted onFacebook.

As I lay here with flu like symptoms in my tent in camp, I'm pondering the day and how the past few days have unfolded. . . . Today has been a victory for our people. I think of them [as] youth that ran. They ran from cannonball to D.C. carrying a vision for the people, and it has always been about that sacred water. When they ran, they inspired our people, inspired all people and the world. And so we came to cannonball, and when we did there was those that saw it was the water that was calling us.

At Oceti Sakowin Camp right after the decision was announced, a 13-year-old youth runner named Tokata Iron Eyes told author Naomi Klein on video, “This entire movement was started by the youth. It started so small. It was really powerful to see everybody living together, praying together . . . and now the easement for DAPL was denied,” she trailed off, smiling broadly as though her face would break. “I feel like I got my future back!” Then her face crumbled and she began to cry.

“It's not just a victory for the Sioux, but for all of Indian Country that came together under one common cause, and that was the protection of water, a life-sustaining force,” Gumbs of the Shinnecock Indian Nation told me on Monday morning. “With the millions of people around the country and world who supported this cause, it brought to light many issues that still affect Indian Country and the inhumane treatment that was unleashed upon the water protectors, from the mace, attack dogs, concussion grenades, rubber bullets, noise generators, and the infamous water cannons spraying them down in 23-degree weather. No one thinks it's over, but there is hope with this crack in the armor!”

Gumbs said that finding a different route for the pipeline won't be easy and since the construction is about 95 percent complete he believes the company will pursue its case in court. But he remained elated. “Being at the camp was like nothing I've ever experienced in my life," he said. "On the way back, we were all talking about how to describe the feeling and emotional context of the greatest gathering of Indian nations for one cause in the history of Native American-U.S. relations.”

When the sun rises on the Oceti Sakowin camp, some may be starting to pack up. Many will stay, awaiting the next step in what may be an even more protracted battle to save their natural resources. The federal government on Monday ordered people to leave the camp, which is on Army Corps of Engineers’ land, though it has also said no one will be forcibly evicted.

Many at Standing Rock say they will stay and remain mistrustful of the government and corporations. "I know that Dakota Access will continue to work," LaDonna Tamakawastewin Allard, a Sioux tribal member, wrote on Facebook. "The lights are still on above the camp, Morton County has not removed the barriers, and they are moving in troops by Fort Rice. They think these people will leave the camps, [they] will be able to continue to work. Never trust these crooks. . . . [W]e have already seen what they will do to our people. Make them accountable. We need everyone on the ground until every pipe is removed."

Tents may come down on Monday and fires may be tamped out, but the spirit of optimism at Standing Rock will remain. “Our runners will be running into camp soon . . . keep your ear out . . . you'll be hearing us yelling around!” wrote Bobbi Jean Three Legs on Facebook shortly after the decision was announced. And so this modern indigenous people’s movement that began with young runners continues in a kindred reflection of the past. Momaday's "House Made of Dawn" concludes this way: "'Listen,' he said. 'It is the race of the dead, and it happens here.'"