NRA head Wayne LaPierre has been pushing a radical anti-establishment vision for years. Did he create this monster? 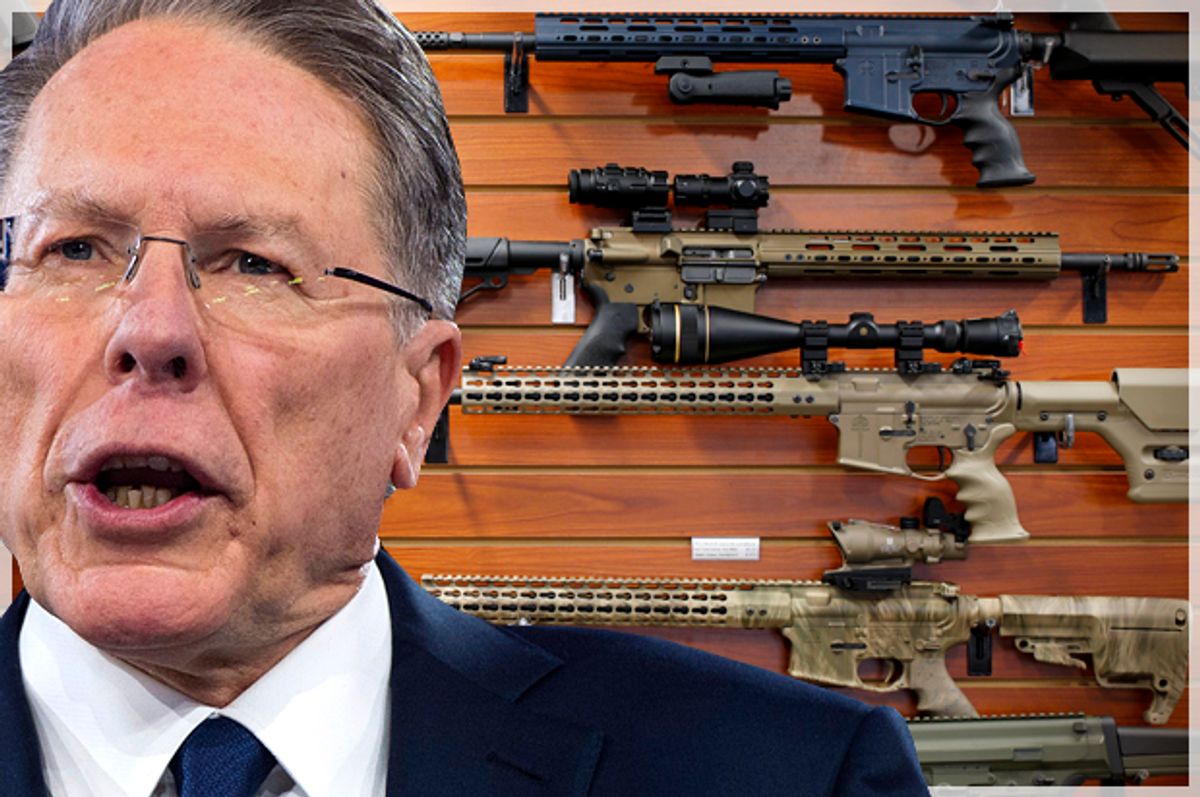 Sixteen years ago when Al Gore won the popular vote but was denied the presidency due to the anachronism known as the Electoral College, Democrats tried to figure out how they could prevent such a weird anomalous result from happening again. As early as the day after the election, The New York Times was already laying the groundwork for describing Gore's failure (although it would be many weeks before the result of that contested election became clear).

Vice President Gore had failed to spend enough time in his home state of Tennessee, it was said, opting instead to put resources into other toss-up states like Michigan and Wisconsin. But the real reason he lost was a grand geographical shift, according to the Times:

While Tennessee has moved to the right in national politics, Mr. Gore has moved to the left since his days as a congressman, particularly on issues like abortion and gun control that have put him at odds with many Southern voters.

Two years later when The New Republic's Noam Scheiber addressed the question again, conventional wisdom was sealed. Scheiber reported that on the eve of the 2000 Democratic convention the Gore team had realized they had a big problem:

“The entire target of communication was Pennsylvania, western Ohio, Michigan, Wisconsin, Iowa. That’s the world Gore was trying to reach,” [pollster Stan] Greenberg recalls. Since these areas were chock-full of gun-toting union members, Team Gore decided that gun control would hurt the vice president in the states he needed most.

After the election, the Gore campaign's hunch became Democratic gospel. Sure, Gore had won the Rust Belt battleground states, but the Democrats had lost their third straight bid to retake Congress — and many in the party believed gun control was to blame. In particular, they pointed to the election's regional skew. In famously anti-gun California, the Dems knocked off three incumbents. But throughout the rest of the country, they defeated only one. “Of all the issues,” insists one senior Democratic congressman, gun control “had the greatest net [negative] effect.”

That "regional skew" is a real problem. By 2004 candidate John Kerry was running around in a hunting vest with a gun slung over his shoulder bragging about always eating what he killed — not that it did him any good. The fact that he was against the sale of assault-style weapons was assumed to have been the kiss of death when those white rural voters rejected him.

The need to move away from "culture war" issues like gun control, abortion and marriage equality was considered gospel during that period in the Democratic wilderness. Then came the Iraq War and Hurricane Katrina and a teetering economy that caught up to the Republicans, and Democrats won big in 2008. The assumption then was that Barack Obama had managed to put together a new Democratic coalition that was not dependent on those rural whites who feared the loss of their guns so much they would vote against anyone who favored commonsense gun safety regulation.

We saw Democrats find their voices on the issue after a horrific spate of mass killings, particularly the horrifying 2012 Newtown tragedy, in which classrooms full of tiny children were mowed down by a disturbed young man with a semi-automatic weapon. It became a defining cause of the party, with President Obama taking the lead in pushing the issue and elected Democrats holding an unprecedented sit-in on Capitol Hill last spring to protest GOP inaction on guns.

During the George W. Bush years as well as the Obama years, the National Rifle Association was as active as ever. In 2000 when Bush finally prevailed in the vote, they were happy to help push the idea that his support for their cause was the defining issue of the election. The organization bragged that it would be working out of President Bush's office in the White House and NRA influence grew throughout his tenure as the group put money and organizing behind gun-friendly politicians at all levels of government.

But perversely or otherwise, the NRA actually experiences more growth when a Democrat is in the White House and the organization has become more powerful than ever during the Obama years. As the gun-tracking news organization called the Trace has pointed out, the NRA did this with a "populist" PR approach that perfectly dovetailed with Donald Trump's anti-establishment campaign. One might even suggest that Trump stole a lot of his shtick from the NRA.

In 2008, the NRA's visionary leader Wayne LaPierre declared war on establishment elites saying that they "believe the same elite conceit — you shouldn’t protect yourself. Government should. But we know there’s a little problem with that. They don’t give a damn about you!” The Trace reported on LaPierre's agenda:

Four years later, LaPierre expanded on the threats the elite posed to encompass free speech, religious liberty, even the ability of people to start small businesses or choose for themselves what kind of health care they want. Drug dealing illegal immigrants were being allowed to pour over the Southern border, he railed. Criminals in big cities were free to prey on innocents because judges were so lenient. “Not our issues, some might say.” He paused, and then countered: “Oh, but they are.”

In fact, the NRA has been pushing an anti-establishment message in one form or another since the mid-'90s. When candidate Trump came along, LaPierre understood that unlike what was the case for with the patrician Mitt Romney, Trump's sometime apostasy on guns would be outweighed by his ability to sell pitchfork-wielding populism and thinly veiled calls for vigilantism.

So the NRA went all in for Trump and spent millions on ads bashing Hillary Clinton in places like Columbus, Ohio; Greensboro, North Carolina; and Scranton, Pennsylvania. (I wrote for Salon about the NRA's first ad this past summer.) According to the Center for Public Integrity, nearly 1 out of 20 TV ads in Pennsylvania was paid for by the NRA, and the group ran nearly 15,000 spots in the crucial swing states that Trump narrowly won, deciding the election.

LaPierre has released a new video, taking a victory lap in which he fatuously declares, “Our time is now. This is our historic moment to go on offense.” First on the agenda is demanding that the federal government enforce "concealed-carry reciprocity," whereby states would have to recognize permits to carry concealed weapons issued by other states, as if they were as benign as driver's licenses. So much for federalism.

Most election postmortems have concluded that Democrats failed with non-college educated and rural white voters this time because of their economic message rather than guns or other culture-war issues. But perhaps that's just the other side of the same coin. LaPierre and the NRA have a powerful understanding of what moves this constituency and they've been moving it in their direction for many years. The NRA has been selling anti-establishment Trumpism long before Trump came on the scene. It's Wayne LaPierre's win as much as Donald Trump's.