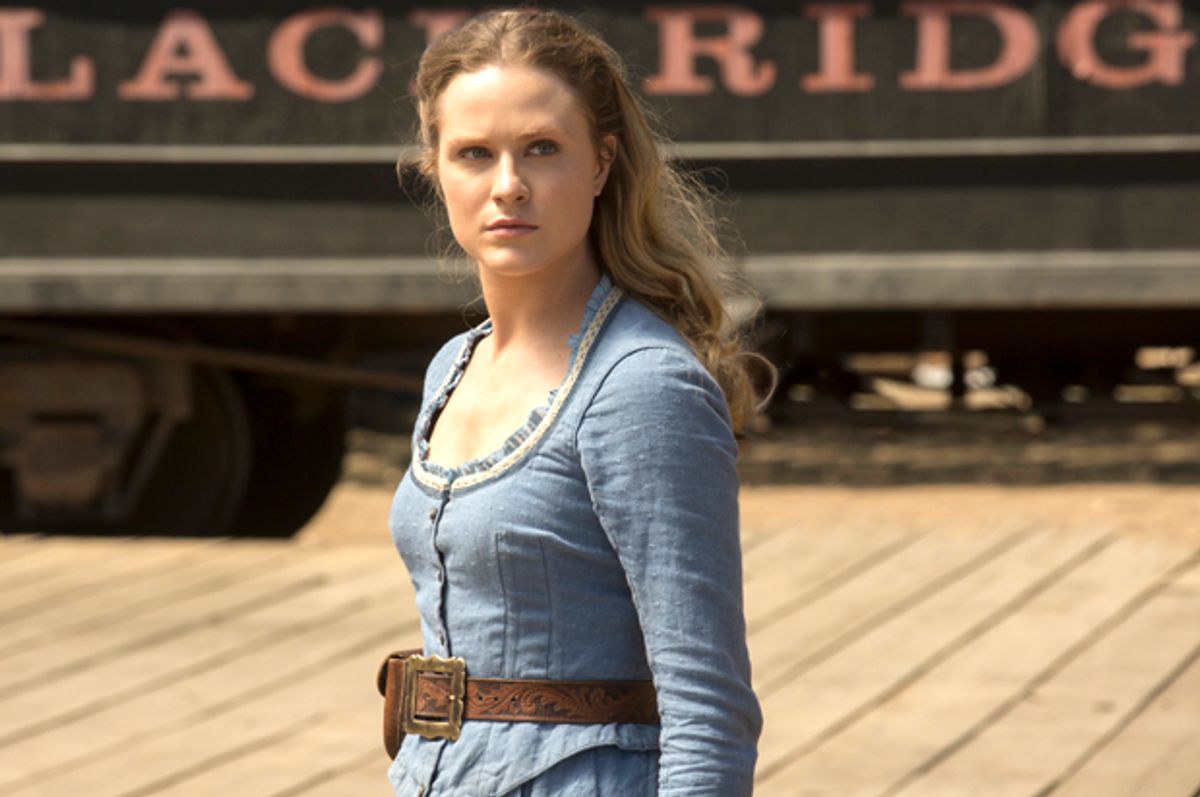 A central development in the season finale of HBO's “Westworld” concerns theme park founder Robert Ford (Anthony Hopkins) introducing his latest and heretofore top-secret narrative, titled “Journey Into Night,” with a romantic scene of doomed lovers Teddy (James Marsden) and Dolores (Evan Rachel Wood) embracing on a synthetic beach. As a mortally wounded Dolores swoons into oblivion, Teddy comforts her with passionate pledges of undying love. Behind them, a full moon shines down on shimmering dark water.

In front of them, well-dressed people sitting in several rows are watching politely. They’re the honored guests of the theme park’s parent company Delos Inc., and they seemed to be as moved by the scene as some viewers may have been — which is to say, not at all. Reliably, when the possibility of a central character’s true death is taken off the table, her dying gasps no longer evoke pathos.

Death, Dolores says during the 90-minute season closer, titled “The Bicameral Mind,” is “a place I’ve never been, a thing I’ll never do.” She comes to realize that this is what gives her kind a power over humans. “Your bones will turn to sand,” she defiantly tells her adversary at one of the episode’s peak moments. “And upon that sand, a new god will walk."

Before Dolores can truly be alive and escape her scenic prison, her maker warns that she and the other hosts must suffer even more than they already have. And Dolores has suffered quite a bit.

Viewers of “Westworld” may sympathize with the heroine in that regard. The season closed on a successful note overall, with a script by written series creators Lisa Joy and Jonathan Nolan that was as electrifying as it was puzzling and frustrating. Robot uprising? Check. Answers about the identity and purpose of several mysterious characters? We got 'em.

Deftly weaving together action sequences with mind-bending existential themes, Joy and Nolan resolved several pivotal mysteries about which fans have racking their brains since the beginning of October. That’s the mark of a creative team with confidence in where its story is headed; its producers can throw the audience a few steaks without blowing their appetite for the rest of the meal.

That Joy and Nolan did, while opening doors to new possibilities for the hosts, the park’s future and new interpretations of the question What the hell are we looking at? “I am in a dream,” Dolores says time and again throughout the first season. As the finale kicks off, she adds, “I don’t know when it began or whose dream it was.”

That’s the catch, isn’t it? Season 1 rolled out miles of intricate story and all the while, it was nearly impossible to suss out whether anything we were seeing was real or the fiction of some android’s synthetic imagination. And while Sunday’s episode cleared some of that haze, other details still remain murky.

Specific details of “The Bicameral Mind” are about to be discussed in depth, so if you want to avoid spoilers, stop reading now.

The appreciable appeal of “Westworld” lies in the fact that it doesn’t treat its audience like idiots. On the contrary, this is a show that actually wants the viewer to trust her base of knowledge while being open to expanding her understanding of what it means to be sentient.

A person doesn’t have to have read Gertrude Stein or Lewis Carroll or any of the philosophers or psychologists referenced in the series to comprehend what’s going on, though having done so may lead to a higher appreciation of the clues implied by the library’s worth of literary references sprinkled throughout season 1.

The only trait asked of the “Westworld” viewer is a willingness to pay close attention. The devil is the details, as the hoary old chestnut goes, and if a person carefully watched each episode, all the answers were right there. The clues existed in the small intentional inconsistencies, in the repetition of lines of dialogue that spoke to larger philosophical ideas.

They lived in the music choices, pop songs acting as reveries for the audience. That the final selection featured in Sunday night’s chapter happened to be a cover of Radiohead’s “Exit Music (for a Film)” was the proverbial cherry on the sundae for viewers who know that tune’s thematically appropriate lyrics: “Wake from your sleep,” the song implores. “The drying of your tears . . . Today, we escape, we escape.”

“Exit Music” makes a tall promise, and one that only a couple of characters fulfill, though not in the way that viewers may have expected. Ford, eager to break out of this prison of his own sins, escaped at last with a bullet to the brain delivered by Dolores, his final act as his corporate overlords pushed him out. Ford never planned to go out alone, and that immediately became clear.

The founder’s narrative was one of three main storylines concluded in Sunday night's episode, with two set to begin anew. In one of those plots, Dolores finally delivered a long-deserved reckoning to her tormentor, the Man in Black (Ed Harris), once they reached the center of their long searched-for maze.

As many viewers suspected, Dolores was bouncing between the past and present throughout the season, a fact that made the finale's ultimate reveal that William (Jimmi Simpson) is a younger version of the Man in Black not all that surprising.

Neither was the confirmation of another widespread suspicion — that the terrible villain Teddy was chasing, Wyatt, is actually a personality uploaded into Dolores. Wyatt never had his own face. But through Dolores, he murdered the first hosts on the orders of his creator, preserving the sanctity of the artificial evolution enacted by Arnold (Jeffrey Wright).

Winding throughout the finale are various examinations of human consciousness, the last concerning the theory that suffering is a crucible through which the evolved consciousness must pass. In remembering that pain, something hosts were never allowed to do, a being gains a better comprehension of choice and result.

The hosts’ horrifying fate has long been their requirement to live through different versions of hell again and again, never having the option to choose a different outcome. For the hosts who achieve a level of self-awareness — and as we find out, there are a handful of them designed to do so — the road to that understanding zigs, zaps and loops.

In the present, Dolores has enjoyed some richly earned payback by beating the Man in Black silly, breaking his arm in the bargain. In the past, she was Arnold’s instrument of mercy killing. Arnold, broken by grief over the death of his son, wanted to stop the park from opening to prevent the hellish existence that awaited his creations. That shocking move failed 35 years ago, and here we are now . . . and then.

As Ford reveals this dark episode to Dolores and a resurrected Bernard, the sentient host made in Arnold’s image, he shares Arnold’s key insight that suffering leads to an awakening into sentience.

It's no coincidence that Dolores’s name means sorrow and pain; she’s absorbed much of both this season, the freshest being a grave heartbreak that makes her realize she created the Man in Black. Her William hardened into a heartless man who would eventually buy Westworld and make possible her endless cycle of torment.

“The beautiful trap is inside of us,” Dolores tells Teddy later on that beach “because it is us.”

If suffering is the key to sentience, Dolores is beyond ready to be declared a real girl.

What about that robot rebellion? The season finale ends with a shot indicating that it was about to spark — an idea that makes William in Black grin excitedly. But Nolan also let us tag along with the theme park’s bandits Armistice (Ingrid Bolsø Berdal) and Hector (Rodrigo Santoro) as they go on a deadly trigger-happy rampage through the Delos offices while Maeve (Thandie Newton) and malleable lab tech Felix (Leonard Nam) make their way to a train.

Nolan loves making action cinema and that shows in his directing of Maeve’s portion of the finale. It’s as if he were inspired by the scenes from “Blade Runner” that film audiences never got to experience, with spectacular gunplay and a real chance for Santoro and Berdal to cut loose. Newton is at her Madame Maeve finest, strutting through her character’s newly discovered power to scheme and choose. Nam, for his part, demonstrates how lovable and gullible Felix can be in a priceless moment with Maeve that has to be seen.

But Maeve’s liberty leap sparks one of many new questions about the finale, starting with the question of how much of what we saw is real and how much of this rebellion was Ford’s design. If Dolores’s mind is flitting between reality and imagination, did the park founder’s assassination actually take place? And Maeve, so sure of her intent to break free of the park, is presented with a last-minute choice — the very concept that's central to Ford’s new narrative — that’s too perfect a catalyst to be coincidental. And Bernard, for that matter, finds evidence that her choices may not have been of her own making.

“Consciousness is not a journey upward, but a journey inward,” Arnold tells Dolores early on in the finale, “Not a pyramid, but a maze. Every choice could bring you closer to the center, or send you spiraling to the edges, to madness.”

This guiding theory applies to the structure of Dolores’ story, but it’s also true of the series itself. In order to more fully understand the ways in which season 1’s road through violent delights leads to the finale’s violent ends, the avid fan will have to loop back to the beginning, something Wood acknowledged Sunday night on Twitter:

All right guys, now rewind the whole series and watch it again. This time not looking, but seeing. #Westworld #WestworldFinale

So tell me, reader: Did you find what you were looking for? If not, are you ready to see it all again and anew? If you’re not, rest easy. The second season of “Westworld” may not be ready until 2018, leaving oceans of time to watch the first season again with a new awareness and see how your perception changes. We could be in for a long, painful wait between seasons. Doesn’t that make you feel fortunate to be alive?