What's the GOP fighting for in trying to kill the recounts? Donald Trump's massive but fragile ego

Odds that Jill Stein's recount can change the election results are zero, yet they threaten Trump’s bloated pride 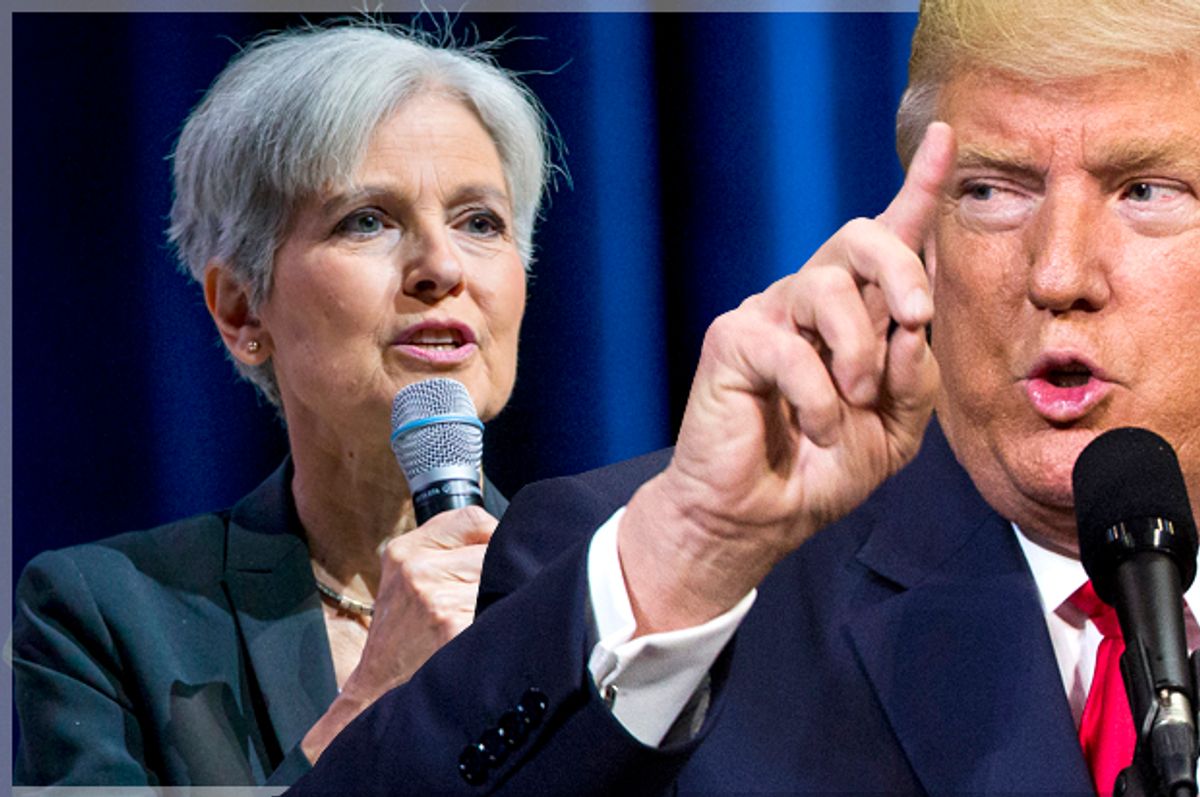 To hear Donald Trump’s defenders tell it, you might think the vote recounts either proposed or underway in Michigan, Wisconsin and Pennsylvania are the worst threats to democracy since Phillip II marched on Athens.

Trump's lawyers and surrogates in all three states are using every means at their disposal to shut down the recounts, while planting the idea among the general public that they are illegitimate assaults on American democracy.

In Pennsylvania, for example, lawyers representing Trump said Green Party candidate Jill Stein, who requested the recounts, is “bringing mayhem” to the elections, as if the state needs to be placed under martial law until the process is finished.

In Michigan, state Attorney General Bob Schuette, while filing a lawsuit to stop the recount, called it “a dilatory and frivolous request” that could “silence all Michigan votes for President” if it can’t be completed in time to certify the state’s electors on Dec. 13. Michigan’s state GOP chairwoman, Ronna McDaniel, who happens to be the niece of Mitt Romney, called the recount request a “temper tantrum . . . putting the participation of every single Michigan voter in jeopardy, for no reason, at an exorbitant cost to the Michigan taxpayers.”

The hilarity of complaining about Michigan’s voters’ right to have their voices heard — in an election in which the winner’s victory essentially required the disenfranchisement of a majority of voters nationwide — cannot be overlooked. But that’s another column for another time.

The larger question is, Why are Donald Trump and his allies expending so much energy to shut down these recounts?

It's easy to dismiss Stein’s efforts here as a publicity and fundraising effort for the Green Party, no matter how much she couches it in high-minded rhetoric about “ensuring the integrity and accuracy of the vote.” But whatever Stein’s motivation, one thing the recounts are not about is changing the results of the election. With no real, hard evidence of fraud or tampering with ballots or voting machines, the chances are just about nil that recounts will flip 80,000 votes across three states to Hillary Clinton’s column and thus hand her those states’ electors and the victory. And if the recount falls short in one of those states, there are not enough electoral votes in any combination of the others that puts Clinton over the top.

At worst, the recounts will result in some very minor adjustments to the nationwide popular vote total. In an election where the two major-party candidates split about 128 million votes, a few hundred or a few thousand votes moving from one column to the other doesn’t even rise to the level of a statistical error.

In other words, Trump wins nothing from shutting down the recounts. If anything, as Scott Lemieux argued a few days ago for Lawyers, Guns and Money, the recounts are more likely to help Trump by showing that the election was in fact on the up and up, thereby validating the butternut squash-colored menace’s Electoral College victory.

In fact, one would think if Trump really were concerned about 3 million illegal immigrants having voted, he and his surrogates would be calling for recounts and vote audits themselves, in order to ratify his election’s legitimacy —particularly in California, a state Trump claims he could have won if he'd felt like it.

There are two reasons conservatives are instead working so hard to shut down the recounts. The first is to service Trump’s monstrous and insatiable ego. The thin-skinned egotist predicated much of his presidential campaign on the idea that he is a winner and all his opponents are losers. Which is why it seems to gall him that he lost the popular vote, if his whining about it on Twitter last week is any indication.

To top it off, not only did a majority of the voters nationwide not vote for Trump, but they also preferred a woman. Which must gall this misogynistic creep who seems mostly to judge a woman’s value based on her looks and willingness to keep quiet when he assaults her.

It is a sign of Trump’s insecurity about his victory that instead of supporting recounts and audits that would legitimize it, he is throwing temper tantrums about the voting results. His vice president and chief of staff, among others, were on national television this past weekend pushing the “3 million illegal votes” lie in order to soothe him, while his Rust Belt minions try to shut down the recounts.

The second reason for shutting down the recounts is the longtime right-wing effort to delegitimize any and all opposition. It is a happy coincidence for these voter-suppression efforts that they have found their ultimate avatar in Donald Trump. State legislatures are already trying to ram through more voter suppression laws. These will be disguised as efforts to make voting “fair,” with Trump’s popular vote loss — attributed, of course, to "illegal" votes — used as prima facie evidence of the justness and rightness of the cause.

There is a price to be paid for constantly assuaging the insecurities of a volatile leader who has the temperament of an undisciplined toddler. It will be the disenfranchisement of our nation’s most vulnerable voters — and long term, all of us.