Donald Trump's Boeing mess: Why did Trump blast Air Force One on Twitter?

Trump caused stock market chaos, remarkably just after a report came out that was unflattering to him 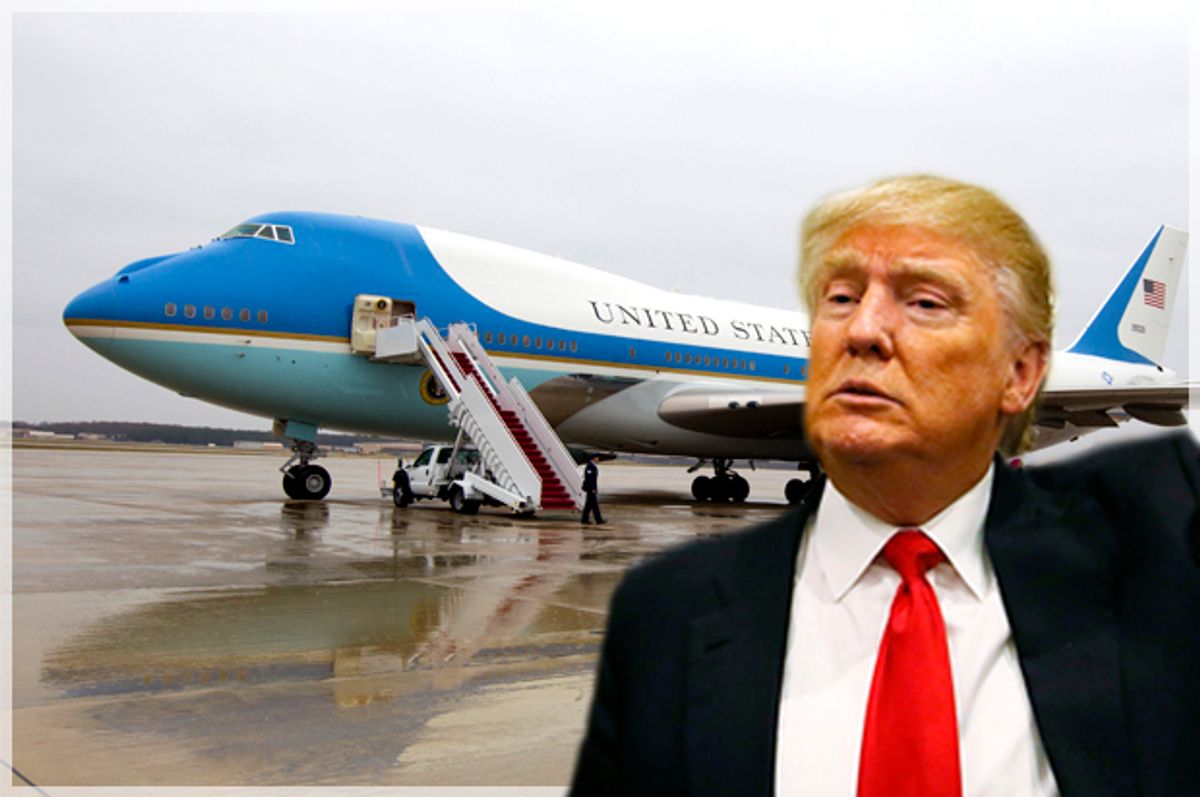 One of Donald Trump's tweets has held the morning news cycle hostage, caused the stocks of a major multi-national corporation to drop and forced the United States Air Force to issue a statement defending Air Force One.

Seemingly out of the blue Tuesday morning, the president-elect tweeted a call to cancel Boeing's contract for a new Air Force One plane:

Trump, who made a campaign promise to target “waste, fraud and abuse” in government spending, said "the plane is totally out of control." Trump told reporters outside of Trump Tower "It’s going to be over $4 billion for Air Force One program, and I think it’s ridiculous. I think Boeing is doing a little bit of a number. We want Boeing to make a lot of money, but not that much money.”

Trump on Boeing/Air Force One tweet: "The plane is totally out of control...we want Boeing to make a lot of money, but not that much money" pic.twitter.com/OnEuw8hfUM

Boeing stocks slipped in premarket trading after Trump's tweet and continued to dip in early trading, falling 0.9 percent to $150.90. Trump used to own stock in Boeing, but reportedly sold all of his stock in June.

"We are currently under contract for $170 million to help determine the capabilities of these complex military aircraft that serve the unique requirements of the President of the United States," the statement said. "We look forward to working with the US Air Force on subsequent phases of the program allowing us to deliver the best planes for the President at the best value for the American taxpayer."

The New York Times reported last October that the Air Force expected the development of two new Air Force One planes to require at least $102 million in the coming fiscal year and $3 billion over the next five years.

Aside from the troubling prospect that the president-elect is explicitly selecting individual companies to either win (Carrier) or lose (Boeing) under a Trump administration, his decision to go after Boeing Monday is rather curious.

Trump spokesman Jason Miller explained in a call to reporters that Trump plans to closely examine the Pentagon’s budget and look for areas where he can find savings.

But instead of tweeting about the Washington Post's blockbuster report revealing that the Pentagon buried a report that found $125 billion in waste, Trump appeared trigged by a Chicago Tribune article citing Boeing's CEO's concerns with Trump's anti-China bluster.

"Last year, we delivered 495 737s from our factory in Renton, Washington, to customers around the world. One in every three of those 737s were bound for China. And about a quarter of all our airplane deliveries — including wide bodies such as the 787 Dreamliner, 777 and 747 — were bound for Chinese customers. This phenomenon would have been unimaginable when I started at the company in 1985," Muilenburg boasted.

Following Trump's controversial call with the Taiwanese leader and a series of tweets over the weekend, the Tribune's Reed was prompted to note:

The brain trust at Boeing, among the city's largest companies and a global aerospace and defense powerhouse, must cringe every time President-elect Donald Trump riffs on foreign policy, especially when it comes to dealing with China.

Of course, the punchline here is that Donald Trump will have nothing to do with the future of Air Force One.
The secretary of the Air Force, Deborah Lee James, pointed out to Politico that the new fleet is now only in the research and development phase and is not scheduled to be ready for another decade, after Trump is already out of office.
"It will be the president after the next president who actually flies on this Air Force One," she said.