Financial stress looks too much like PTSD. In the U.S., the stress is all too common 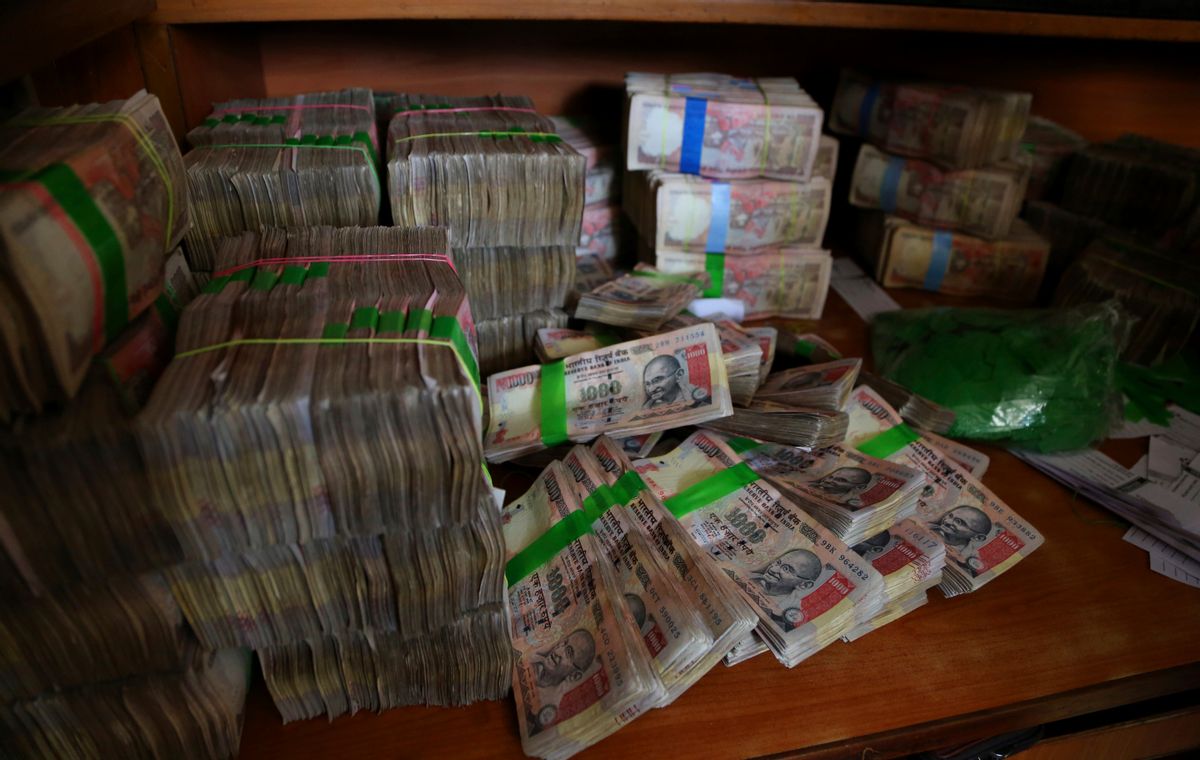 FILE - In this Nov. 10, 2016 file photo, discontinued Indian currency notes of 1,000 denomination are seen after they were deposited by people at a bank in Bangalore, India. Indian prime minister Narendra Modi, in his Nov. 8 televised address, announced the demonetization of India’s 500 and 1,000-rupee notes, which made up 86 percent of the country’s currency. There are doubts about whether the demonetization drive will truly make an impact on corruption and tax evasion. India’s underground economy is so big it accounts for up to a quarter of the country’s gross domestic product. And many of those possessing piles of black money have come up with ways to save much of it without drawing government attention. (AP)
--

Distorted thoughts, emotional distress, and the body under constant siege by toxic stress hormones. These symptoms are just a handful that might be attributed to Post-Traumatic Stress Disorder (PTSD). Remarkably, we have found that another type of trauma, Acute Financial Stress (AFS), results in the same cluster of symptoms as PTSD. It may seem hard to understand the impact of financial stress and why it impacts the brain so intensely, but in fact, AFS is not a new phenomenon in America.

Most of us have no personal frame of reference for the time in American history widely accepted as one of the most stressful we’ve ever faced as a country. In 1929, there was no safety net whatsoever. Over 4.5 million Americans were left to live on the streets and one in four working people were unemployed. Thousands of banks closed, leaving members waiting years for the prospect of any reimbursement of their deposits. The average American family farm had an annual income of $400. Hope was in very short supply, replaced with desperation and fear at a vast scale. Suicide rates skyrocketed, with 1933 seeing the highest numbers ever recorded, as many of the “new poor” came to the decision that no future was more appealing than what seemed to await them.

Talk to survivors of this era and the experience takes on a depth beyond what the statistics can provide. Both of my parents, Richard and Sara, were born four years before the crash, and are now relatively healthy 91-year-olds. Sara spent the Great Depression safely ensconced with her mom and dad, seven sisters and a baby brother on their largely self-sufficient farm amidst a collectivistic Mennonite community. If her father ever had difficulty putting food on their table, she and her sisters would have been the last to know.

But Richard lived in a different world, all of ten miles away. His father died in the middle of the Great Depression from a brain tumor, leaving my grandmother to raise seven children alone during a time when many two-parent families were unable to stay afloat. My father’s stories tell of penury and the unimaginable stress borne of protracted uncertainty: endless days spent in the fields trying to coax enough produce out of a small farm to make a living, getting up in the middle of the night to go to market to try to sell food to people who desperately needed it, the most desperate with the least ability to pay. Everyone was guarded and hard, everyone was a potential thief, increasingly so as time wore on and it became clear there would be no quick fix. You might say it was the dawn of Acute Financial Stress.

Everything old is new again

Slipping through the cracks today may look different, but the similarities in the outcome suggest there may be more parallels than we care to admit. From 1999 to 2013, we’ve seen that life spans are shortening, not increasing, and it’s taken scientists by surprise. It appears that financial stress is killing us on par with the Great Depression, and there’s data to prove it. This trend is impacting one subset of Americans the most: middle-aged whites.

While mortality statistics for blacks and Hispanics have always reflected a different reality than for white Americans, this new data is flattening the life-expectancy differences that we’ve seen among different ethnic groups for years. One study using data from the Centers for Disease Control and Prevention tells a profound story impacting a sizable segment of the population. If the mortality rate had stayed at 1998 levels just for whites aged 45 to 54, there would have been 96,000 fewer deaths from 1999 to 2013 and 7,000 fewer in 2013 alone. When we dive deeper into the data and segment it by the causes of death, this data turns from surprising to deeply alarming, warning us that something is seriously wrong.

The cause of death that’s risen the most dramatically over this 14-year period is “poisoning,” defined as an overdose of drugs and/or alcohol, with opiate use leading the pack. Unfortunately, while the stress and pain relief of opiate use is immediate, recent animal studies indicate long-term use decreases stress resistance, as these medications become less effective over time. Alcohol follows a similar pattern, leading users to need more.

Following overdoses, the largest rise in all causes of mortality is suicide, followed by liver disease/cirrhosis and finally, diabetes. When the researchers consider just overdoses, suicides and alcoholism, deaths among whites from these causes have increased significantly across all ages from 18 to 65.

The causes proposed for this rise in preventable and premature death range widely: increased levels of physical pain, unemployment, decreased physical health and an increase in mental illness are all considered. While this is happening in the context of one of the worst financial upheavals our country has ever experienced, there hasn’t been an effort to systematically link this directly to financial stress or the PTSD-like condition of Acute Financial Stress.

Another study focusing on alcohol use during the Great Recession of 2008-2009 reports the overall alcohol consumption rate increased among people 25 to 34 and 55 to 59 due to binge drinking. Not coincidentally, these two groups are very sensitive to the financial stress of unemployment. When considering the collapse of our economy it’s easy to speculate that stress levels have gone through the roof for these age groups, the first early in their work life and the latter approaching retirement age. Essentially, there’s no way into the job market and there’s no way out of it.

Our national study of Acute Financial Stress revealed that AFS is more prevalent in those who meet the criteria for poverty (less $30,000 yr/household income) and less so for those in the top income bracket identified (more than $200,000). Yet, while more common in lower income households, AFS can be found in all income brackets and at indistinguishable rates in households whose annual income ranges from $30,000 to $199,000.

The general rhetoric in America before the Great Depression promoted universal prosperity for everyone who was capable and competent. It was during the 1928 election that Herbert Hoover championed the slogan, “A chicken in every pot and a car in every garage.” This optimism morphed into expectation and played a large role in the loss of hope that underlies the rise in suicide during the Great Depression. When confronted with the harsh realities of unemployment and the need to find hope in more than material dreams, many people were unable to find the internal resources needed to cope with the stress.

Especially in light of the recent election, we know that Americans are again finding the world changing around them and showing signs of being unable to manage these changes mentally, emotionally, and physically. If income alone were the defining factor in who develops resilience in the face of acute financial stress, one would expect those living at the bottom of the economic spectrum would be most likely to succumb to addiction, diabetes and suicide at higher rates than those at the top. Countering this logic, most data points to the fact that increases in these outcomes are largest among the middle class for reasons we are still working to untangle.

A recent analysis by the Economist, for example, found that, “The data suggest that the ill may have been particularly susceptible to Mr. Trump’s message. According to our model, if diabetes were just 7% less prevalent in Michigan, Mr. Trump would have gained 0.3 fewer percentage points there, enough to swing the state back to the Democrats. Similarly, if an additional 8% of people in Pennsylvania engaged in regular physical activity, and heavy drinking in Wisconsin were 5% lower, Mrs. Clinton would be set to enter the white House.”

Moving forward with my own research, I can’t help but think about the power of hope to change this entire equation. I don’t mean to downplay the seriousness of the economic challenges so many are facing, often for the first time, but rather I look to the effects of stress and hopelessness on the brain’s functions as a pathway forward.