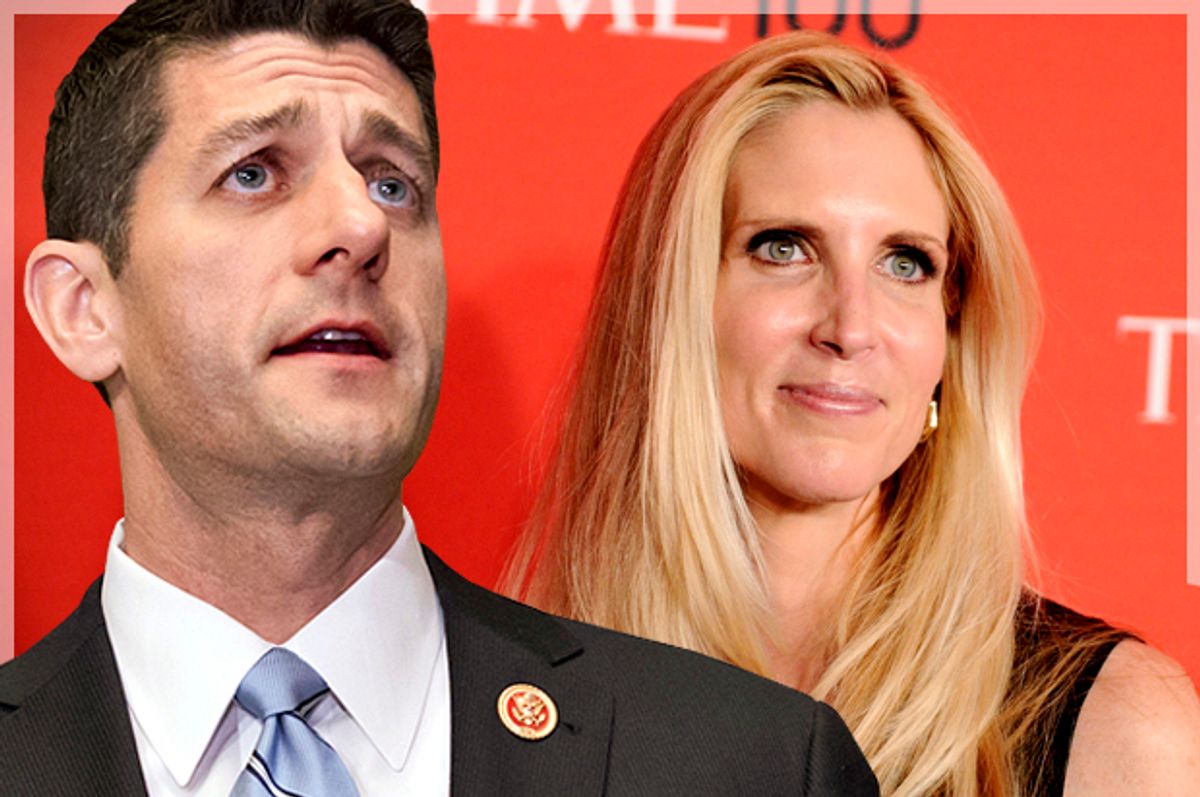 Continuing with the metaphor of the GOP as the dog that finally caught the car and now has no idea what to do with it, Republicans in Congress seem to be discovering that — whoops! — their agenda might not line up with that of Donald Trump after all. At the same time, conservatives who supported Trump are discovering that — whoops! — they helped enable a Congress full of disingenuous liars to use Trump’s election as cover to make all sorts of changes that the public opposes.

With Trump’s inauguration still more than six weeks away, there is plenty of time for the GOP to paper over the cracks in its coalition. But if liberals and Democrats are paying attention, this might help them strategize about how to go about fighting the Republican agenda for the next few years beyond just repeating the “just say no to everything” method the GOP employed during the Obama administration. Even if they go that route, because of their minority status in both houses Democrats will need to peel off some Republicans to vote with them, while keeping their own coalition intact.

In the Senate, in particular, that might be difficult with conservative-leaning Democrats like Heidi Heitkamp of North Dakota and Joe Manchin of West Virginia facing tough re-election battles in 2018. Both of these senators have already shown a willingness to consider working with Trump and the Republican majority.

Let’s start with the repeal of Obamacare. Already, Republican senators have signaled that they may not be willing to go along with the “repeal and delay” strategy, whereby Congress would pass a repeal early in 2017 but keep the law in place for three years, until the GOP can craft a replacement.

Resistance to this idea has been coming from from Sen. Lamar Alexander, R-Tenn., who chairs the Senate's health committee through which any Obamacare replacement would have to pass. Sen. Susan Collins, R-Maine, also announced her reservations about the idea, telling the Portland Press Herald:

[H]er “number one” goal for any ACA repeal effort would be to protect people who have purchased Affordable Care Act marketplace insurance. . . .

“You can’t just drop insurance for 84,000 people,” Collins said, referring to people who have signed up for ACA insurance in Maine.

Granted these are small cracks in the GOP front but the comments are still more reasonable and humane than anything we have seen out of Republicans on this issue since 2009.

Collins has also expressed opposition to House Speaker Paul Ryan’s plan to lump repealing Medicare in with the Obamacare rollback. She is not the only senator who doesn’t share his zeal to force older Americans to choose between health care and eating cat food. More important, prominent conservative activists may also throw a stink about it.

For example, Ann Coulter is very, very upset that Congress might spend its time working on Medicare repeal. Granted, she’s upset because a fight over Medicare would only distract Trump from rounding up and expelling 11 million brown people from the country. But she is correct to say that Medicare repeal was not an issue during the presidential campaign, except to the extent that Trump said he wanted to protect the program.

Is it possible that Ryan will be so zealous to push through Medicare repeal that he bogs down Congress and the Trump administration in that fight, leaving them with less attention to focus on building a wall and deporting every illegal immigrant they can find? It depends partly on how committed Ryan is to enacting his Ayn Rand-themed fantasy, how much resistance he gets from the Republican Party’s base and whether the Trump White House lets itself be distracted. There is a good chance of that last one happening, considering that it will be an organization run by Donald Trump.

There is also the issue of Trump’s plan to slap tariffs on products that American companies manufacture in overseas factories and import into the country. To the surprise of absolutely no one who is familiar with conservatives and economics, House Majority Leader Kevin McCarthy on Monday tried to throw cold water on the idea.

Asked if Trump’s tariff plan made him uneasy, McCarthy merely added: “I don’t want to get into some kind of trade war. . . . I think creating an incentive where you have a tax structure [that's attractive to companies] in America, that means lower corporate taxes, you won’t have” companies leaving.

During the campaign, the GOP was able to hide the rift between an establishment that embraces free trade and a presidential candidate with a mercantilism-on-steroids approach. But now that Trump has an opportunity to slap a tariff on imported goods, even if it’s not the 35 percent he has long promised, there is an opportunity for Democrats to drive a wedge between the two sides, if they want.

Of course, Trump could also back off the tariff idea altogether, as he seemed to do with the deal he brokered with Carrier last week for the company to slightly scale back the number of jobs it's shipping to its new plant in Mexico. But the president individually negotiating with companies one by one is not a long-term strategy for creating a lasting policy. If he and the GOP are serious about passing bills, they will have to negotiate about this.

The most likely outcome is that Trump will abandon tariffs when he discovers it could hurt his own business. Or else he will lose interest quickly and the free traders running Congress will be able to let the idea die. That would really be the ideal outcome for all of Trump’s policy ideas, including the plan for Obamacare repeal. But finding cracks in the GOP coalition to exploit is a safer strategy than just having hope.