Iran president: Donald Trump won't be able to "tear up" the nuclear deal 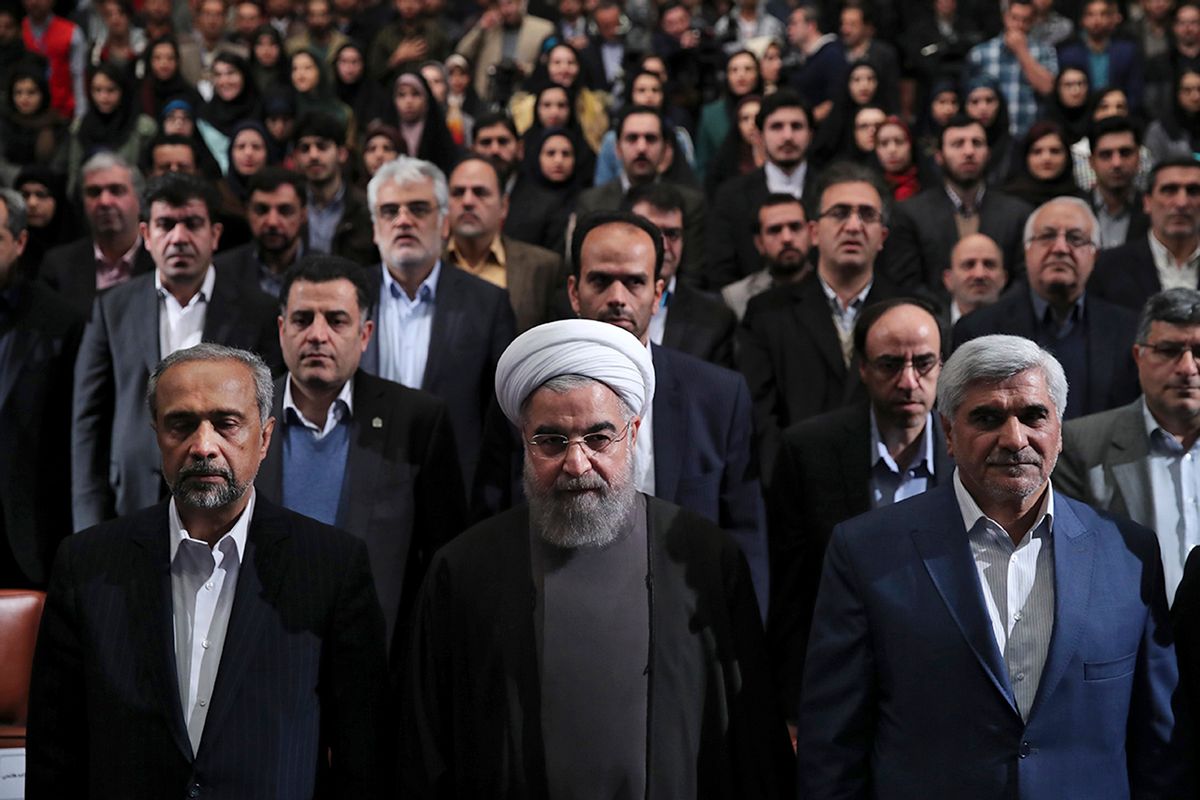 In this photo released by official website of the office of the Iranian Presidency, President Hassan Rouhani, center, Science Minister Mohammad Farhadi, right, and head of the President's office Mohammad Nahavandian, left, listen to the national anthem at the start of a ceremony marking Student Day at Tehran University in Tehran, Iran, Tuesday, Dec. 6, 2016. Rouhani said Tuesday his country will not allow incoming U.S. President Donald Trump to "tear up" Tehran's landmark nuclear deal with world powers. His remarks underscore Iranian leaders' attempts to calm concerns over the future of the deal in the wake of Trump's election. (Iranian Presidency Office via AP) (AP)
--

TEHRAN, Iran — Iran's president said on Tuesday that his country will not allow incoming U.S. President Donald Trump to "tear up" Iran's landmark nuclear deal with world powers and also warned Tehran will react to any extension of American sanctions.

The comments by Hassan Rouhani came during a speech at the University of Tehran commemorating the killings of Iranian students protesting a visit by then-U.S. Vice President Richard Nixon in 1953.

Rouhani's remarks show the high-wire stakes he faces after Trump's inauguration in trying to defend the deal struck by his moderate administration. The timing — during an annual remembrance of the students' killing at the hands of the U.S.-backed Shah Reza Pahlavi's security forces — also shows the internal challenges he faces from hard-liners already suspicious of America's intentions.

"The U.S. is our enemy," Rouhani said. "They want to put pressure on us as much as they can."

Rouhani never mentioned Trump by name in his speech, though he prefaced his remarks with noting that "some man ... elected in the U.S."

On the campaign trail, Trump called the multi-nation deal "catastrophic" and vowed to renegotiate it, without explaining how.

Rouhani also warned Iran "will show a reaction" if outgoing President Barack Obama signs a law extending some of America's sanctions authority by 10 years. The law, first passed by Congress in 1996 and renewed several times since then, allows the U.S. to sanction companies for doing business with Iran.

Rouhani has described extending the sanctions as a violation of the nuclear deal. The White House deemed the bill unnecessary but said it didn't violate the international accord.