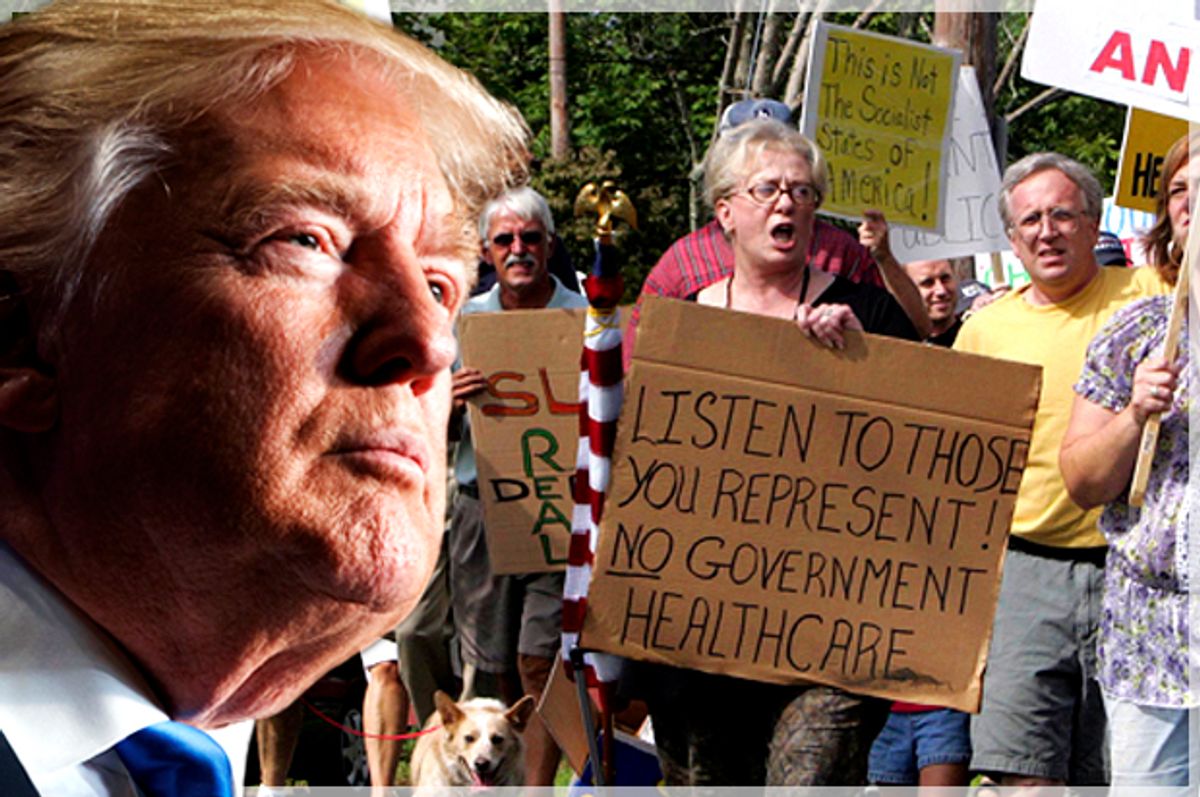 Republicans recognize they have overcome one major hurdle in their fight to gut President Obama's hallmark health insurance law: After all they have won control of both chambers of Congress and the White House. But their battle over Obamacare is morphing into what now threatens to become a serious GOP civil war.

The battle lines are drawn between the Republican leaders in Congress who now want to delay a repeal until after the 2018 election and far-right congresspeople who want to eliminate the much maligned health care legislation right away.

Shortly after his stunning electoral upset, President-elect Donald Trump appeared to walk back his most ambitious campaign promise:  full repeal of Obamacare within his first 100 days in office. Trump told The Wall Street Journal he would like to keep popular sections of the law, for example, that require insurers to cover people with preexisting conditions as well as the part that allows for children to remain on their parents’ policies until age 26.

Congressional Republican leaders followed up on Trump's sudden shift away from a hurried repeal of Obamacare by warning that replacing it with something else could take years. Politico reported last week that Republican lawmakers have been considering immediately repealing the law but delaying the ushering in of its replacement for three years:

They’re crossing their fingers that the delay will help them get their own house in order, as well as pressure a handful of Senate Democrats — who would likely be needed to pass replacement legislation — to come onboard before the clock runs out and 20 million Americans lose their health insurance. The idea is to satisfy conservative critics who want President Barack Obama’s signature initiative gone now, but reassure Americans that Republicans won’t upend the entire health care system without a viable alternative that preserves the law’s popular provisions.

"It will clearly take time," House Speaker Paul Ryan told the Milwaukee Sentinel Journal on Monday. "It took them about six years to stand up Obamacare. It’s not going to be replaced come next football season."

Ryan echoed the sudden caution by Senate Majority Leader Mitch McConnell, who reminded Republican over the weekend, "You can't just snap your fingers and go from where we are today to where we're headed." McConnell warned on Saturday that a repeal of the law "has to be done carefully. It has to be done in a phased-in way over a period of time."

McConnell's Whip, Texas Republican John Cornyn got more specific. "We’re talking about a three-year transition now. . . . People are being understandably cautious to make sure nobody's dropped through the cracks," he told Politico.

Meanwhile the ultra-conservative House Freedom Caucus, which some see as drawing inspiration from the Tea Party Caucus of 2010, is gearing up for a fight, foreseeing a concerted effort by Trump and Republican leaders to dodge their promises to repeal and replace Obamacare in the new session.

Far-right North Carolina Congressman Mark Meadows, who was elected the next chairman of the House Freedom Caucus on Monday night, immediately told Politico that the GOP leadership's new stance on Obamacare is “the first big fight I see coming for the Freedom Caucus.”

He told Politico, "It should be repealed and replaced, and all of that should be done in the 115th Congress." Meadows said that any talk of delay until after the 2018 elections, when Republicans hope to win Senate seats in more friendly terrain, "will meet with major resistance from Freedom Caucus members."

Contrary to the GOP leaders' plan to slow walk changes to the health insurance law, Meadows said his 40-member caucus wants to speed up the timing of the repeal.

The Koch brothers-founded conservative advocacy group FreedomWorks heralded Meadows' election with a statement calling for a swift repeal of Obamacare: "With majorities in both chambers of Congress and control the White House, Republicans cannot squander the opportunity before them to put America back on the right track," FreedomWorks CEO Adam Brandon said. "Now is the time for House Republican leaders to work with the House Freedom Caucus to pursue a bold, fiscally conservative policy agenda that repeals ObamaCare and replaces it with patient-centered alternatives."

Republican leaders in Congress are so committed to their stalling strategy that they've asked a federal appeals court to postpone action on the House GOP's Obamacare lawsuit against the Obama administration. On Monday, a three-judge panel of the United States Court of Appeals for the District of Columbia Circuit sided with House Republicans and delayed the next step of its 2014 lawsuit alleging that the federal government is unlawfully spending money on subsidies for out-of-pocket costs like deductibles and co-payments for low-income consumers without a congressional appropriation.The court put off the proceedings until Feb. 21 — well after Trump is sworn into office and is named the new defendant in the GOP case against Obamacare.

A recently released survey by the Kaiser Family Foundation illustrated just how reliant many red state residents are on those Obamacare subsidies. In Texas, 913,000 residents received an average of $271 a month, or $3 billion a year in all, helping to explain Sen. Cornyn's sudden hesitance to swiftly repeal Obamacare.

In an interesting turn of events, GOP leaders will likely have to rely on Trump to sell their plan to delay a full Obamacare repeal and replacement to Republican voters whose desire to fight the legislation in many ways gave rise to Trump's successful campaign for the presidency. A post-election survey released on Thursday by the nonpartisan Kaiser Family Foundation found that support for a full repeal of Obamacare from self-identified Republicans has decreased by double digits since Trump won the election last month.