After Hillary, women across the country are ready to run — but can they win?

Women angry over Hillary Clinton's defeat are ready to run for office. Can they get the money they need to triumph? 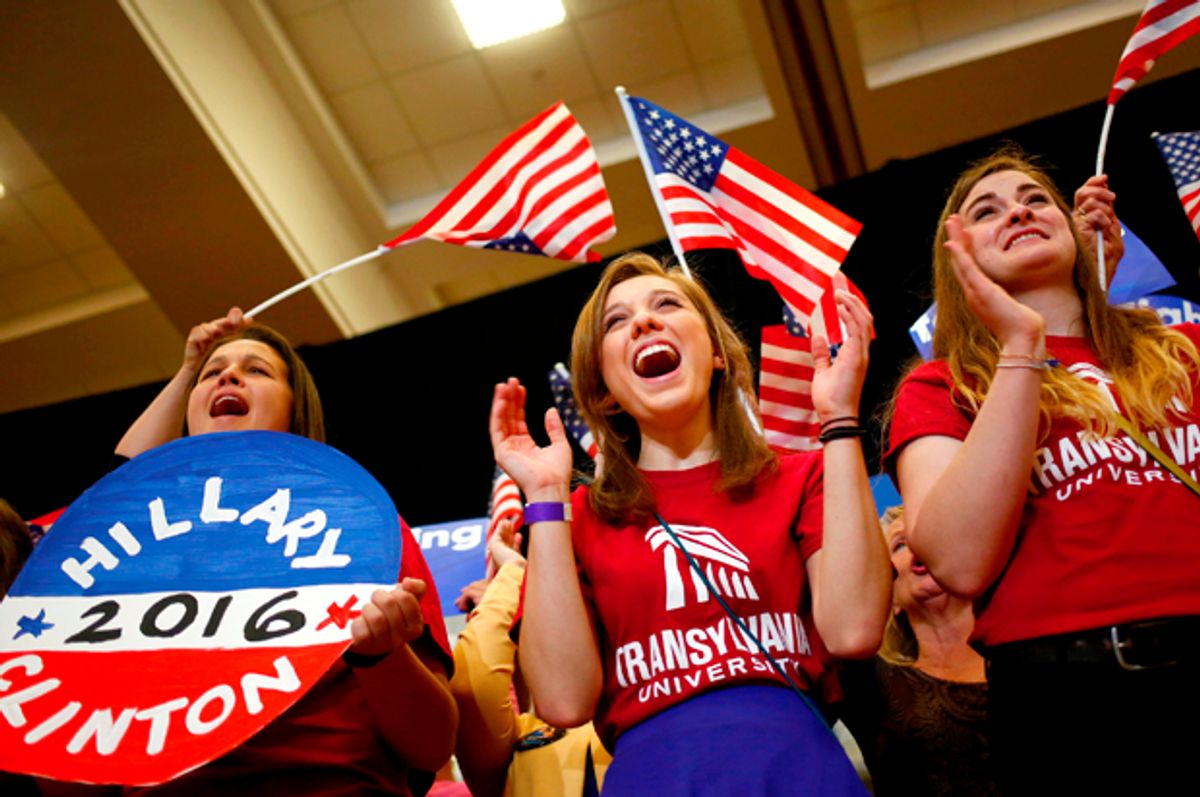 A month ago, most observers — even Republicans! — believed we would be inaugurating the first female president in January. But even though Hillary Clinton won the national popular vote by a margin that now exceeds 2.6 million ballots, it was not enough to secure the necessary victory in the Electoral College.

The woman who would be president lost in a campaign marked by stunning levels of misogyny, with mainstream media outlets getting caught up with the right-wing belief that a woman who has risen so high must have some dirty secret lurking in her emails. To add insult to injury, she lost to a man who literally bragged about sexually assaulting women.

With all this taken together, the message sent to American women couldn't be clearer: Stay in your place and let men monopolize the power or you'll be viciously smacked down with lies.

It would be understandable under the circumstances if the whole thing made women reluctant to run for office. Why bother, when our country is so sexist that a self-professed sexual assailant and obvious charlatan with no elected or appointed political work experience can beat an immensely qualified woman through a campaign of barely disguised sexist innuendo?

In a testament to the power of fed-up-ness, the opposite is happening.

“I don’t think the takeaway from this election is for women is how tough it is for women to run for office," said Andrea Dew Steele, the president of Emerge America. "It was that we, as women, need to step up, run for office and we need to take back our country," added Steele, whose organization offers training programs for women interested in running for office as Democrats.

According to Steele, Emerge America has seen a spike in interest from women who want to learn more about becoming candidates. Since the election more than 200 women have signed up with Emerge America's #WhySheRuns campaign. Only 35 women did  in the six weeks before the election. The group's state affiliates have seen a surge in interest as well. The California affiliate, for instance, was forced to reopen its application period to accommodate a surge of women seeking assistance and information.

Steele said women are “interested because [this election] was arguably the biggest slap in the face for the women’s movement since 1992," when during Clarence Thomas' Supreme Court confirmation hearings, the treatment of Anita Hill led to a surge of women showing interest in political careers. That wave of female power in turn led to 1992 being dubbed "The Year of the Woman" in politics.

Unfortunately, women still face a lot of obstacles when it comes to running for office.

“The only thing I continue to regret of course is that we didn’t have the moolah," said groundbreaking congresswoman Shirley Chisholm, after her historic 1972 run for the Democratic nomination. It's 44 years later, and female candidates are still struggling to get the moolah because the fundraising system is largely structured to benefit male candidates.

Common Cause, the Center for Responsive Politics and Representation 2020 joined together to publish a report, titled "Individual and PAC Giving to Women Candidates," which outlines the extent of the moolah problem. Its title is bland, but the report's findings expose how much the obstacles facing female candidates are baked into the political system.

When it comes to ordinary people giving small amounts of money to candidates, on an individual basis, gender doesn't play much of a role. If anything, small-money donors tend to prefer female candidates, perhaps because women are still relatively rare in politics and therefore tend to be more memorable.

“These PACs don’t want to give to candidates unless they’re viable or preferably guaranteed, basically a shoo-in," Sheila Krumholz, chief administrator for the Center for Responsive Politics, explained over the phone. "They don’t want to throw away money.”

That means incumbents, having already proved that they can win elections, have an advantage over challengers. Female incumbents are just as likely to get PAC money as male incumbents. But unsurprisingly, the majority of incumbents are men — 80 percent of the members of Congress are male — creating a vicious cycle where men get more money and power because they already had it in the first place.

Part of this is a question of perception, Krumholz suggested. “There’s still a lot of challenges [with people] seeing women as viable representatives and leaders," she said. “With each passing year that changes, but not as fast as people thought it would in 1992, the Year of the Woman.”

There are things that can be done to speed up progress, even after Clinton's maddening defeat. A simple step anyone can take, Steele argued, is to be on the lookout for women who might have what it takes as a political candidate and urge them to run for office.

“We need to be recruiting women because they don’t self-nominate like men," Steele said. “Women need to hear it from people they respect. They need to hear them say, 'You’re great; you should run for office.'”

Cynthia Richie Terrell, director of Representation 2020, argued that we also need systemic solutions. "Structural reforms to the recruitment process and voting systems are fueling efforts to elect more women to office in other countries," Terrell wrote by email, pointing out that, due to the lack of such reforms, "the U.S. now ranks behind 99 other nations in terms of women's representation" in politics.

"If we are to reach parity in the United States in our lifetimes, we must embrace and adopt the institutional strategies that are electing women around the world," she added.

Terrell advises PACs to go beyond good intentions and recommends that they "set targets for the number of women they recruit and support" and that those targets "should increase in each election cycle until parity is reached."

There's no doubt that Clinton's loss is a setback for women. Having a woman in the Oval Office would have expanded the sense of what is possible, making it easier for women to imagine themselves running and for donors to see women as viable candidates.

But anger is also a strong motivator. And the bitter unfairness of Clinton's defeat — the way that such a qualified woman was beaten by a man who probably couldn't tell you how a bill becomes a law — has made a lot of women angry. That eagerness to fight may turn into a wave of many more women running for office across the country.