Renewable energy is here to stay: The industry has grown up, and it’s too big to kill 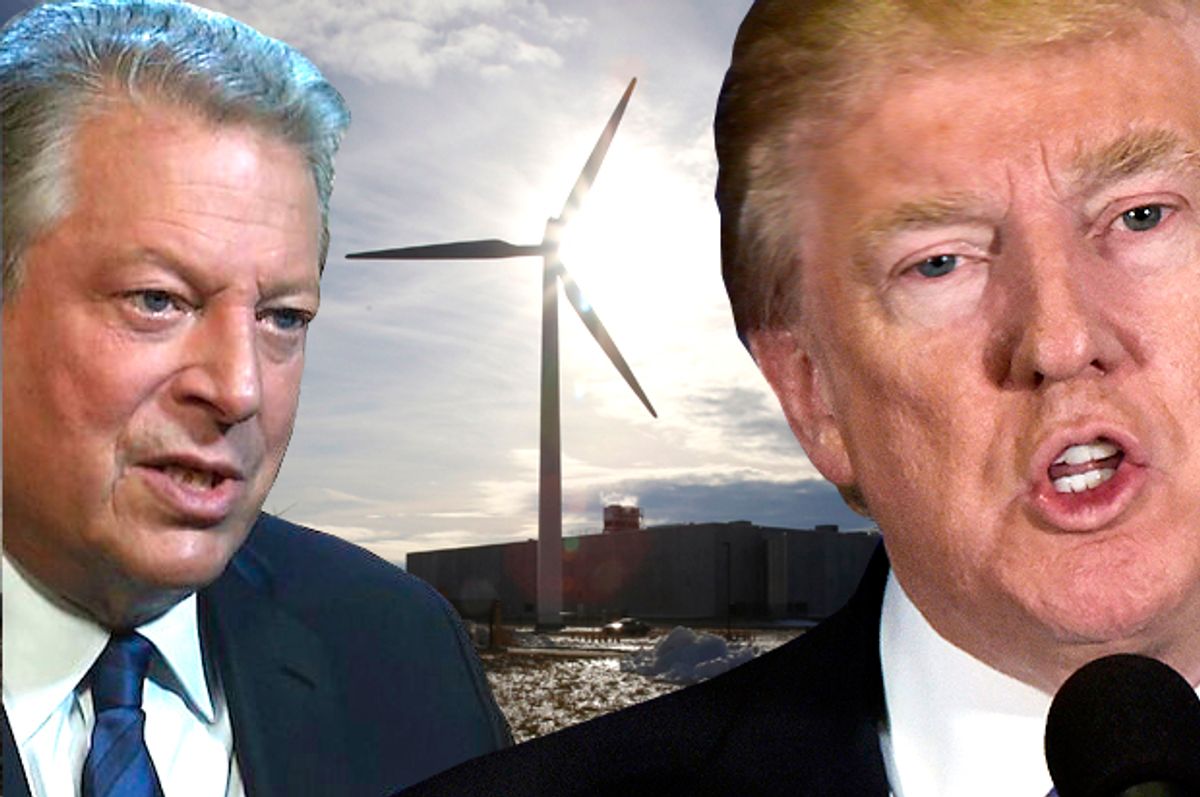 If you’re an American environmentalist, there’s a lot to be sober about these days. The crippling defeat of progressive politics in the November elections swept Republicans into Congress and that could help Trump fulfill his campaign promises to dismantle environmental policies established under the Obama administration, revive a dying U.S. coal industry and pull out of the 193-country Paris accord aimed at coordinating a reduction in global greenhouse gases.

The markets have reacted accordingly. Since the Republican victory in the Nov. 8 elections, investors have been dumping shares in renewable-energy companies and plying cash into mining interests. For example, shares in Vesta Wind Systems, the world’s top maker of wind turbines, have plunged nearly 19 percent since then, while stock in Glencore, one of the world’s largest coal producers, has risen 14 percent in the same period of time.

The markets are predicting Trump, who walked back his claim that climate change is a hoax perpetuated by the Chinese after the election, will nevertheless be a great booster of oil and gas interests while capping progress the country has made in developing fossil-fuel alternatives.

Good luck with that, say renewable energy analysts, who point to the immense and irreversible progress that's been made in the U.S. over the past decade toward much wider adoption of those alternatives. What was once a costly fringe part of the country’s energy sector is now mainstream as companies and state development officials have acknowledged that energy conservation and renewable sources are cost-effective job creators, not just a costly do-good big government effort.

“Even with a lack of continued implementation of the Clean Power Plan under the next administration, conversations at the state level have already started on this issue, and they’re considering new emerging technologies like power storage and distributed energy resources,” Jeffrey Cramer, a partner at the clean energy public policy consulting firm 38 North Solutions, told Salon.

The Clean Power Plan is an Obama administration initiative to reduce carbon pollution from power plants by installing carbon capture technology that greatly reduces harmful emissions but raises the cost of electricity generated by coal. Trump has pledged to eliminate it.

“There’s really not much out there from a federal policy perspective that could curtail the continued growth of the clean energy industry,” Cramer added.

And this is not just happening in liberal states like California and Massachusetts, Cramer said. Conservative bastions like North Carolina, Arizona and Texas are embracing wind power, and conservative groups are becoming more vocal about the need for Republicans to do something to counter the GOP's reputation as the political party that's an enemy of green-energy development. A Pew Research Center poll in October found overwhelming support for alternative energy infrastructure development, with 83 percent of conservative Republicans favoring solar installations, and 75 percent backing wind farms. Liberal Democrats favored both by more than 90 percent.

According to the U.S. Bureau of Labor Statistics, about 2.5 million people are employed in clean energy jobs, led by robust growth in solar energy work, which has seen a 20 percent jump in employment since 2012. Solar companies now employ about 300,000 people, more than the number of people working in oil, gas and coal extraction. Part of the reason for that is because hiring the oil and gas sector has seen a huge drop since the global oil glut sent prices plunging over the past two years, but regardless, these hiring numbers are significant.

“If the Trump administration does nothing, and leaves policy alone, they wouldn’t have to do anything to take credit for continued growth in the sector,” said Cramer.

That’s because the costs of developing more energy efficient power sources are falling. Coal costs $65 per megawatt hour (MWh) from a traditional coal power plant and $140 per MWh from a power plant with carbon-capture technology. But solar-derived electricity now runs about $79 per MWh compared with $125 per MWh in 2010, according to the Financial Times. Wind energy is by far the least expensive, costing $56 per MWh, or $34 per MWh with government subsidies.

“We’re in a very different place than where we were eight years ago,” John Rogers, a senior analyst in the climate and energy program at the Union of Concerned Scientists, told Salon.

Rogers pointed to a growing embrace of renewable energy in corporate America and among states seeking greater efficiencies and modern energy infrastructure.

This week, Google-owner Alphabet said by the end of next year it would derive all the company's global power needs from renewable energy sources, including the immense load required to keep its global network of power-hungry data centers purring.

“Over the last six years, the cost of wind and solar came down 60 percent and 80 percent, respectively, proving that renewables are increasingly becoming the lowest cost option,” the company said in its environmental report.

Indeed, the cost-effectiveness of renewable energy will make it much harder for any global-warming denying lawmakers backed by energy and transportation industries to reverse progress that has been made over the past decade.

President-elect Trump might understand this, regardless of his campaign rhetoric backing the coal industry. On Monday the president-elect met with former vice president Al Gore, a meeting that Gore described to reporters as “lengthy and very productive.” And in an interview at The New York Times on Nov. 22, Trump said he would keep an open mind about sustainable energy policy.

It’s possible that as a Republican, he has looked at the numbers and now realizes that promoting renewable energy is no longer just an ethical issue for environmentalists to embrace but rather a cost-effective measure that should be part of his proposed infrastructure-spending plans. While environmentalists have plenty to be alarmed about when it comes to stripping away progressive environmental standards, when it comes renewable and more efficient energy sources, the U.S. appears to be finally on track toward joining the rest of the modern world in embracing a greener mindset.