Lemonade is redefining insurance in 2020
Salon Marketplace
"Emma," the "Clueless" remake we deserve
Mary Elizabeth Williams
Trump criticizes Parasite's Oscar win
Matthew Rozsa
FILE - In this March 10, 2010, file photo, a 25-foot harbor patrol boat passes by the 399-foot U.S. Coast Guard icebreaker Polar Star as it sits moored at a dock in Seattle. The United States' last vessel capable of breaking through the heaviest ice of the Arctic Circle, and resupplying the U.S. polar research station there, is scheduled to leave San Francisco Bay on Tuesday, Nov. 11, 2014. While Russia and China have dozens of icebreakers, opposition in Congress to funding means the U.S. has just one heavy-duty one, already a decade past its decommissioning date. (AP Photo/Elaine Thompson, File) (AP)

In August of 2015, a large iceberg broke off from the floating section of Antarctica’s massive. While such an event is part of the natural life cycle of glaciers, this one was precipitated by an unusual rift in the middle of the ice that could point to a new mechanism for the collapse of this and potentially other glaciers, accelerating their contributions to global sea level rise.

The researchers think the rift was caused by the same warm ocean waters that have been spilling into the cavities below many Antarctic ice shelves, driven by changes in wind patterns potentially linked to the warming climate, and eating away at them from below. As the ice shelves have thinned, the glaciers have flowed more quickly to the sea, adding once land-bound ice to the ocean.

The waters under Pine Island Glacier’s ice shelf have warmed by up to 1 degree just since the 1990s, fueling a retreat that has already been described as “unstoppable.” If it destabilizes it could unleash the demise of a larger area of Antarctic ice that could add 10 to 13 feet to global sea levels over several hundred years. Such an influx would erase coastal areas off the map that are home to millions of people.

If this same force is fueling the rifts spotted by the researchers, it could lead to even faster iceberg calving and further speed up Pine Island Glacier’s march into the ocean.

Glaciers are massive rivers of ice that flow out to sea, just as rivers do. At the point where the ice meets the sea, it begins to float. That floating platform, called an ice shelf, buttresses the glacier and helps to regulate its speed.

Rifts naturally form along the edges of the ice shelf, “where the ice is getting all ripped apart” from contact with rock or slower-moving ice, Howat said. Those rifts can propagate across the ice shelf, eventually causing an iceberg to break off, or calve. This in turn causes the glacier to speed its flow, pushing more ice out to sea until the system eventually stabilizes again.

Calving is a natural part of this system, but can become a problem if multiple events happen in quick succession, too fast for the glacier to replace the ice being lost, and pushing more ice into the ocean, raising global sea levels.

In late 2014 and early 2015, Howat and his colleagues spotted the unusual rift when they were examining images taken by the Landsat 8 satellite, launched in 2013 and possessing a new capability, the ability to take photos in low light. In such photos, the low sun angle creates shadows that throw the surface of the ice into clearer relief. The images of Pine Island Glacier showed two parallel rifts that were peculiarly running across the middle of the ice shelf, instead of along its edges.

“We haven’t seen anything like this yet,” Howat said. “It definitely indicates that there’s big weaknesses in the center of the ice shelf.”

The study findings, detailed in the journal Geophysical Research Letters, are only one data point, Ken Mankoff, a Penn State glaciologist who wasn’t involved in the research, said, but “it highlights, in some ways, how little we know about the system.”

As 2015 wore on, the rifts were pushed forward by the glacier’s flow. In August, a frozen mixture of sea ice and icebergs that was helping to shore up the ice shelf “blew out,” as Howat put it, causing the more seaward rift to open up, calving off several icebergs from the front of the shelf.

Howat and his colleagues think the odd rifts were ultimately caused by the warm ocean waters invading the space beneath the ice shelf. A 2014 study in the journal Science estimated that waters in the area of Pine Island Glacier had warmed by about 0.4°-1°F since the 1990s, which seems small but is significant in glacial terms.

This warmer water both thins the ice shelf and pushes back the glacier’s grounding line, or the point where it begins to float. Because the bedrock below the Pine Island Glacier is below sea level and slopes down as it goes inland, the water can seep further in and expose thicker portions of ice to melt.

Previous research has suggested that the warm water intrusion follows a seasonal cycle, meaning the water under the ice shelf is warmer at some times of the year than at others. When the ice first hits the ocean at the grounding line, it melts according to the temperature of the water there.

Because the ice is constantly moving forward like a conveyor belt, periods when the ocean water is warmer create valleys in the underside of the ice shelf. The thinner ice sits lower in the water, creating mirroring valleys on the ice shelf’s surface.

While these valleys had been seen before, this is the first time one has been seen to lead to calving, Howat said.

What could be happening is that once these valleys form, “the warm water gets channeled there,” creating a runaway cycle of thinning, Howat said, and could eventually lead to cracks forming.

Howat and his team are currently keeping an eye on the second rift further inland, in anticipation of it following after its twin. “There’s going to be another iceberg here shortly,” he said. 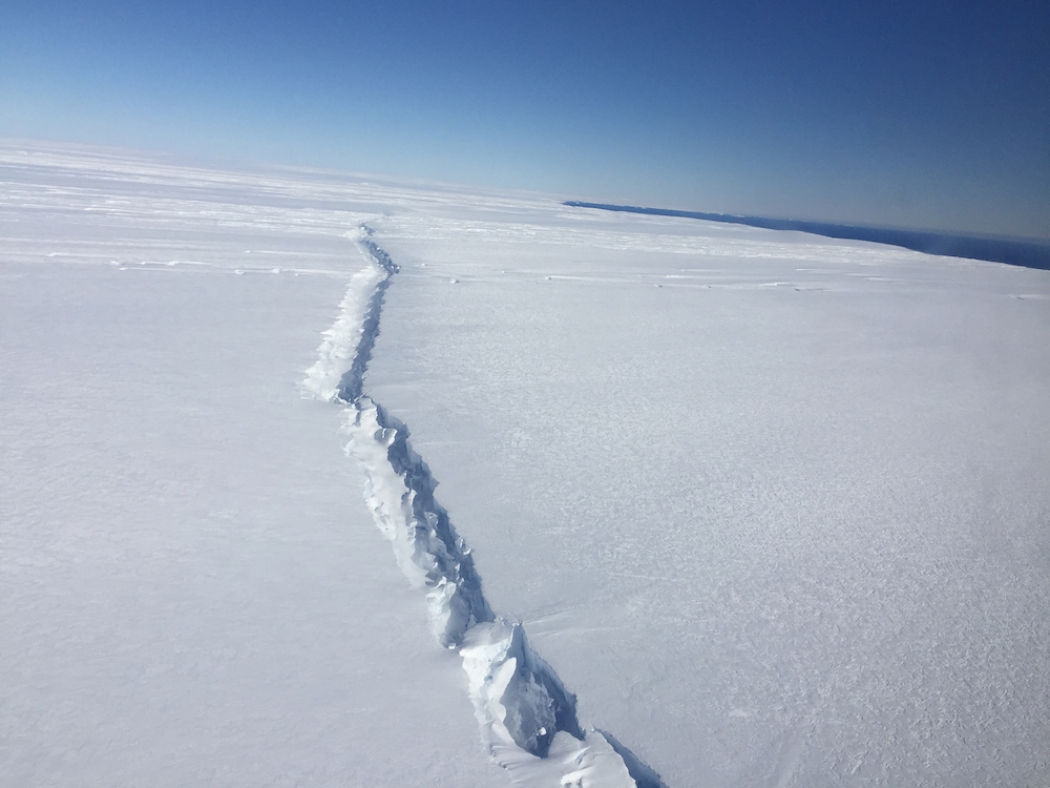 This rift, photographed during NASA's Operation IceBridge on Nov. 4, 2016, is the second to form in the center of the ice shelf in the past three years. The first resulted in an iceberg that broke off in 2015. Credit: NASA/Nathan Kurtz

NASA’s airborne IceBridge mission flew directly over it during its recent Antarctic campaign, gathering valuable data that could help Howat and others better understand how the rifts formed and evolved, though it will be several months before Howat can get his hands on it.

The key question for the future of Pine Island Glacier is whether rifts will keep forming in these valleys further and further inland. If they do, more and more icebergs could calve off at a quicker pace than is typical, diminishing the ice shelf and speeding the retreat of the glacier.

Or, as Howat put it, if this mechanism does continue like this, “then it’s going to be, ‘Sayonara, glacier.’”