Sexual harassment and “Last Tango in Paris”: The more things change for women in the workplace, the more they stay the same 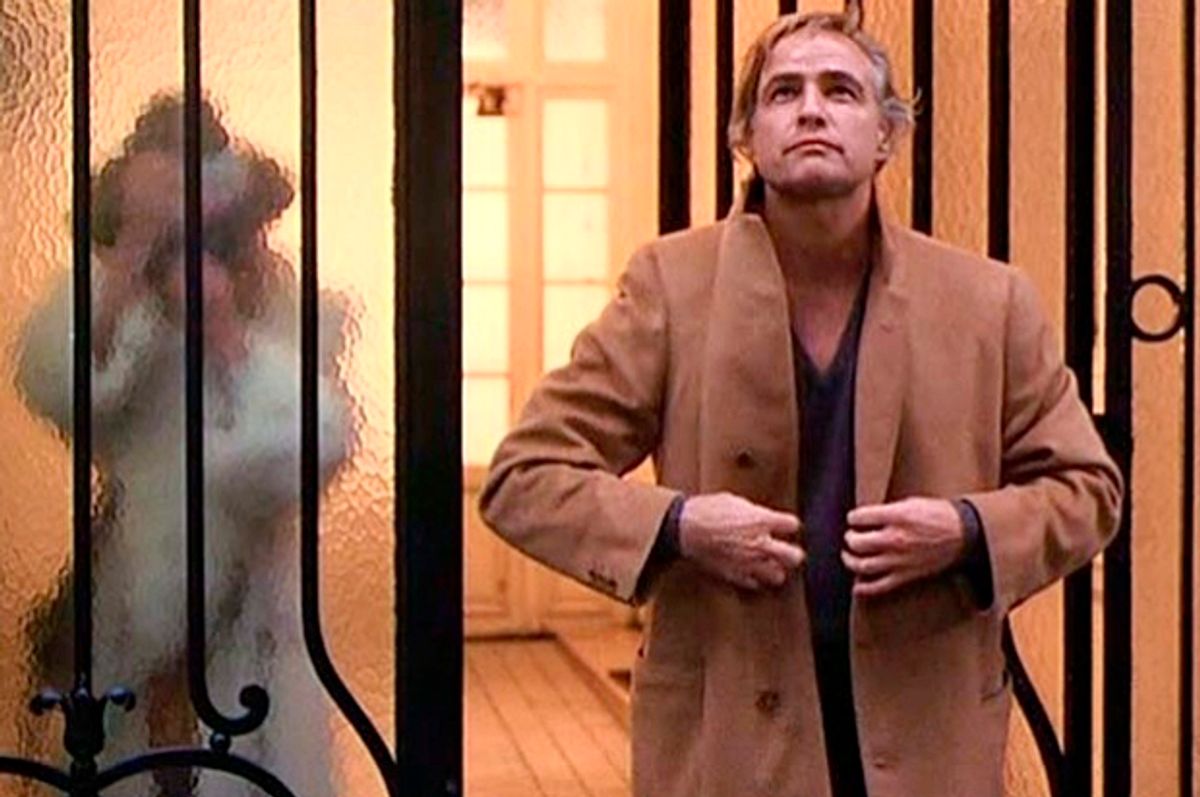 Maria Schneider only cooked with olive oil after filming “Last Tango in Paris.” A recent video of director Bernardo Bertolucci discussing the 1972 art house landmark, which co-starred Marlon Brando, might suggest why.

Perhaps the most infamous scene from “Tango” is one where Paul (Brando), a widower grieving the death of his wife, uses a stick of butter as lubricant in order to sexually assault Joanne (Schneider), an anonymous Parisian woman who becomes the object of his sexual obsession. Due to its depiction of anal rape, the film was so widely protested after its debut in U.S. cinemas that it was the subject of bomb threats. When “Last Tango in Paris” showed in New Jersey in 1973, The New York Times reported that an angry mob shouted “perverts” and “homos” at attendees entering the theater.

The film continues to spark controversy more than four decades after its release but for a different reason than its protesters intended. Bertolucci, who is also known for directing “The Conformist” and “The Last Emperor,” has raised eyebrows all over again for claiming during a 2013 interview that the scene was “nonconsensual.”

The scene was not in the original shooting script, as Bertolucci explained to the Cinemathèque Francaise, a renowned French film organization. The morning the crew was scheduled to film what was intended to be an explosive encounter between the May-December lovers, Bertolucci took Brando aside and discussed his idea of having him rape her with butter. According to the director, the pair did not tell Schneider, who was just 19 at the time of filming because Bertolucci “wanted her reaction as a girl, not as an actress.” He added, “I wanted her to react humiliated.”

Although these 3-year-old revelations generated a major outcry on social media over the weekend following other news reports — with celebrities like Jessica Chastain, Chris Evans and “Selma” director Ava DuVernay voicing their disgust — Schneider discussed them herself almost a decade ago. Schneider, who passed away in 2011 from cancer, told The Daily Mail in 2007 that she felt “a little raped, both by Brando and Bertolucci.”

There has been a great deal of confusion about how to talk about what happened on set. Were Bertolucci's words perhaps taken out of context? Following the backlash, the filmmaker claimed in a public statement that it was only the use of butter that was sprung on his actress at the last minute. OK, but if that was still done without her consent, was what transpired rape? As Schneider and Brando have maintained in interviews, the sex shown on screen was all simulated, so the answer to that question is perhaps fuzzy. Unfortunately, Schneider isn’t around to give her opinion.

The feelings, though, were absolutely real. Schneider’s director manipulated her into acting a scene that shows her being sexually humiliated, which amounts to a particularly flagrant case of sexual harassment. Schneider has said that she “should have called [her] lawyer or her agent” but didn’t because she was so young and felt like she had to do what she was told.

A number of actresses can likely relate to that situation. Workplace abuse in Hollywood has been extremely common for decades, due to a toxic culture of gender inequality that skews the balance of power in favor of men like Bertolucci and Brando.

The stars of “Good Girls Revolt,” an Amazon series that deals with these very subjects, claimed that sexism in Hollywood is “all over the place.” Actresses like Rose McGowan, Gwyneth Paltrow, Charlize Theron, Evan Rachel Wood, Ashley Judd and Dame Helen Mirren have claimed that they were assaulted by influential Hollywood power players who had the ability to kill their careers if they didn’t consent. Thandie Newton (“Westworld”), claimed that when she was just a young ingenue trying to make a name for herself, a producer filmed up her skirt during an audition and then screened the footage at private parties.

But what happened to Schneider took place in 1972, when terms like “rape culture” and “sexual harassment” weren't part of the vernacular. It’s difficult to speak up when you don’t have a language for it.

When “Last Tango in Paris” was being filmed, sexual harassment hadn’t yet become part of public discourse. The phrase wouldn’t make its first appearance in academic literature until two years later: In the 1974 report “The Saturn's Rings Phenomenon,” MIT researcher Mary P. Rowe discussed the “minutiae of sexism” often overlooked in the workplace simply because they are “such petty incidents that they may not even be identified, much less protested.”

“They are, however, important, like the dust and ice in Saturn’s rings, because, taken together, they constitute formidable barriers,” Rowe concluded.

It was a long road before those “petty incidents” were recognized for what they were.

The Supreme Court didn't rule that sexual harassment was illegal until 1986, when gender-based workplace abuse was deemed a violation of the Civil Rights Act of 1964. The case that brought sexual harassment to the court’s attention, Meritor Savings Bank v. Vinson, was extremely disturbing: Michelle Vinson, a teller at Meritor Savings Bank, charged that her boss, Sidney Taylor, pressured her into having intercourse 40 to 50 times. Taylor, who was also the vice president of the bank, threatened her life if she reported it.

This case, however, failed to spark a national dialogue on the subject of workplace harassment.

Women had to wait another five years for their Ferguson moment to bring this rampant problem to the fore.

In 1991 Anita Hill testified before Congress that judge Clarence Thomas, who was awaiting confirmation to sit on the Supreme Court bench, had behaved inappropriately while they worked together at the Department of Education and the Equal Employment Opportunity Commission. Hill claimed that Thomas had repeatedly asked her to have dinner with him, made lewd sexual remarks at work and (perhaps most famously) placed a pubic hair on his can of Coca-Cola as a prank. Her boss demanded to know who the culprit was — with a wink and a nudge. It’s all very funny, I’m sure, if you’re not the one putting up with this nonsense every day.

The media frenzy over the Thomas confirmation hearings, which were broadcast publicly, had an unintended effect: The controversy proved to be a tipping point in encouraging women, many who had experienced similar behavior from male supervisors, to come forward to discuss the sexual harassment they faced on the job. Reports of workplace abuse increased 67 percent the following year.

That case might have moved the discussion forward, but as women have repeatedly learned, the more things change, the more they stay the same.

It might not have mattered if he had. During the 2016 election, tapes surfaced of Donald Trump discussing sexually assaulting women with former “Access Hollywood” host Billy Bush. Despite the uproar, the controversy proved to be just a blip in a successful campaign. He is now the president-elect, just weeks away from being sworn into the White House.

Casey Affleck, who is currently starring in Kenneth Lonergan’s “Manchester by the Sea,” was sued in 2010 for sexual harassment by two female producers who worked with him on a previous production. Affleck settled those suits in arbitration. It has not stopped the 41-year-old actor from winning every critic's prize in sight for the acclaimed tearjerker and he is likely on his way to receiving an Academy Award for Best Actor. With his garnering support from his brother, Ben Affleck, and childhood friend, Matt Damon, the case has barely come up on the Oscar trail.

Let’s pause here — just for a moment — to understand these women’s accounts. Magdalena Gorka, who was a producer on “I’m Still Here,” the mockumentary chronicling Joaquin Phoenix’s faux rap career, sued Casey Affleck, the film’s director, for $2.5 million. She claimed that he crawled into bed with her after the crew crashed at his apartment following a late night spent working on the film. Gorka also alleged that she woke up with her boss, who was extremely drunk, next to her in bed. Amanda White, who sought $2 million, further alleged that the director forced a male crew member to pull down his pants and show her his penis.

These women did what Schneider could not do back in 1972. They came forward.

But it’s easy to see, though, why so many women still remain silent. A 2015 Cosmopolitan study found that 1 in 3 respondents reported experiencing workplace harassment from a supervisor or office mate, and 71 percent of those women chose not to report it, fearing retribution. Despite the progress we’ve made in recognizing the issue, women have a lot to fear in the workplace. Homicide is the second-leading cause of workplace-related deaths for women, and the AFL-CIO has estimated that each year 36,500 employees are sexually assaulted on the job, with a majority of them being female.

Others keep quiet for fear that they won’t be believed. It took nine years before Schneider’s claims were taken seriously — and three years after her director verified her account publicly. Bertolucci claimed that his leading lady, who reportedly became suicidal after filming, told him he had “robbed her of her youth.” Far too many women, it seems, know exactly what she’s talking about.