Will the House Freedom Caucus rescue Obamacare (without meaning to) through sheer intransigence?

If GOP rebels fight Paul Ryan's repeal-and-delay plan, as they fought any deal with Obama, things could get weird 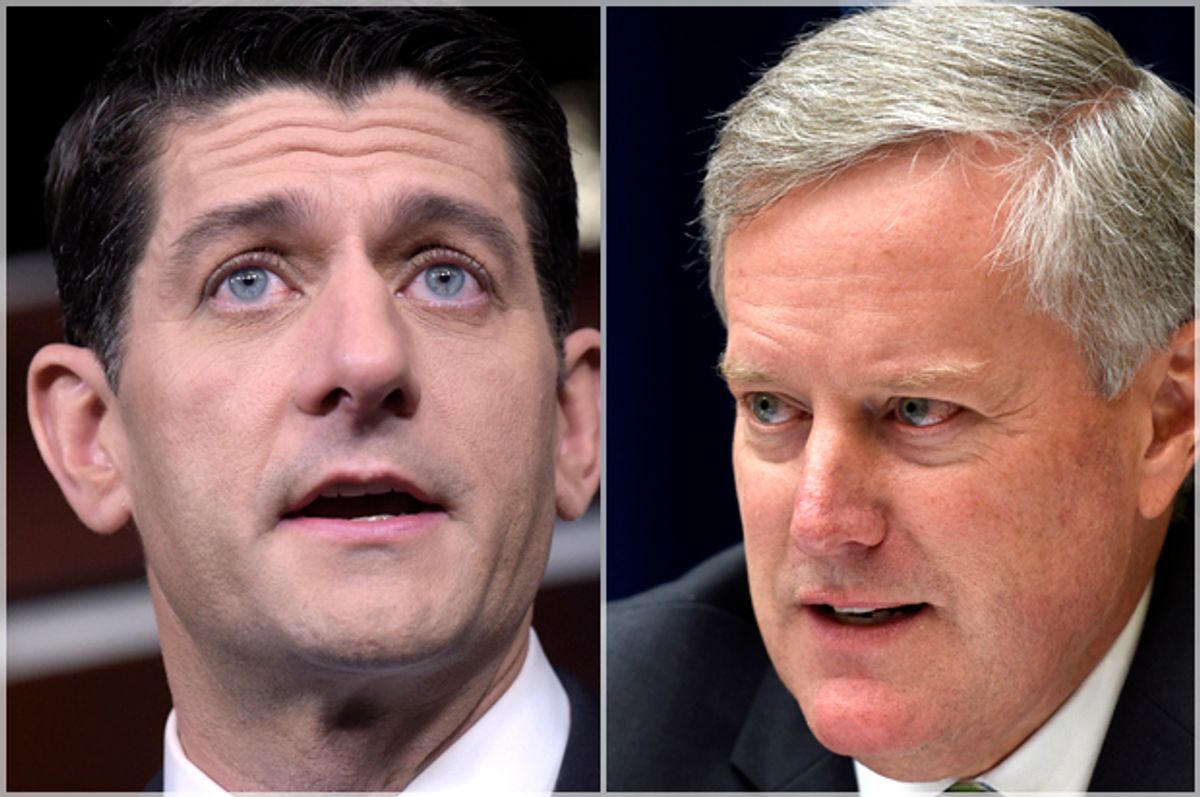 What a difference eight years makes. At this point back in 2008, President-elect Barack Obama was systematically putting together his Cabinet, studying policy briefs and pretty much keeping a low profile as he and his team prepared to take over the most important job in the world. Obama did some interviews and made himself otherwise available to the press from time to time, but there were no victory rallies or abrupt reversals of decades of diplomatic protocols.

As the inauguration grew closer, Obama gathered bipartisan luminaries from both parties to break bread with him, get to know him a little bit and understand his overall strategy. He spent an evening laying out what he called a "grand bargain," which was described by one attendee, The Washington Post's E.J. Dionne:

The "grand bargain" they are talking about is a mix and match of boldness and prudence. It involves expansive government where necessary, balanced by tough management, unpopular cuts — and, yes, eventually some tax increases. Everyone, they say, will have to give up something. Only such a balance, they argue, will win broad support for what Obama wants to do, and thus make his reforms "sustainable," the other magic word — meaning that even Republicans, when they eventually get back to power, will choose not to reverse them.

The pillars of the grand bargain were health care reform, "entitlement reform," tax reform and limits on carbon emissions.

The White House immediately set up a  fiscal responsibility summit and the president told his staff that he expected the "difficult choices" that had to be made about Social Security and Medicare to be made on his watch. He reportedly said, "We've kicked this can down the road and now we are at the end of the road."

As we know, president George W. Bush's financial crisis had the world economy in a tailspin, so Job No. 1 was to try to keep it from crashing and burning. The first order of business was an economic rescue package and it was an unexpectedly heavy lift and gained only a handful of Republican votes for a much smaller stimulus than was necessary. Nonetheless, it did pass and managed to provide some breathing room.

The White House and the Democrats spent the next year trying to pass health care reform and managed to do it only with party-line votes and parliamentary maneuvering. The Republicans were not going to help and therefore had no stake in making the program sustainable. Nonetheless, the president persisted in this idea that if Democrats could achieve "balance" by giving the Republicans some of what they wanted, such as cutting "entitlement" programs in exchange for letting the Bush tax cuts expire on schedule, he could get a buy in for his grand bargain.

The passage of the Affordable Care Act angered the Republicans so much that it created the grassroots uprising known as the Tea Party, which propelled the GOP into capturing a majority in the House in the 2010 midterm election. Nonetheless, the president did everything he could to make good on his offer, creating bipartisan commissions to create consensus and repeatedly putting Social Security cuts on the menu in budget negotiations.

The Republican leadership under then House speaker John Boehner knew it was the chance of a lifetime to have Democrats do their dirty work for them — cutting Social Security was the GOP establishment's dream although their constituents' nightmare — but they could never get the hard-core Tea Partyers to sign on. They simply refused to accept anything apart from total capitulation, which required that the president agree to all their terms, including the repeal of Obamacare, his signature program. So the president wised up and the proposed Social Security cuts were finally abandoned, much to the relief of most Democrats.

But this fight fueled the Tea Party types with growing hostility against their own party and its political leadership. They did not trust Republican leaders in the House and Senate and refused to believe that more obstructionist tactics wouldn't force the president and a Democratic Senate to do their bidding. That mistrust flowed into the strong anti-Establishment atmosphere that gave us candidate Donald Trump in 2016.

The logic of President Obama's grand bargain always seemed dubious. Republicans would never feel any commitment to health care reform just because they got something else they wanted. They don't think that way. In any case, Obama never got his grand bargain and now the Republicans are strutting about declaring that they will finally fulfill their No. 1 desire immediately after Trump takes taking office in January: repeal of the hated Obamacare.

But it appears that the more things change the more they stay the same. According to Salon's Sophia Tesfaye, the usual infighting among Republicans is heating up already. Paul Ryan and Mitch McConnell's plan to "repeal and delay" Obamacare on a slow timetable, until they can put together a replacement down the road, isn't going over very well with the Tea Party's Freedom Caucus. It seems those members want a repeal accomplished immediately and as usual they refuse to compromise.

Ryan and McConnell are trying to delay for purely cynical political reasons. They want to leverage the possibility that people will lose their health care to force Democrats to the table to sign on to whatever flimsy piece of garbage they come up with to replace the current law. If they can delay the worst elements of this change until after the 2018 midterm elections and force Democrats to run showing support for the replacement plan, the Republicans can get this done without too much political damage. They can read the polls showing that the hostility to Obamacare is dissipating now that they have a Republican president. It turns out that most of their voters really just hated Obama, not his health care law.

Nonetheless, the true believers of the Freedom Caucus and some conservative movement groups like the Koch brothers' FreedomWorks have lurched into gear demanding that the repeal of Obamacare take place immediately — and thereby setting up another showdown that could end up stopping the repeal altogether. It would be an amazing twist of fate if just as they inadvertently saved Social Security, the Tea Party loyalists ended up thwarting Donald Trump and saving Obamacare because they simply cannot take yes for an answer.