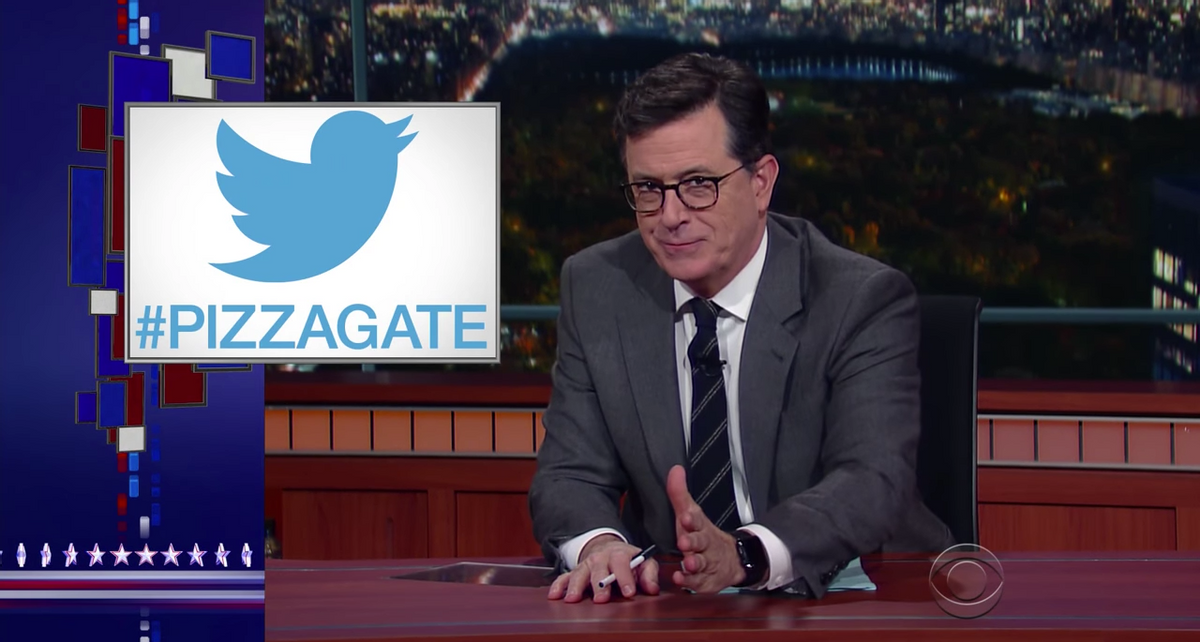 "Late Show" host Stephen Colbert worries that, in light of all the fake news stories, some viewers may actually think he's a journalist, or at the very least, a pundit.

"I really hope you don't get your news from me because news flash: This isn't news, this is entertainment," Colbert reminded viewers, before providing suggestions.

"If you want news go to CBS's John Dickerson or maybe The Wall Street Journal, but don't go to some anonymous guy on social media because a lot of the news is a lie," Colbert warned.

Fake news is having such an influence on our lives that even the Pope weighed in on the issue this week.

"Pope Francis said, 'Media that focus on scandals and spread fake news to smear politicians risk becoming like people who have a morbid fascination with excrement,' and if the Pope's talking poop you know we're in deep doo-doo," Colbert remarked.

He then turned to what appears to be the craziest fake news of all: Pizzagate.

"People actually believe a conspiracy theory that Hillary Clinton and her former campaign manager John Podesta ran a child sex ring at a pizzeria in DC," Colbert told the audience, just in case they had missed this bizarre story.

"This is a lie," he continued. "We all know the only people who are trapped in a pizza place are those robots at Chuck E. Cheese... now according to the folks with the spider eggs hatching in their brains, Clinton/Podesta have a series of smuggling tunnels that connect to the basement of this pizzeria, but police refuse to investigate the basement crime scene on the flimsy excuse thatthe pizzeria does not have a basement... that's how deep this goes, ground level."

The conspiracy theory originated from "alt-right" Trump supporters sifting through Clinton campaign emails following the Podesta/Wikileaks scandal. After noticing more references to pizza and pizzerias than they had expected, they landed on this bizarre explanation.

Colbert did: "I decided the guy who spread this bullsh*t shouldn't be in charge of national security."

Donald Trump's transition team did the right thing in response, sort of. After deciding the act was disqualifying, they fired Michael Flynn's son for tweeting about pizza gates.

"Whew, we really dodged one of the bullets here," Colbert said in response to the lunacy.

“Here’s what these conspiracy theorists don’t get," he continued. "There’s a difference between a conspiracy and an agreement... Conspiracy is what villains do. An agreement is what adults do."

And Colbert had just one request for the fake news propagators:

"Wikileaks, Alex Jones, and these subreddit sub-geniuses, and I mean this in the nicest way possible: Grow the f*ck up.”